Sure, you could spend a rainy day in British Columbia holed up in a cosy cabin watching a storm rage through the window. Or you could entertain yourself indoors, by exploring a great museum, for example.

But what if you just ran outside, lifted your palms to the sky, and revelled in the rain?

Spoiler alert: you will get wet. But with the right activity, the right training and gear—and the right attitude—it will be worth it. Here are five ways to really embrace the rain in British Columbia. 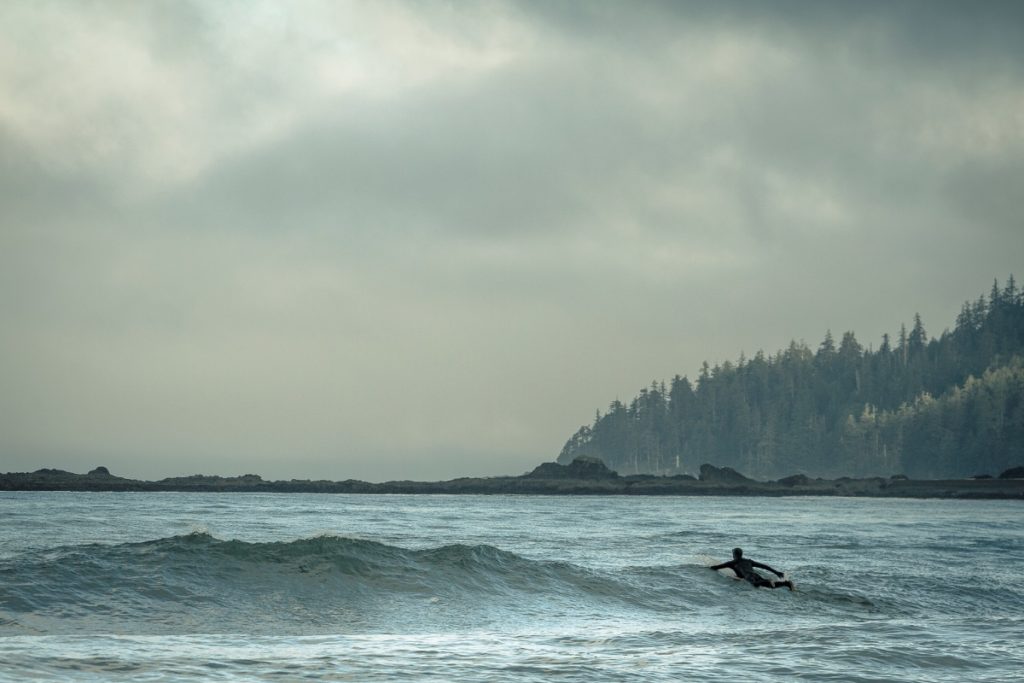 “What are you? Made of sugar?” As Tofino surf shop Surf Sister points out on its FAQ page, a little rain shouldn’t stop you from surfing–you’re going to get wet in the ocean anyways. In fact, “rain is often ideal for surfing as it usually means the wind is blowing offshore, which is the best winds for surfing”. So pull on a wetsuit, grab a friend, and run into the ocean like a kid. (Safety first, of course.)

While Tofino and Ucluelet are BC’s go-to spots on Vancouver Island, other areas also offer swells in winter. In Northern BC, Haida Gwaii’s North Beach is a good surfing option for uncrowded beaches and dramatic scenery. 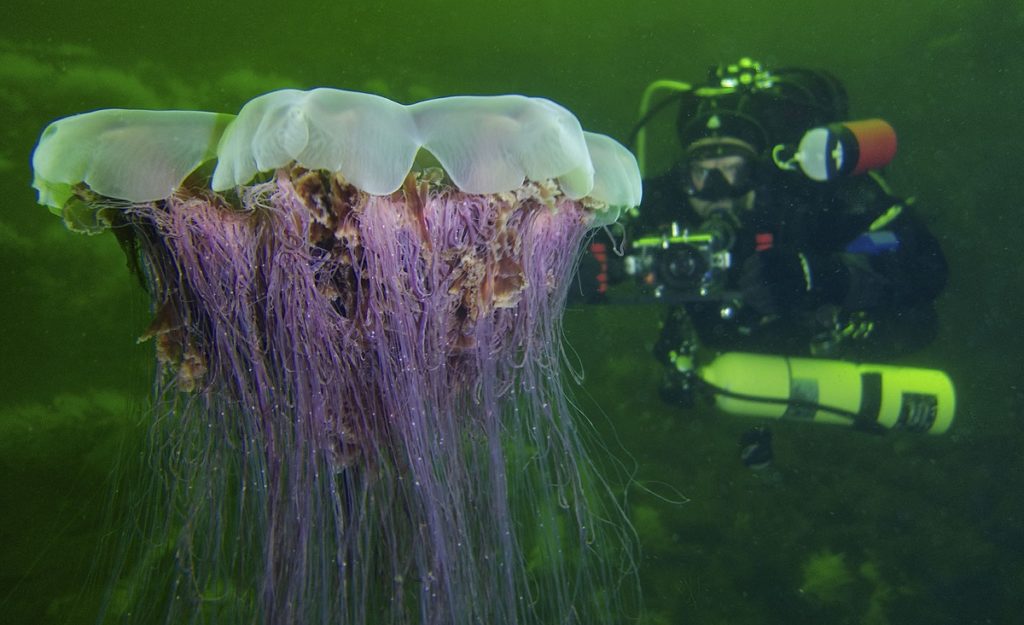 There’s a whole new world underwater in BC. Photo: Seaproof.tv

What can you see? Just giant pacific octopus, wolf-eels, six gill sharks, soft corals, huge cloud sponges, immense red sea fans…Jacques Cousteau himself said that BC has “the best temperate water diving in the world, and second only to the Red Sea.”

Most dive shops offer lessons, and a good place for beginners is one of the many shore-accessed dive sites in Victoria, Nanaimo, Campbell River, the Sunshine Coast, and Vancouver. More advanced divers will want explore shipwrecks encrusted with marine life; the BC Wreck Trek Passport lays out a circuit from Vancouver. 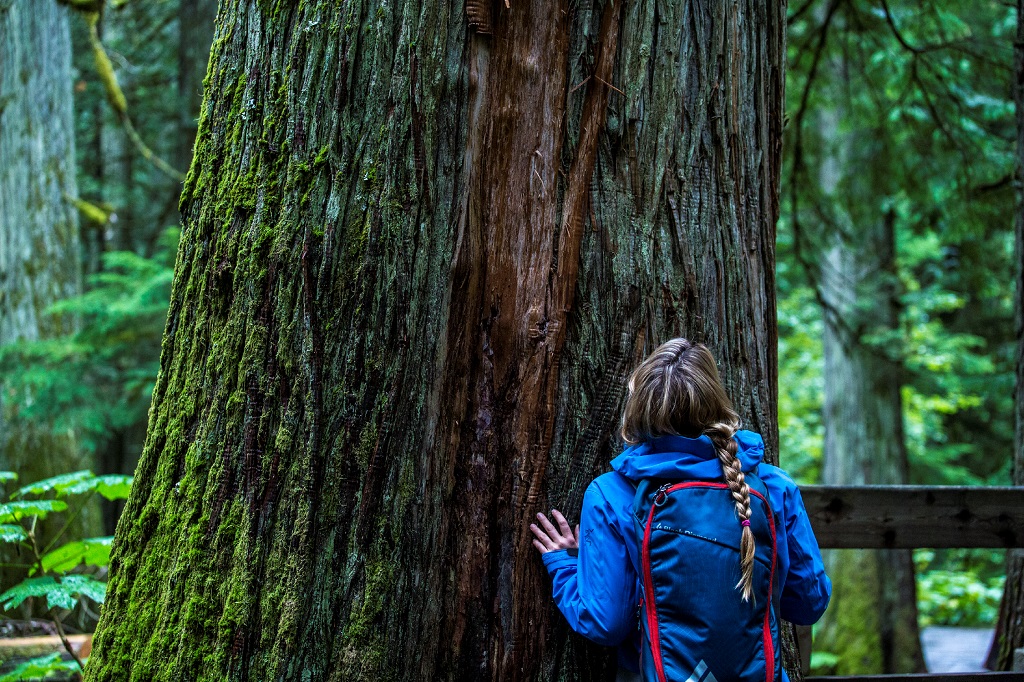 They don’t call it forest “bathing” for nothing, and there are plenty of benefits to soak up along with the rain. Translated from the Japanese term shinrin-yoku, forest bathing is a cross between walking and meditation that is said to promote good health. The intent is to slow down and notice your surroundings and interact with the forest using all your senses. Feel the on your cheeks, contemplate the beauty of a raindrop on a leaf, and appreciating the texture of the lush green moss.

BC has plenty of places where you can practice forest bathing on your own. If you’re looking for a guided practice, Nature with Haida offers guided forest therapy walks on the Sunshine Coast. From their base in Parksville on Vancouver Island, Pacific Rainforest Adventure Tours take guests on a gentle walk through an off-the-beaten-track forest with old-growth trees and native plants. The company works with Tigh-Na-Mara Seaside Spa Resort & Conference Centre as part of their Reconnect Package. 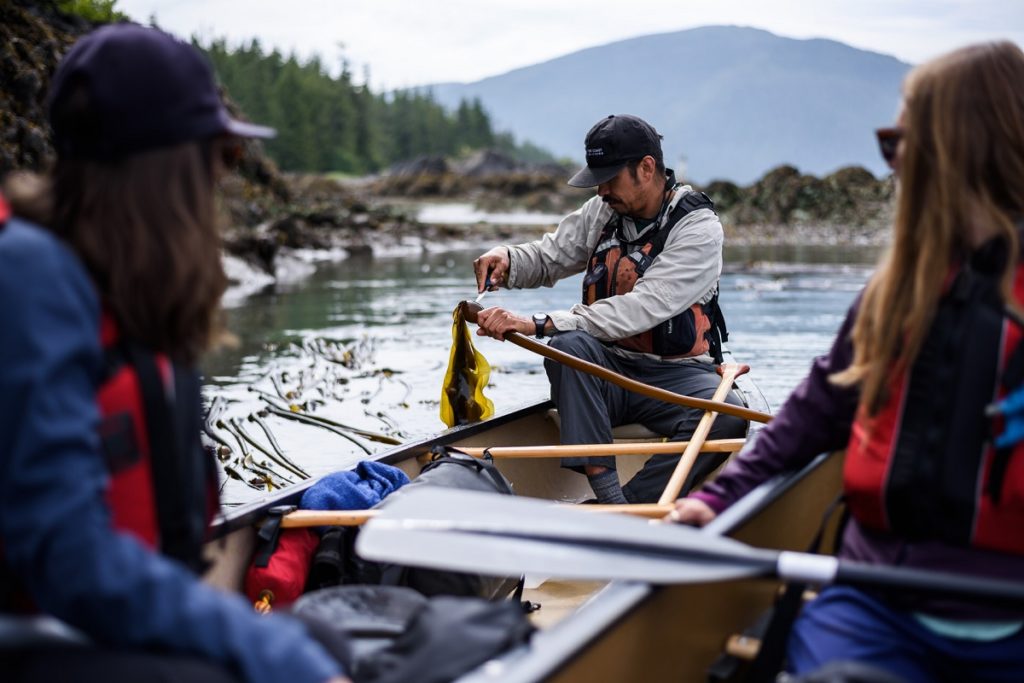 Prince Rupert is one of the rainiest places in British Columbia, but that doesn’t stop its residents from getting out on the water. “Our climate is so mild that even if it’s rainy, you can enjoy the same activities year-round,” says April Link, who co-owns Outer Coast Outfitters, an outdoor adventure company based in the northern BC city. The key is to dress appropriately—those who live in rainy climates like to say that there’s no such thing as bad weather, only bad clothing.
For some people, the rain makes the wilderness experience even more intimate. For example, on one recent rainy canoe trip around Lelu Island, Outer Coast’s guide pitched a tarp on the beach and built a fire, creating a safe, cozy shelter from the elements.
For those who want to test their mettle, Outer Coast is developing a series of outdoor survival skills workshops teaching people how to forage for food, build a shelter, and build a fire. As Link notes, “It’s a much bigger challenge to build a fire in the rain than it is in good conditions.” Who wants to be the hero on your next camping trip? 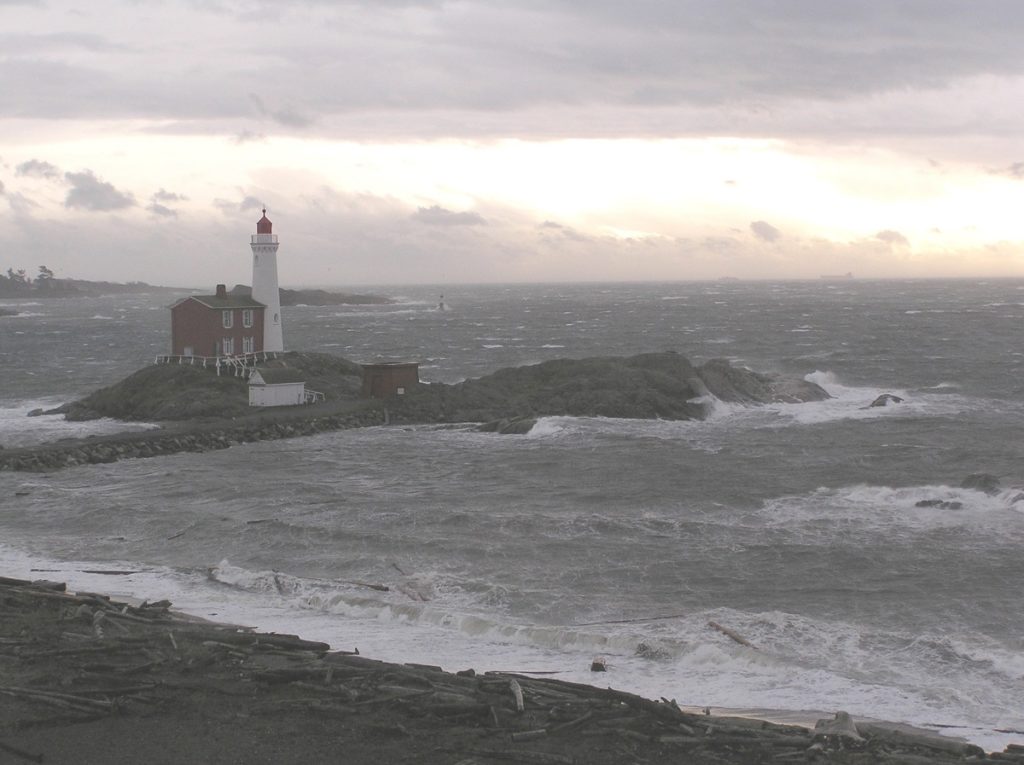 Lighthouses have offered hope to mariners for centuries, and those who tend to them don’t shy away from inclement weather. You can find out more about what it’s like to be a lighthouse keeper at Fort Rodd Hill and Fisgard Lighthouse National Historic Sites near Victoria. On an audio tour, you can learn about the people who have made history at the oldest lighthouse on the Canadian west coast since 1860. Inside, you can play old-fashioned games that the lighthouse keepers would play to pass the time, as well as modern video games that test how well you could steer a 19th-century schooner into the harbour.

Outside, you can brave the rain to watch bald eagles soar above and spot great blue herons on the shoreline, along with harbour seals, sea lions, and even river otters. The Garry Oak Learning Meadow comes alive with wildflowers from spring showers. And of course, capture the waves crashing on the nearby bluffs for Instagram—there’s a reason this picturesque spot boasts a lighthouse.

Note that while the park is open year-round, during the off-season the lighthouse and historic buildings are only open on weekends; check hours here.

No matter what outdoor activity you are planning, be prepared and be safe. AdventureSmart is a great resource to help you get informed before heading outdoors or on the water. Remember the three Ts–trip planning, training, and taking the essentials.

Brush up on your coastal safety knowledge and be CoastSmart.