Note: This story was originally published in September 2017.

Canada is wildlife central, and British Columbia arguably has the most diverse species on offer, from green herons and grizzly bears to orcas and trumpeter swans. Fall is a wonderful time to go wildlife watching because it’s not too hot, the aspens have just started accenting the evergreen forest with yellow and gold, and the air takes on an inviting crispness. Just be sure to keep your distance from wildlife—30 m (98 ft) minimum, and even further, at least 100 m (328 ft), from predators such as bears. Go wildlife watching early or at dusk, when animals are the most active. Here are some of the top spots to see BC’s incredible critters.

Grizzlies on the Coast of the Great Bear Rainforest

Autumn is peak grizzly season on the wild west coast, and fly-in Knight Inlet Lodge is a great place to see them. The Glendale Cove area has one of the largest concentrations of grizzly bears in the province. Situated 80 km (50 mi) north of Campbell River, the conservation-minded lodge focuses on safe viewing in the bears’ natural environment. You might see some of the 50 grizzly and black bears feasting on salmon within a 10-km (6-mi) radius of the floating wilderness resort, which is specially designed for optimal animal observation. You can also sea kayak along the pristine rainforest coast, take a marine wildlife tour, and whale watch until mid October. The lodge books out well in advance so make sure you are booking well ahead of when you want to visit. Pack a zoom lens!

Salmon in the Fraser River, near Vancouver 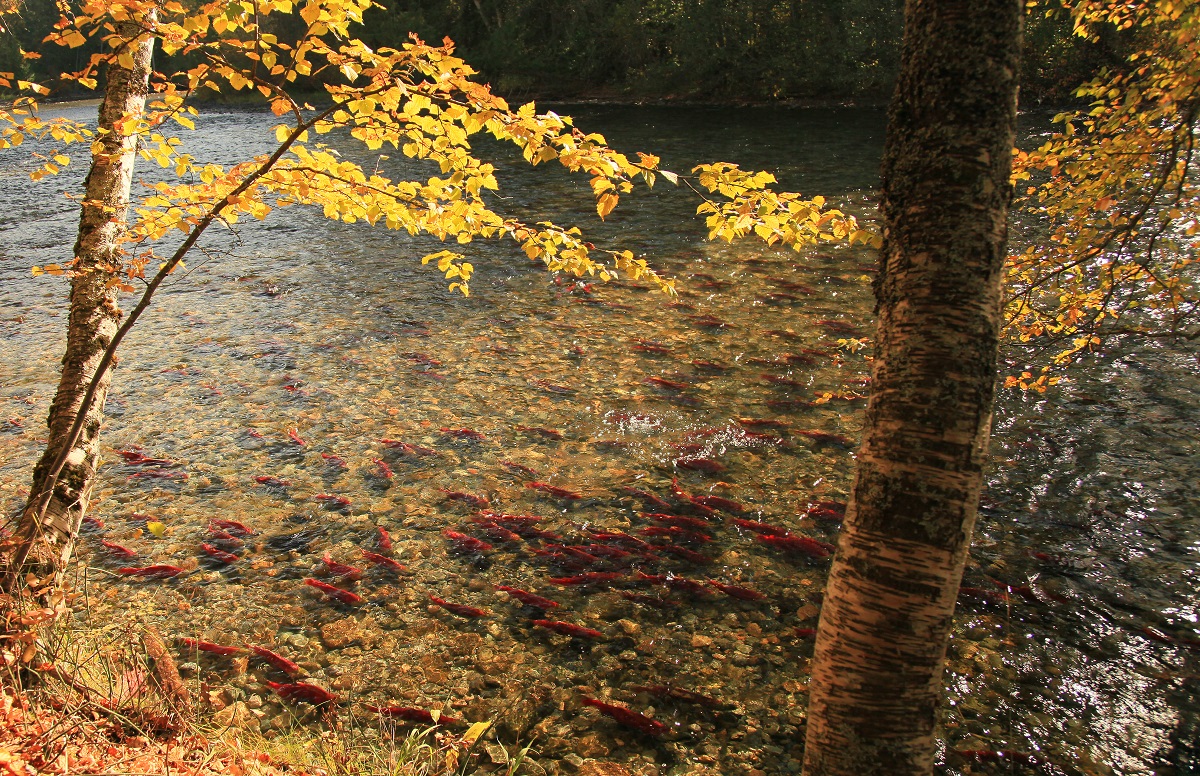 The story is iconic: wild salmon begin the arduous journey from the ocean back to where they were born to spawn at the main stem of the Fraser River each year from late September to early November. It’s one of the planet’s largest salmon runs. You can see all five Pacific salmon species, too, on the 1,375-km (850-mi)-long waterway — steelhead, coho, pink, chinook, and sockeye. If you’ve never seen the battered, crimson-hued fish fighting their way upstream, especially when they get to the shallow northern streams at the end, it’s a stirring sight. And of course, the spent carcasses attract hungry bears, eagles, and gulls by the thousands. If you want to learn more, visit one of the hatcheries near Vancouver: Chilliwack River Hatchery, Abbotsford’s Fraser Valley Trout Hatchery (which also has steelhead and cutthroat), or the Capilano Salmon Hatchery in North Vancouver, where you can combine your visit with a picnic and hike. Check out other places around BC to view salmon spawning here.

You can see bighorn sheep in spring and summer at the Rockies’ Radium Hot Springs, but the real drama unfolds in fall: rutting season, October into November. That’s when the rams of the 140-strong herd convene in town and start clashing, literally, for hours at a time in competition to win female attention. The 300-lb (140 kg) bachelors taunt, kick, and then charge each other at 35 kph (22 mph), rising up on their hind legs to bash each other’s 30-lb (14-kg) horns with incredible force. The sound? Like a sledgehammer—so loud you can hear the crack a mile away.

Birds in Victoria, on Vancouver Island 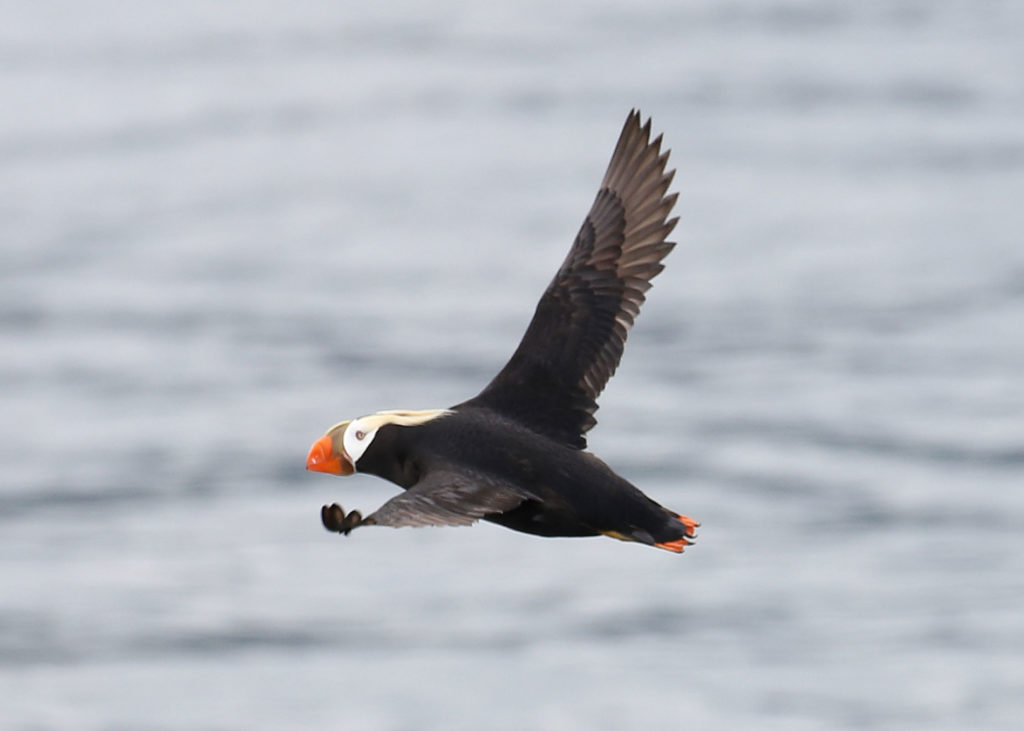 Though all of BC is pretty much a birdwatcher’s dream with over a million feathered creatures winging their way annually through the Pacific flyway, birders and biologists pinpoint Vancouver Island’s south coast as the hot spot. The mild winters make the tree-lined shore especially inviting to all kinds—including skylarks, not often seen in North America, and rare species such as tufted puffins, plus tiny humming birds, marbled murrelets, warblers, and red-breasted sapsuckers. In particular, Victoria’s Clover Point on Dallas Road buzzes with calling birds. Autumn is migration time for 14 species of raptors, in particular Turkey Vultures at East Sooke Regional Park, flying in huge packs of 200 to as many as 1,000 as they prepare to cross the Juan de Fuca Strait. Also on the move are flocks of American Pipit, skylarks at the airport, and gulls of many kinds on the coast.

Moose in Prince George, Northern BC 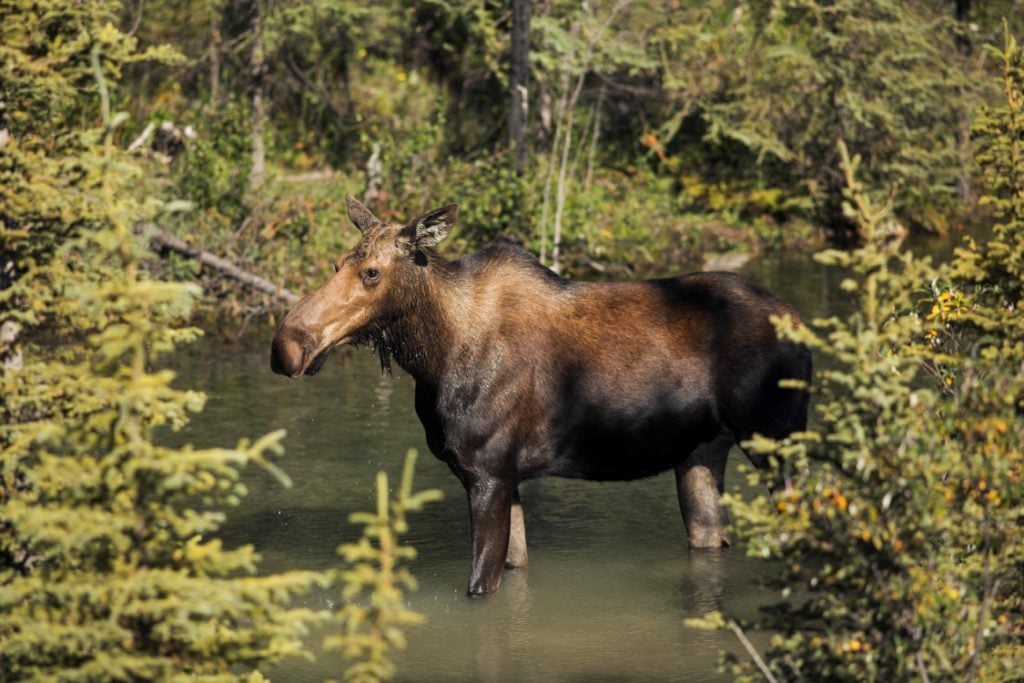 Moose? You’ll want to head to Prince George, home to the highest density of these hooved giants in North America and BC’s largest species. In fact, 70% of the province’s moose live in Northern BC. Grown bulls with impressive sets of velvety antlers stand some 6.5-ft (2-m) tall and might weigh 1,100 lbs (500 kg). Late fall is rutting season when the usually solitary ungulates gather in groups of eight to 10 and lock horns. Listen for the cows’ loud, moaning call designed to lure a mate, and take care because moose can be aggressive at this time of year. Look for moose in clearings and valleys; they prefer open spaces with plenty of shrubs and brush to munch on and marshy areas surrounding lakes, and are easiest to find in the early morning. Try either Highway 97 from Pine Pass to Old Friend Creek or Highway 16 from Prince George to Valemount in the southern Rocky Mountain Trench. Another option is canoeing the Crooked River just north of town or in Bowron Lake Provincial Park. Chances are good, too, that you’ll spot bears, caribou, mule deer, and thousands of migratory Canada Geese.

Make sure you are informed, prepared, and aware at all times when viewing wildlife in BC. Wildsafe BC is a great resource for making sure your wildlife experiences in BC are positive and conflict free.