“How many Canadians have actually seen a grizzly bear in the wild?”

It’s a rhetorical question, but Doug Davis has a point. While Canada is known for its vast expanse of wilderness, not many Canadians have actually seen a grizzly bear roaming in its natural habitat. After all, most of us live in cities within a few hours of the US border, and we are more accustomed to looking out for Starbucks than bears.

Davis however, goes bear-watching all the time. The captain of Prince Rupert Adventure Tours for over 25 years, he takes visitors into the Khutzeymateen Grizzly Sanctuary every summer and helps first-timers like me spot bears. I suspect he’s used to seeing the look on my face, which is the same mixture of wide-eyed, slack-jawed awe that I see on the faces of my fellow passengers who have come from as far as Germany, Australia, the US, and the UK–many of them just for this moment. 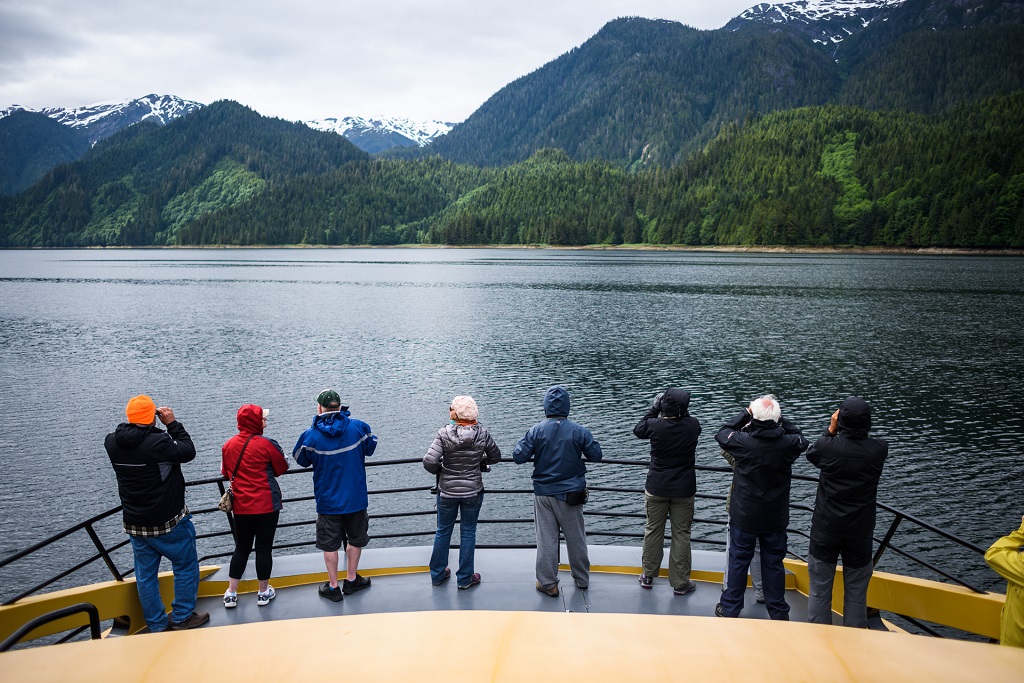 The view from the front deck on Prince Rupert Adventure Tours in the Khutzeymateen. Photo: Andrew Strain

Part of the awe is indeed the setting. The Khutzeymateen is pure wilderness—a 44,300-hectare (109,465-acre) area that was preserved in 1994 as Canada’s first designated grizzly bear sanctuary. Accessible only by boat or floatplane, it feels like an untouched pocket of the earth, with rugged peaks towering 2,100 metres (6,900 feet) above a valley of wetlands, old-growth temperate rainforests, and a large river estuary. Much of the land surrounding a fjord contains a high density of grizzly bears, which are attracted to the Pacific salmon spawning in the streams and the sedge, a high-protein grass at the water’s edge.

Davis explains that the 50 or so bears in the Khutzeymateen tend to stay in the same area their whole lives; males live about 25 years, and females about 35 years. He’s gotten to know them over the years by observing them from afar. He recognizes individuals by their location and markings–such as a scar on one’s forehead–and even by their personalities. “We used to call that one Big Ears,” he points out, “until he grew up and grew into his ears”.

From the bridge, Davis uses binoculars to constantly scan the landscape for wildlife. That includes marine wildlife: before we’d even reached the sanctuary, he had slowed the boat to point out seals, two humpback whales, and a pod of five transient orcas. And from the calm waters inside the sanctuary, he spotted the first bear of the day. 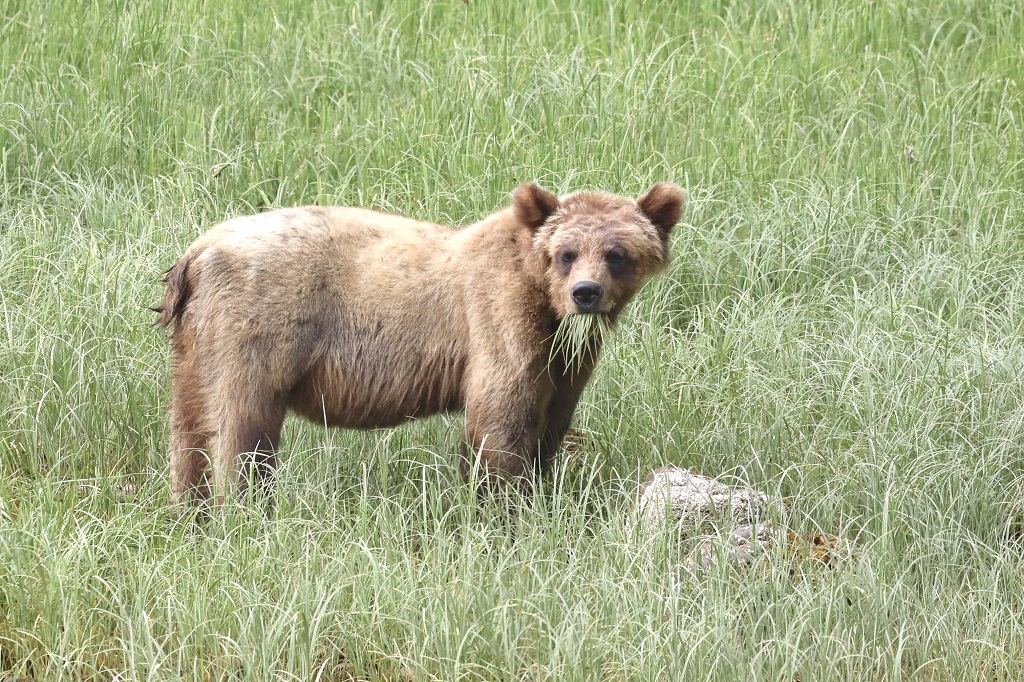 A bear munches on the sedge in the Khutzeymateen. Photo: Doug Davis/ Prince Rupert Adventure Tours

The bear was quite far inland from the beach, so watching it was kind of like watching Madonna at a stadium concert—you get the thrill of seeing her in person, but you really need to look at the big screen to confirm it’s actually her. When the animal came into focus in my own binoculars, it wasn’t what I expected. Muscular yet skinny, this bear was, well…a bit unkempt. “It’s a male,” noted Davis. “They’re neglecting themselves because it’s mating season.” The males are so focused on trying to mate, he says, they don’t eat as much, and they get roughed up from fighting each other for female attention. It was a thrill to watch the bear go about its business, munching the grass of the sedge and slowly lumbering along the beach. 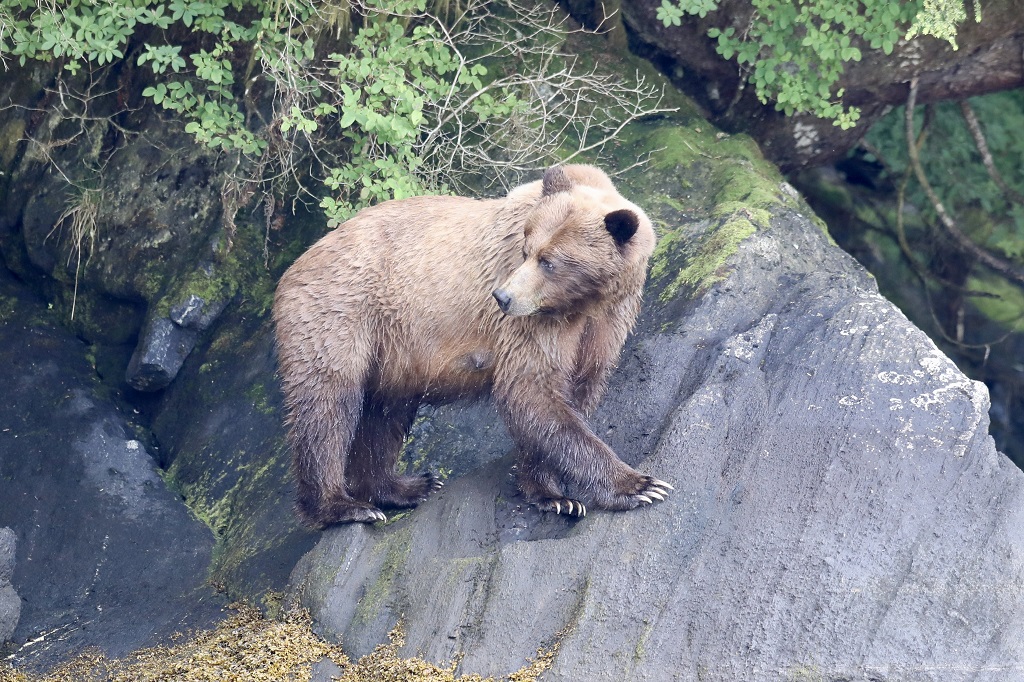 A mother grizzly bear looks back on her cubs in the Khutzeymateen. Photo: Doug Davis/Prince Rupert Adventure Tours

We went on to spot several more males that day, but the undisputed highlight was a mother with her three cubs. Closer to shore this time—about 30 metres (98 feet) away—we watched as the sow walked along a ledge between the trees and the water’s edge, her cubs padding along in single file. The family was close enough to see with the naked eye, but binoculars allowed me to see some amazing details. Look at those long, strong toenails—and yowza, so sharp! See those cute little round ears! (Teddy bears, Davis told me later, are modelled on grizzly bears.)

There were about 90 people on the boat that day, yet the deck was virtually silent as we stood transfixed for half an hour, willing the bears to stay in view. We had been briefed on bear-watching etiquette: stay quiet, no flash photography, no food on deck in order to not disturb the bears or alter their behaviour in response to humans. One might think that we’d all be jostling for the best spot at the rails, but the vibe was generous: people shuffled around to let others have a better view, and offered binoculars to strangers. It was as if we each individually recognized that this was such a special experience, we wanted everyone to share it.

As the mama bear waded into the ocean, she looked back at her cubs, checking to make sure they were following her. They held back, hesitating. Realizing they weren’t going to follow, she finally turned around, lumbered back up to them, and then led them off down the beach. The scene was so peaceful, so gentle, that it stirred the soul. 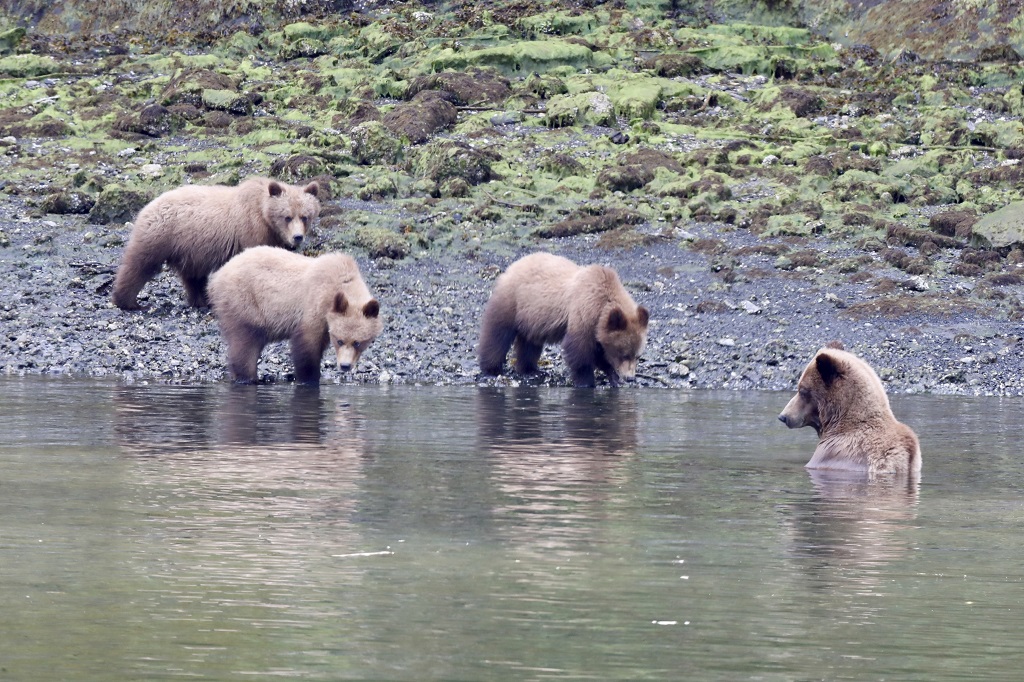 A sow goes for a dip while her three cubs look on. Photo: Doug Davis/Prince Rupert Adventure Tours.

“Grizzly bears are not these big, ferocious animals that people think they are,” Davis said to me later. Indeed, when you see them in their natural habitat, you realize how small they actually are–not in relation to humans, but nature.

As the boat pulled away from the shore, the bears became tiny specks on the landscape and then disappeared completely into the immenseness of the wilderness. There was nothing but forest and ocean as far as the eye could see. It was as if the camera had panned out to look at the Earth from above, and it was beautiful.

I wasn’t the only misty-eyed person on that boat, and it wasn’t because of the light rain. Watching a bear in the wilderness is a primal experience. It’s one that takes you away from the city—and closer to putting everything into perspective.

Where to Go Bear-Watching in BC

Khutzeymateen Provincial Park is one of many places to go bear-watching in BC. It’s part of the Great Bear Rainforest, which offers myriad opportunities for nature experiences. Find the top places to spot bears in BC here.

This video offers another perspective on bears in BC. Hereditary Chief Mike Willie describes his people’s connection with the land and animals  near the Broughton Archipelago off Vancouver Island.

When you are hiking, biking, and camping in BC, you are in bear habitat. Make sure you are informed, prepared, and aware at all times. Wildsafe BC is a great resource for making any bear experiences you may have in BC positive and conflict-free. Be sure to keep your distance from wildlife—30 m (98 ft) minimum, and even further, at least 100 m (328 ft), from predators such as bears. The safest viewing experience—for humans and bears—is with an experienced guide.