If you are new to snowshoeing, or don’t like to do a serious trip up a mountain, there are a lot of great easy snowshoe trips that you can do around Prince George. The Ancient Forest/Ancient Forest/Chun T’oh Whudujut Provincial Park sits 113 kilometres (70 miles) east of Prince George. The Ancient Forest is an interior temperate rainforest full of old cedar trees, many of which are estimated to be at least 1,000 years old. It is beautiful during all the four seasons of the year, but I think that my favourite time of the year to visit it is in the winter. 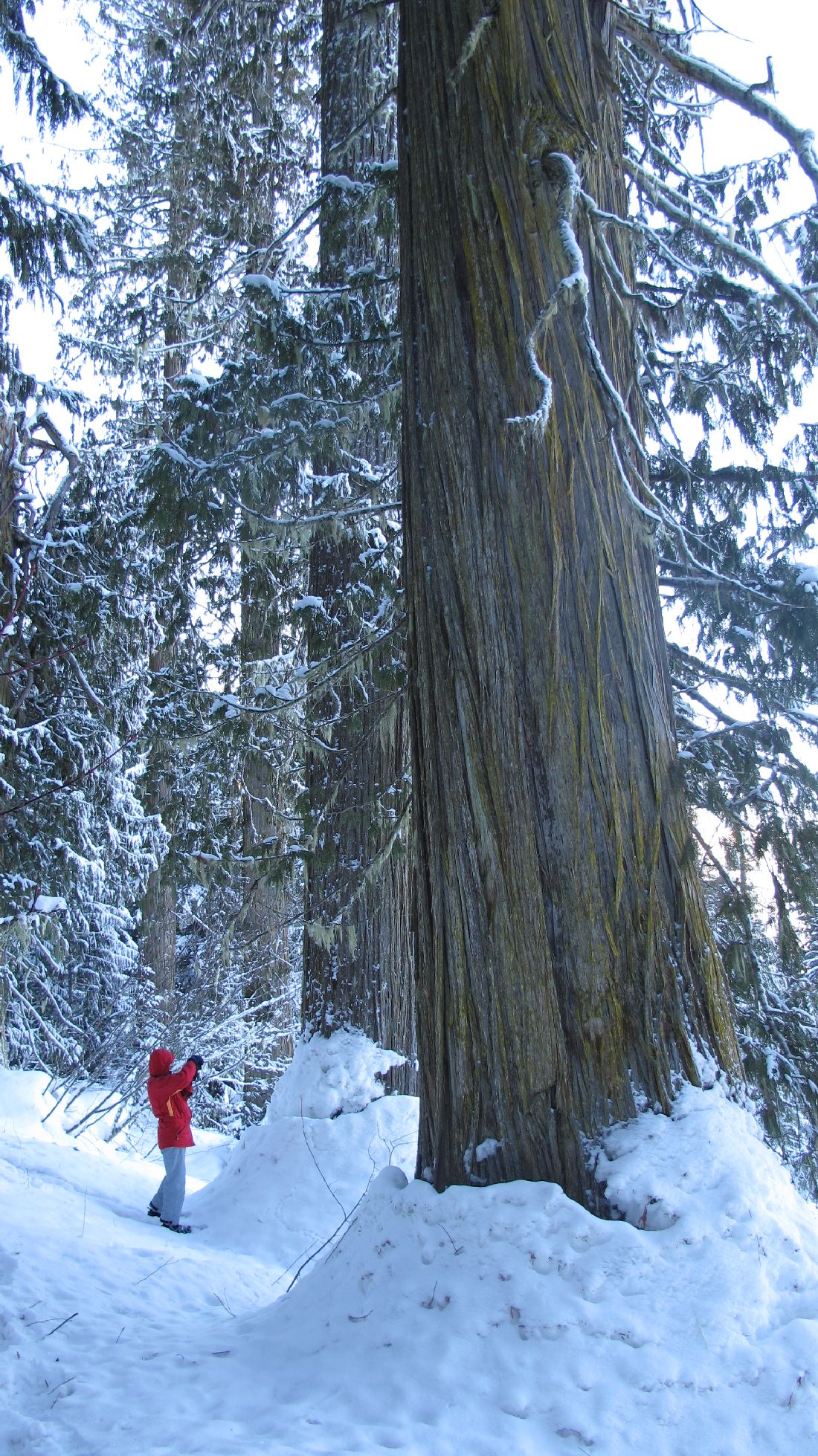 It is called a rainforest, but it’s more like a snow forest as it gets a lot of precipitation year round. Because of the amount of snow that it receives in the winter, it is a great place to snowshoe.

On the day that I came out with my friend, we started up the trail on the west side entrance. It was a colder day and I noticed that there was a lot of beautiful hoar frost on small trees. If you haven’t seen it before, it looks like delicate feathers from a distance. 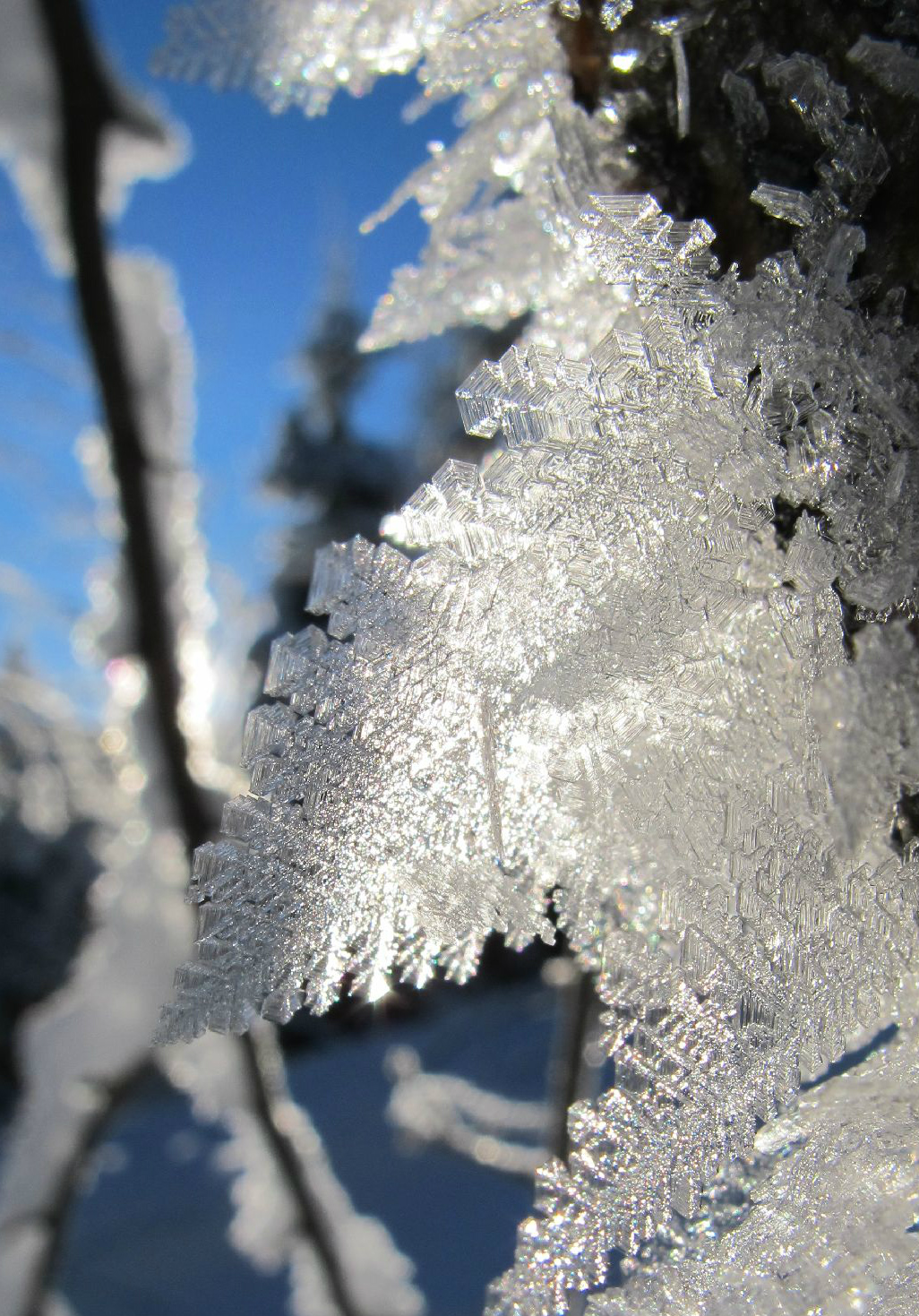 The first thing we noticed when entering the forest is that the trees look so pretty with the snow swept up against their bases. We followed a snowshoe trail until we reached Big Tree. After taking it in, we continued on through the forest. Even with the plants and flowers covered in snow, you will find a lot of things to look at,  like various animal tracks in the snow and the towering trees. With the lack of plants to add colour, the yellow gold-dust lichen on the old cedars stands out too. 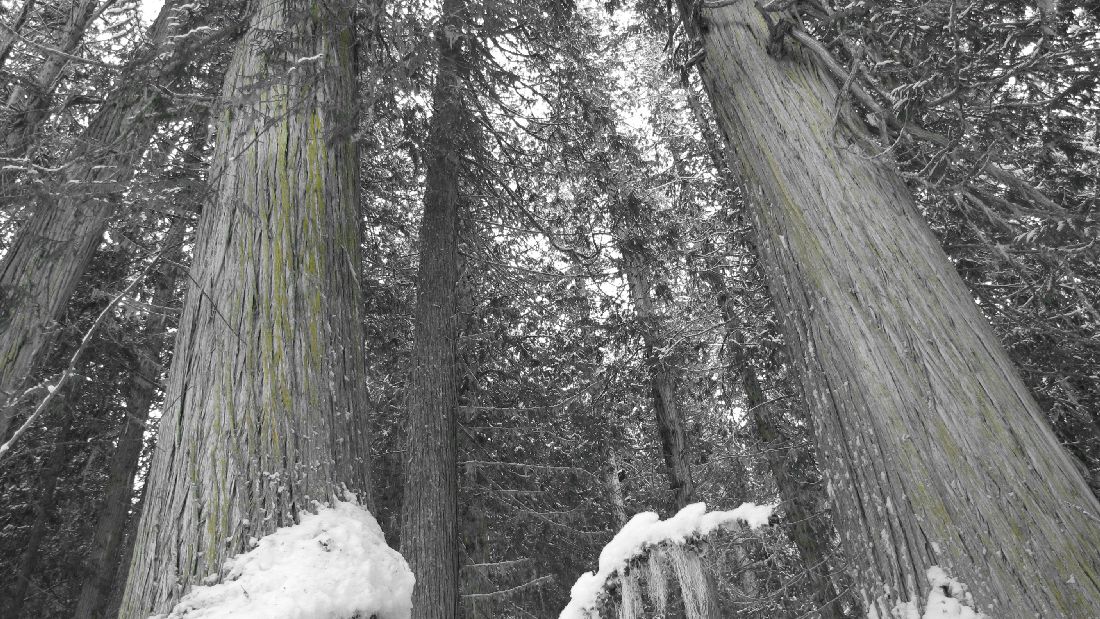 We eventually started making our own trail and it was wonderful to snowshoe on lots of fresh powdery snow.  It was so deep, that I am sure that if we took our snowshoes off, we’d be buried in it. 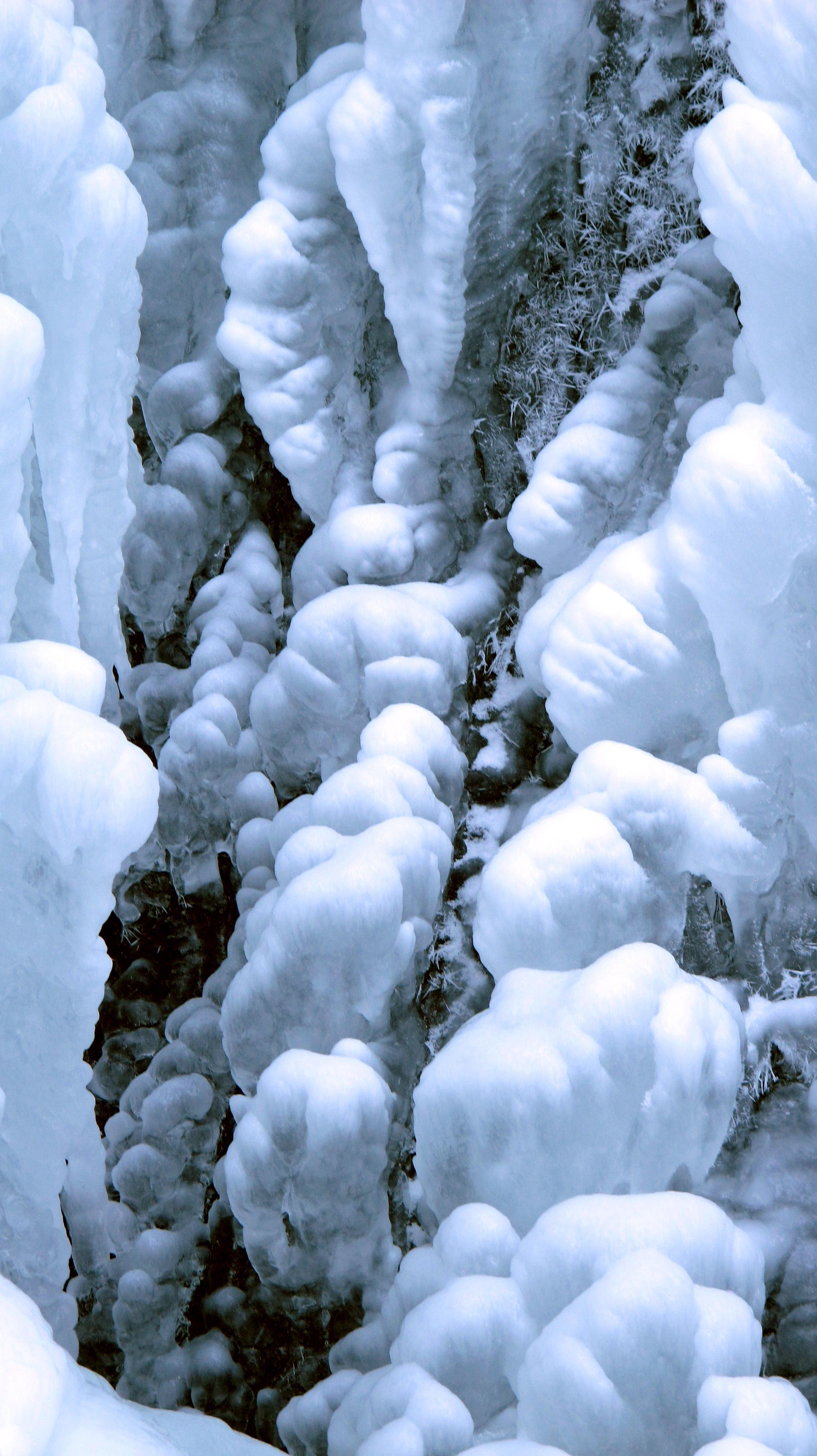 We eventually made our way to Treebeard Falls. In the winter, the water that tumbles over the Treebeard waterfall is silenced as it’s buried underneath frozen ice and snow. It is still very pretty to look at with its beautiful ice sculptures covering the flowing water underneath. 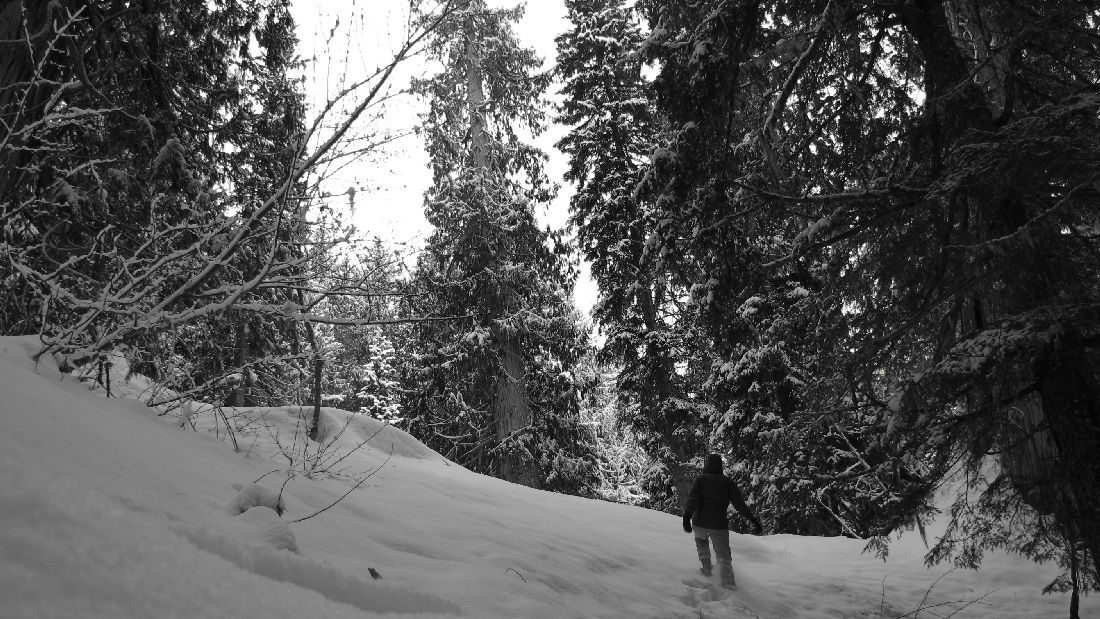 After visiting the falls, we explored more around the forest. Eventually, we come across the very scenic views below of Dimsdale Mountain and Mount Sir Alexander. 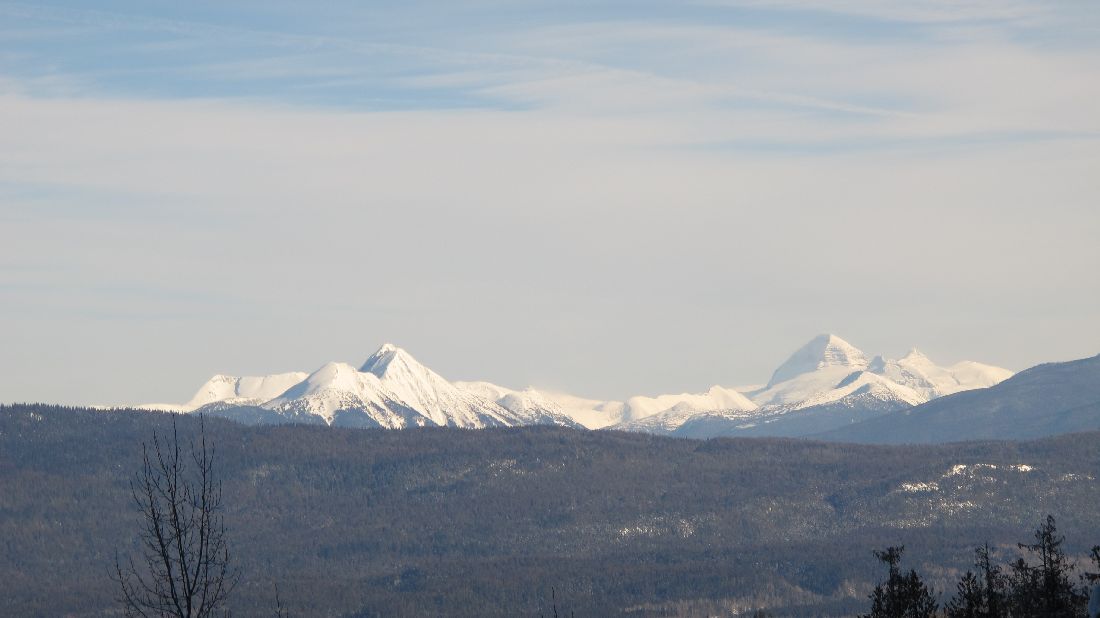 After spending most of the day wandering around, it was time to head back to our vehicle to warm up and head home.

The trail in the summer is at least 2-kilometres (1.2-miles) long, depending on the route you take, but you can spend a good day wandering around the forest in the winter. If you are visiting Prince George or McBride, British Columbia, in the winter, I’d take the time to drive out to the Ancient Forest.

If you’re curious about what the Ancient Forest looks like in the summer, and also want to learn a little more about the forest and the universal boardwalk that was built, check out the blog post BC’s Ancient Forest: A Natural, Accessible Wonder.