Sometimes in life, we just need a new perspective. That’s exactly what you’ll get exploring BC’s scenery and wildlife from the water—not to mention some wet ‘n wild thrills along the way. British Columbia is a huge, wild province with 27,200 km (1,6901 mi) of shoreline, some 400 rivers and 20,000 lakes, and 640 provincial parks protecting that pristine nature. Here are some of the best, most exhilarating ways to see the province’s waterways.

From a whitewater river raft 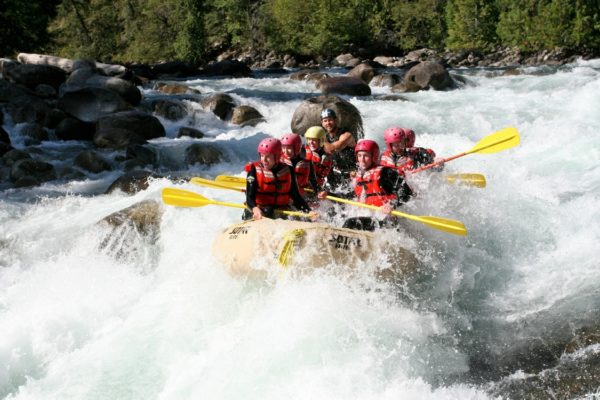 First, choose your speed: Paddle or float? Then figure out what you want to see and time it right: the season runs late April to early October. On Vancouver Island’s clear Campbell River, you can join an easygoing float tour or snorkel with thousands of spawning salmon with Destiny River. The outfitter also leads sunset full moon standup paddleboard (SUP) tours around the estuary, class II and IV rapids on the island’s largest volume river, the Nimpkish, and wildlife viewing on the Southgate next to the untamed, iconic Great Bear Rainforest.

Other top options are the Nahatlatch River, a tributary of Vancouver’s mighty Fraser River, for whitewater, glamping, and yoga, and a scenic trip down the Fraser, BC’s longest river, for front-seat views of Mount Robson, the Rockies’ highest at 12,972 ft (3,954 m). Dip into some of North America’s most sporty class III and IV rapids on the Elaho near Squamish. Or if you like it extreme, blast through 14 rapids on southeastern BC’s Kicking Horse River, framed by canyon walls and the Canadian Rockies. End the day with a dip in the Radium Hot Springs outdoor mineral pools.

Cabins nestled in the trees along the shore of Lake O’Hara in the mountains of Yoho National Park. Photo: Carrie Cole

Set in the Rockies, Lake O’Hara is the one in your mind’s eye: placid, neon-blue, ringed by steep, jagged snow-capped peaks and hanging valleys. In Yoho National Park on the Continental Divide, it’s a magical place, and remote, which only enhances the mystique. Stay in the off-the-grid split-log lodge and take guided day hikes—or just take in the tranquil lake setting from a deck chair.

Combine SUPing, boating, beach time, and vineyard tastings in and around massive, deep Okanagan Lake in southern interior BC’s arid wine country. In south-central BC, Shuswap is the hot spot for houseboating on the water; while Kootenay Lake, among BC’s largest natural lakes, is near historic Nelson and optimal for all water sports.

There’s Alouette Lake in Golden Ears Provincial Park, a top choice for windsurfing and waterskiing, plus swimming, canoeing, boating, and fishing. Kalamalka Lake is a huge lake in BC’s interior just outside Vernon, surrounded by tranquil grasslands, bluffs and ponderosa pines. A favourite for its lakeshore beaches, it’s a go-to for canoeing, fishing, swimming, waterskiing and wakeboarding. But what makes it special is its glowing iridescent colour that fluctuates from greenish-blue to indigo, depending the time of year, earning it the nickname “lake of 1,000 colours.”

Orcas in the aquarium are one thing; seeing Earth’s largest dolphins from your sea kayak is another altogether. Vancouver Island is where you want to go for epic ocean paddling adventures, including ample wildlife viewing on shore and in the water, or far-flung Haida Gwaii, a bucket list destination for experienced paddlers. This is an isolated archipelago off the mainland’s northwest coast of misty islands steeped in Aboriginal culture, best accessed by the water. Then there’s Vancouver Island’s Ucluelet near Tofino with top-rated paddle-touring through the Broken Group Islands, a must for backcountry adventurers, and the latest water trend, surf kayaking.

Globally famed for its canoeing and diverse wet-dry topography, the Cariboo’s 116-km (72-mi) Bowron Lakes Canoe Circuit is 11 km (7 mi) of portages connecting lakes, rivers and waterways—a six- to 10-day wilderness canoe odyssey in a remote wildlife refuge. Expect peaks and glaciers, towering waterfalls and sandy beaches, swaths of wild blueberries and the planet’s only inland temperate rainforest. In northern BC near Quesnel, Bowron is also a primo place for trout fishing and kayaking.

After you’ve explored BC’s waterways, find the best ways to get into BC’s mountains.