Every January, in the northern Cariboo region of British Columbia, an historic dog sled race takes place ear Barkerville, BC’s largest historic site. In the mid 1860s, Barkerville was at the centre of the Gold Rush; with over 10,000 miners along Williams Creek, Barkerville was the largest town west of Chicago and north of San Francisco.

The Gold Rush Trail Sled Dog Mail Run has been a part of Cariboo culture for 24 years, and until 1997, it was a qualifying event for the Yukon Quest and Iditarod sled races. In 1998, it changed from a competitive race to one that encourages fun and participation. Today, that is exactly what it is: a fun event for the whole family. Participants can be dog sledders, skijorers (where a skier is drawn over ice or snow by a sled dog or a team of dogs), cross country skiers, snowshoers, and kick-sledders – just about anyone who can travel over a packed snow trail! No wonder it’s such a popular event which attracts tourists from around the world. 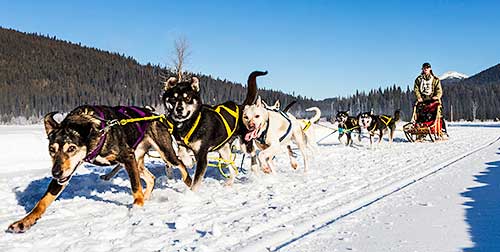 Everyone is eager to participate, including the dogs! 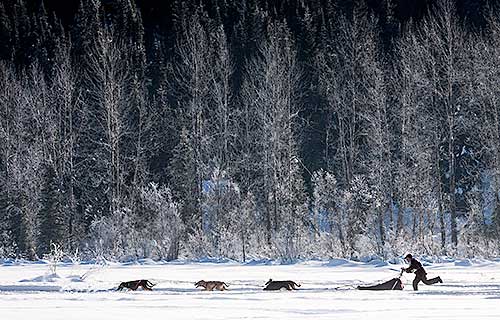 Approaching Barkerville. The race is on!

The race finishes with a “photo-op” finish in front of the Barkerville Post Office. There are many prizes to be won including “Stake My Claim” and “Official Mail Courier” certificates. 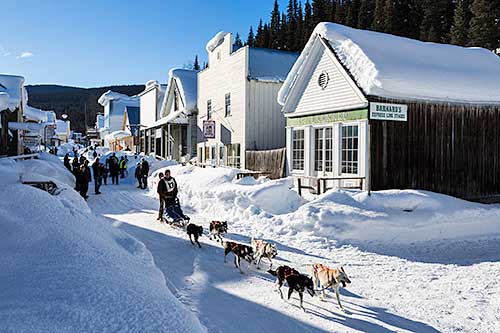 After delivering the mail, Mushers complete their journey through Barkerville’s main street

The historic dog race is a three day event that includes a celebratory banquet and auction at the Troll Ski Resort. Everyone is invited, and in true Cariboo fashion, a fun time is had by all. It’s one winter activity not to miss!

For further information about the race, and upcoming dates, be sure to visit their Gold Rush Trail Sled Dog Mail Run website.