I never intended to fall in love with Vancouver. When British Columbia began luring me north from Los Angeles, it was Whistler doing all the seduction. Its majestic mountains and snowy winters seemed like the yin to my hometown’s yang. Life in a ski town where black bears occasionally ramble past the door versus another hour in bumper-to-bumper traffic under a relentless sun? Whistler had me at hello.

Then I met Vancouver.

As cities go, she’s a dazzler. Glassy towers rise alongside ocean inlets dappled with lush forests and backed by snow-capped peaks. But what drew me in was something more.

Vancouver is a place where shoreline and urban core intermingle, like the fingers of two hands clasped together. At their juncture is an ethnically diverse Pacific Rim city that’s both urbane and outdoorsy, cosmopolitan and provincial, easygoing and hip—and as unabashed about its surging embrace of the 21st Century as it is about its rugged 19th century roots.

Bike paths wind, in a few turns of the pedal, from old-growth forest to city centre, always with the ocean close at hand. Five minutes in any direction leads to a stunning view, a different little neighbourhood with big character, a one-of-a-kind design atelier, a crazy-good eatery, a 1960s-era vacuum repair shop that has just the obscure part you need, a huge sports arena, a totem, a tugboat, the water’s edge, some cool public art, always more trees, another city beach. West Coast style and oceanfront living mash it up with high-density internationalism in a magnificent and moody Pacific Northwest landscape. One moment everyone in a packed izakaya restaurant is shouting greetings at the top of their lungs while small, delectable plates of savoury Japanese bar food come spinning out of the kitchen. The next moment, just a few steps away, there’s only a great blue heron banking on its broad wings low and quiet across the sea. 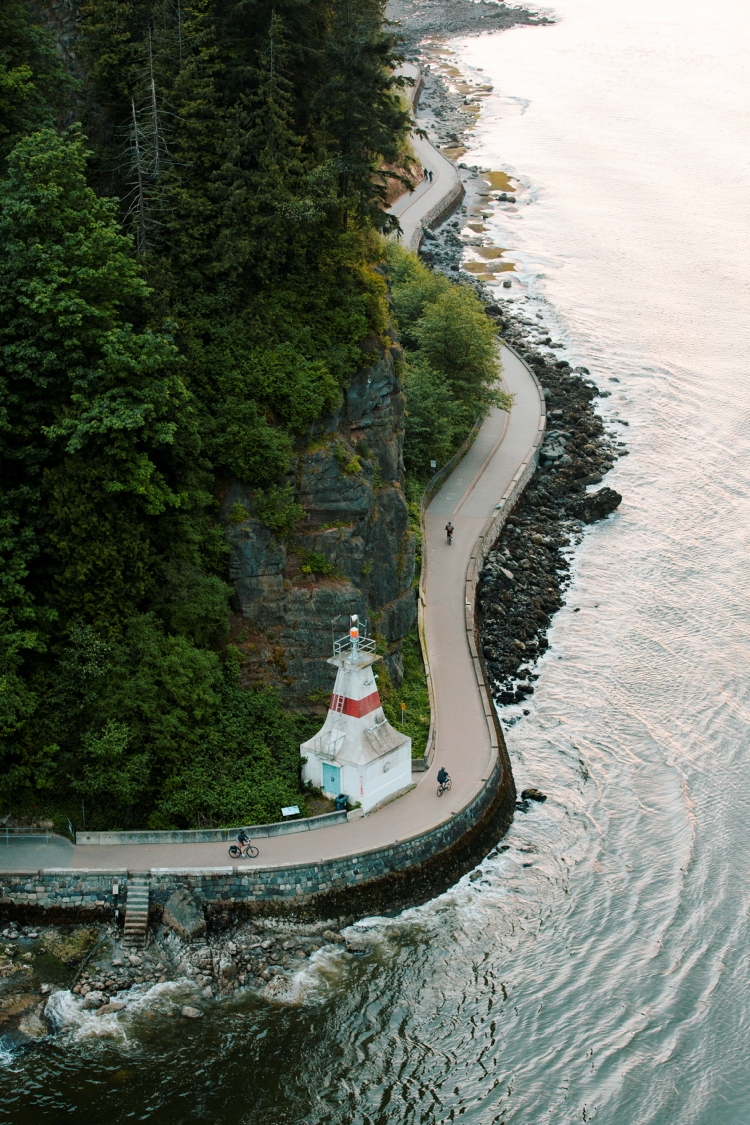 West Coast style and oceanfront living mash it up with high-density internationalism in a magnificent and moody Pacific Northwest landscape.

But I didn’t come to know any of this by calling Greater Vancouver home. I have never lived here. Instead, I discovered the breadth and depth of the city’s richness as a frequent visitor, a curious wanderer, a cyclist and flâneuse.

It might help if I back up a bit. While spending time in seductive Whistler, I met an awesome Canadian guy, fell in love with an actual human instead of a place, and got married. The husband lives near—but not in—Whistler, in a rural hamlet where farming is the dominant industry. Taking a leave of absence from Hollywood and Santa Monica for a dynamic, international ski resort was one thing. The quiet farm town proved to be another thing altogether. Too much yin and not enough yang. Also: No ocean. I found myself craving the diversity and stimulation of multi-ethnic, West Coast urban life like a fish out of water wants back in. Since then, I have visited Vancouver more than 200 times.

I have moseyed and meandered, run errands and gone to appointments, taken all sorts of classes and stayed in all sorts of hotels. I have couch-surfed, dog-sat, and cadged apartments. I have met countless writing deadlines from tables in the Vancouver Public Library and in crumb-flecked coffee shops, then cleared my head by biking across the city’s bridges in the breezy sunshine or by ducking into spacious yoga studios during torrential rain. 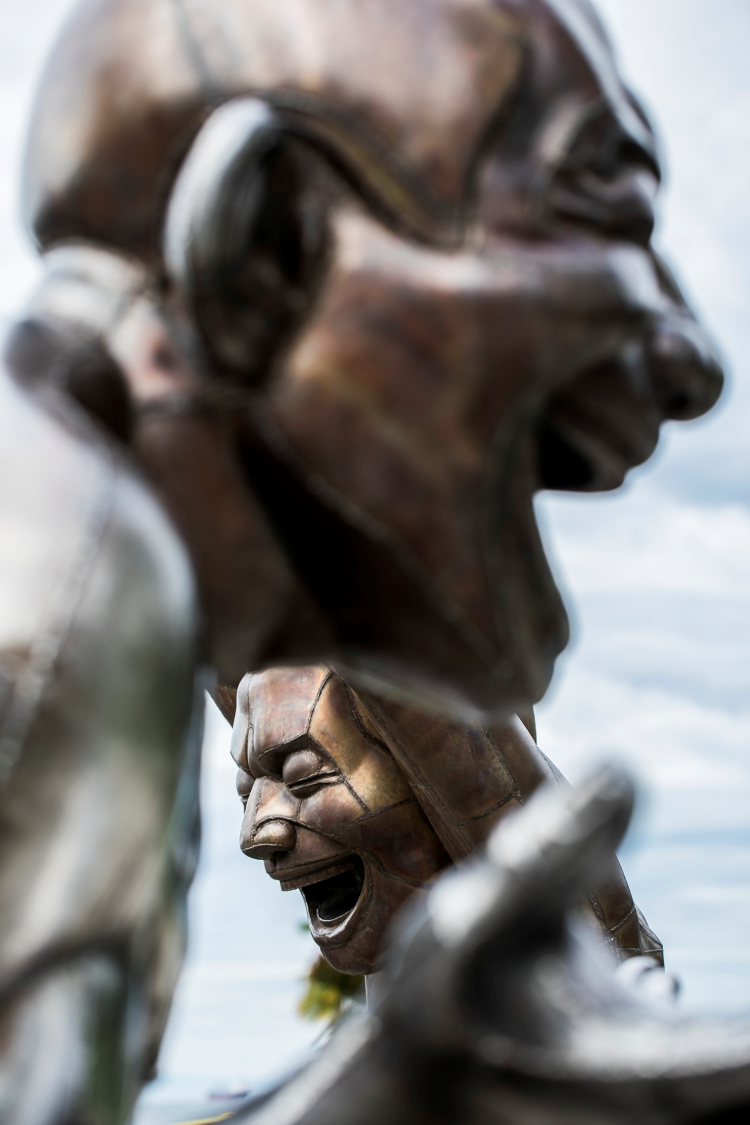 I have taken my big dog, Truman, to most of the city’s off-leash dog parks and beaches (there are 36), and taken my auto-immune self to every gluten-free bakery I can find (there are at least six that are very, very good). I have felt the din of NHL hockey games vibrate my bones, wandered through hundreds of artists’ studios during November’s annual Eastside Culture Crawl, and crooned along with 40,000 other fans to U2. And let’s not forget high summer, with the Bard on the Beach Shakespeare Festival, the teeming carnival midway at the city’s big annual fair (the Pacific National Exhibition), Granville Island’s foodstuffs and artisans, the expanse of Spanish Banks at low tide. The list keeps going on.

There is always something new to discover in Vancouver, or a favourite place to revisit (even during the 165 annual days of rain). I love how close the city’s 23 very different neighbourhoods are to each other, and how I can travel from one to the other via mini-tugboat ferry, light rail, point-to-point car share, a city bike, or my own two feet. I love the way all of Vancouver feels both West Coast familiar and somehow exotic. I love the city’s melange of cultures—a different mix than in California—and the soulful presence of so much Indigenous art. I know I am just one among many immigrants and visitors, yet I never feel that I don’t belong.

As I write this, another spring is unfurling across the Pacific Northwest. Alongside English Bay, hundreds of those great blue herons swoop thru the slaty sky, courting, mating, and building nests atop tall maples bordering 1,000-acre Stanley Park. Joggers emerge from hibernation, prancing along the Seawall in singles and triples and eights. Well-bundled older couples speak a United Nations of tongues as they amble arm in arm. Everyone savours the open brightness of the sea.

Then the daffodils come, and a riot of tulips, then the ravishing blossoms of 40,000 cherry trees. From the saddle of a bicycle, it’s possible to see the whole thing. I like to jump on a Mobi bike (the city’s bike share system) and pedal from English Bay and the West End to Main Street. The route weaves along False Creek (the big ocean inlet bordering the southern edge of downtown), slithering between sandy beaches (the city has nine) and grassy expanses (the city has more than 130 parks), under the trusses and girders of three signature bridges, past dozens of residential towers and a gaggle of yachts to the very end of the inlet and the edge of Chinatown. It’s a 20-minute ride. It takes me into the historic heart of the city—an area that’s had its ups and downs, and is once again on the rise.

I return the bike to a Mobi kiosk, and walk two minutes to a 16-seat udon house that serves a delicious lunch bowl of thick rice noodles tossed in a hazelnut and smoked chili paste topped with umami-seared greens. Lately, whenever I come to these few blocks of Main Street on the edge of Chinatown, there’s something new to explore—and so much to eat. Cantonese duck. Hawaiian poke. Hipster avocado toast. Vietnamese banh mi. Even flame-roasted all-vegan pizza on a savoury gluten-free crust.

I never intended to fall in love with Vancouver. When British Columbia began luring me north from Los Angeles, I thought I was just hungry—for a life change, a better balance of yin and yang, or maybe just a more interesting lunch.

Then I met this remarkable city. I’m a perpetual visitor, it’s true, but lately I feel like I’ve found my way home.

Susan Reifer Ryan has always led a dual life while working as an editor and writer—half in Los Angeles, and half in the mountains. She began her journalism career in the early 1990s covering sports, culture, and information technology before breaking into national U.S. magazines penning Hollywood celebrity profiles, then shifting to coverage of travel, adventure, skiing, and mountain life (a beat she has covered for more than 25 years). These days her writing spans a broad spectrum—and she remains one of North America’s leading authorities on smart ski-related travel around the globe. She is an expert in British Columbia’s ski destinations, and has long called Whistler Blackcomb her home mountain.