With the amount of water flowing through the area, there are plenty of places in BC’s Kootenay region to find waterfalls. However, finding information about them online is a different story. There wasn’t a list (that I could find) with great falls in the area, so I decided to create one covering five of my favourites that I’ve found in the year since moving here.

The bonus is that these five are family-friendly and great for a quick (but impactful) view. 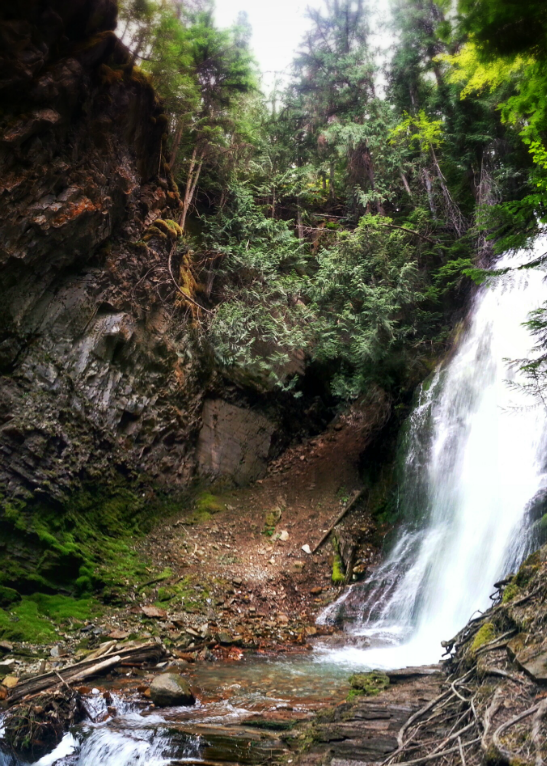 Standing in what feels like a Jurassic Park at Fletcher Falls. Photo: Gina Bégin.

When I moved to British Columbia, Fletcher Falls was the waterfall I was first told I had to go see. It makes sense — it’s noted by some as one of Canada’s most spectacular falls, and the hike in takes less than five minutes on a smooth, but steep path. Even with all this, it’s still unknown to many Nelson locals.

Nothing makes me more curious than the unknown.

Just south of Kaslo, these 15+ metre (49+ feet) falls drain the higher-altitude Fletcher Lake in Kokanee Creek Provincial Park. The trail to the falls leads you into a cavern-like amphitheatre where the falls pour over. Standing there, the trees hover overhead from crevices in the cavern’s rock wall. It’s a cool hike, even in the midst of the summer’s heat. When I finished snapping photos, I followed the flow of water for a minute and found myself on the beach of Kootenay Lake — wish I had brought a picnic and swimsuit, or even a tent, since camping is allowed there. 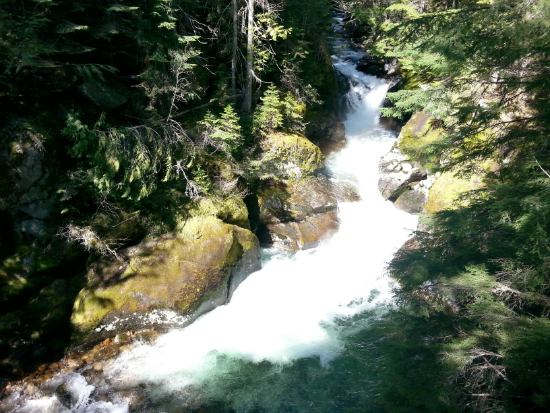 Turquoise water and vegetated banks made me feel like I was looking at falls in a tropical area. Photo: Gina Bégin.

I found these falls by accident. Being early in spring, the higher elevations still had snow, but I was ready to get outside. My friends and I decided to try a hike near Kokanee Creek Provincial Park, but ended up in the wrong area. But these things can lead to happy surprises, and this one did. The trail we followed, which we later learned was Canyon Falls Trail, was fairly level, shaded, and followed a lively mountain creek. We came to a crossroads with our choices being to continue on the path, or head up a steep set of stairs. We opted for steep.

It was short, but intense after such an easy approach. Almost immediately after getting up those couple of flights, we found ourselves in view of waters that stopped us in surprise. They carved through a short-walled, narrow canyon with great force, dropping over a ledge and churning through a bend before disappearing. We took photos for at least fifteen minutes, completely taken aback by this little treasure.

The trail overhangs the creek on the opposite side, so while it’s completely safe (and suitable) for children — of which I saw several on the trail — just make sure they don’t go sneaking under the railing at the fall’s lookout to explore.

These next three falls are on the more powerful side of things, and give you a taste of the force of nature.

Tulip Creek Falls in Syringa Provincial Park, 19 km (11.8 mi) northwest of Castlegar, was another happy accident. I was on my first exploration of the park, following the road along lower Arrow Lake. I didn’t notice the fall’s turnout until my return trip and even then, it looked so unassuming that I nearly kept going.

But I’ve learned in BC that it always pays to stop. As you head in from a the small turnout, the air cools, which I greatly appreciated after spending time along the sunbaked shoreline of the park. I had no idea how long the trail was, or what exactly I would find, but I was surprised by the canyon walls that grew up around me. There is hardly a moment to get comfortable in the surroundings before you round a bend and voila! — a thundering gush of water shoots out from the top of the land, feeding the creek you’ve been walking along. The water carved out a round amphitheatre here, just like at Fletcher Falls, but sunnier. Moss stains the rock walls, giving a colourful appearance. 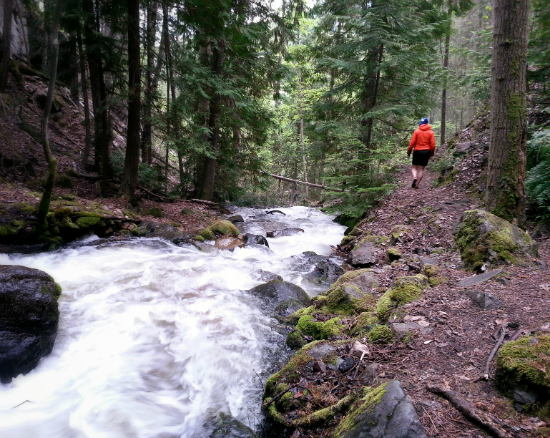 Right inside the town of Nelson itself are falls that, while short, are powerfully mesmerizing. Cottonwood Falls reside at one end of a park of the same name – Cottonwood Falls Park — with amenities like a gazebo and a path through a Japanese-style garden. The falls were still pumping in late summer when I visited and you can get right up next to them which helps you feel sucked in. You’ll also experience a little of Nelson’s free-spirited culture here; drum circles, yoga groups, slackliners, etc. all use this tucked-away park to gather and celebrate their varied interests. This is the shortest of the falls, both in terms of height and length of approach time, so it’s worth pairing up with a picnic. 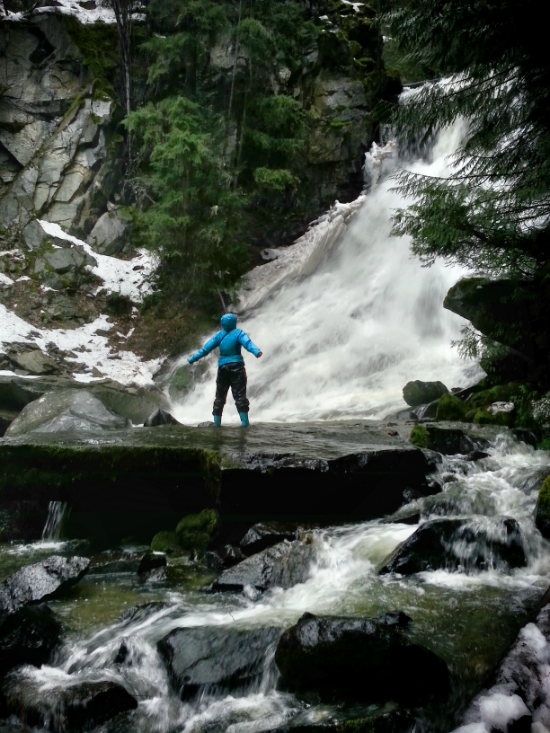 It was mid-February and these falls were still roaring. Photo: Gina Bégin.

My friend kidnapped me from work one afternoon, telling me she was taking me for a short hike. “We’ll only be gone for three hours,” she promised. Headed up the highway toward Castlegar from Nelson, we took the Glade ferry crossing and found the parking area across the Glade Creek Bridge. The path, it being early March, still had snow on it, but my trail crampons made easy work of it. I wasn’t expecting much, judging on the size of the creek, but when we reached the falls, I was taken aback. Trees and moss nearly shrouded the rocks it tumbled onto, fed by the spray of the falling water. It’s the kind of waterfall that makes you feel a bit humbled to be in its midst. If the water is shallow enough under it, there are some great photo opportunities in front of this spot.

There are two ways up to the falls; one trail takes off on the left side of the creek and follows it up, the other starts on the right in the forest and joins up with the creek later along. I recommend the latter; it allows you to walk directly under the falls unlike the first, which brings you on top of it (and it’s harder to get a good view).