Hooked on fishing? If you’re sitting at your desk daydreaming of a wilderness excursion that seems like it’s never going to happen, re-cast the scene. Even for urbanites, superb BC fishing is closer than you might think. You can catch and release monster sturgeon while helping biologists monitor the prehistoric species on the Lower Fraser River near Vancouver, go for the next record-breaking coho on the Cowichan River, or pull in bass and trout from the same spot, St. Mary’s Lake, on Salt Spring Island. Here are five top angling destinations within a four-hour drive of Vancouver, or just a few more hours from Seattle. 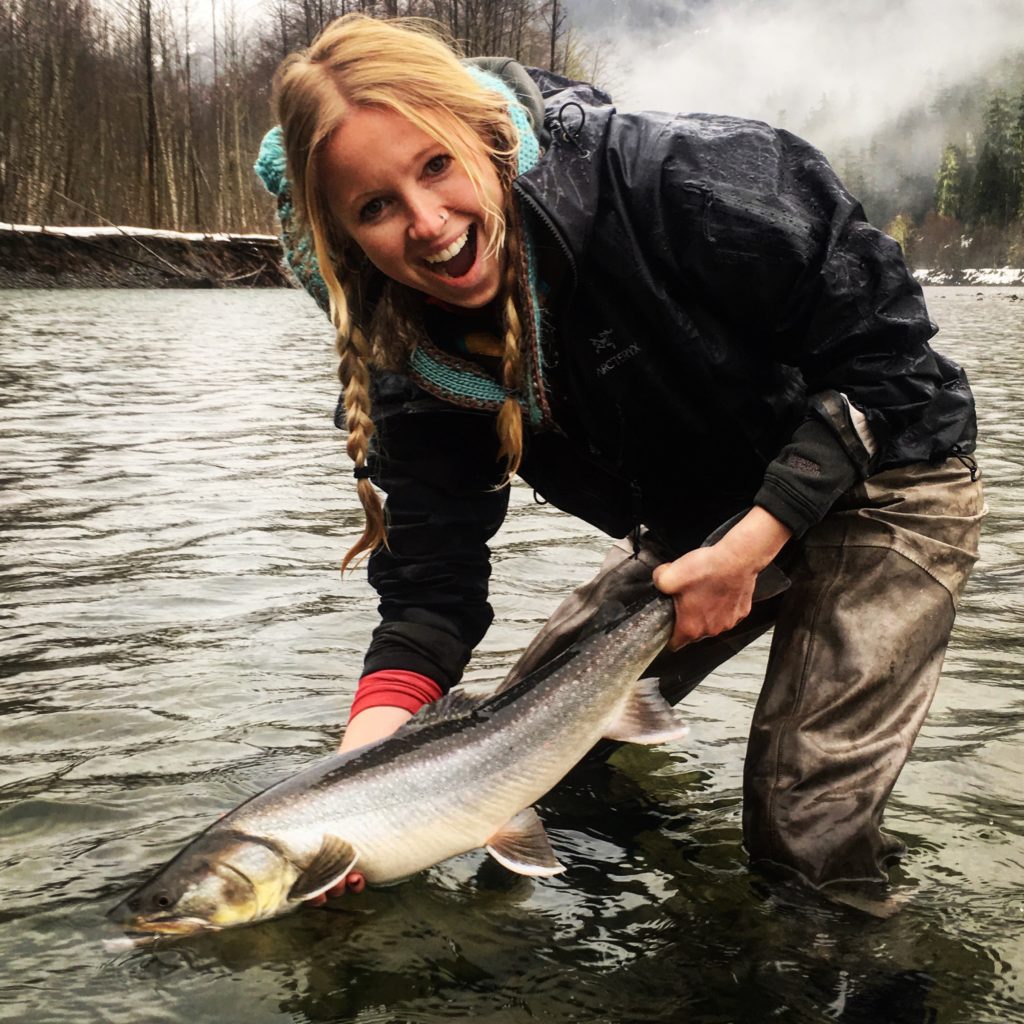 In addition to being an outdoor adventure playground, the Whistler/Pemberton area is prime river-fishing country. The scenic drive takes about two hours from Vancouver north to Whistler on the Sea-to-Sky Highway with killer views of Howe Sound’s fjords, then another 30 minutes to Pemberton.

In fall, cast for trout—namely rainbow, bull, and cutthroat—plus Dolly Varden char and whitefish. Pemberton’s technical Birkenhead River is one of southern BC’s best for trout, but be sure to check the regulations beforehand. Stop en route to talk flies at Spud Valley Sporting Goods. If you want to just hop in the car and head out, Trout Country supplies all the gear and leads private groups on excursions lasting from a few hours to a few days to Pemberton, Whistler, Squamish, and Vancouver. 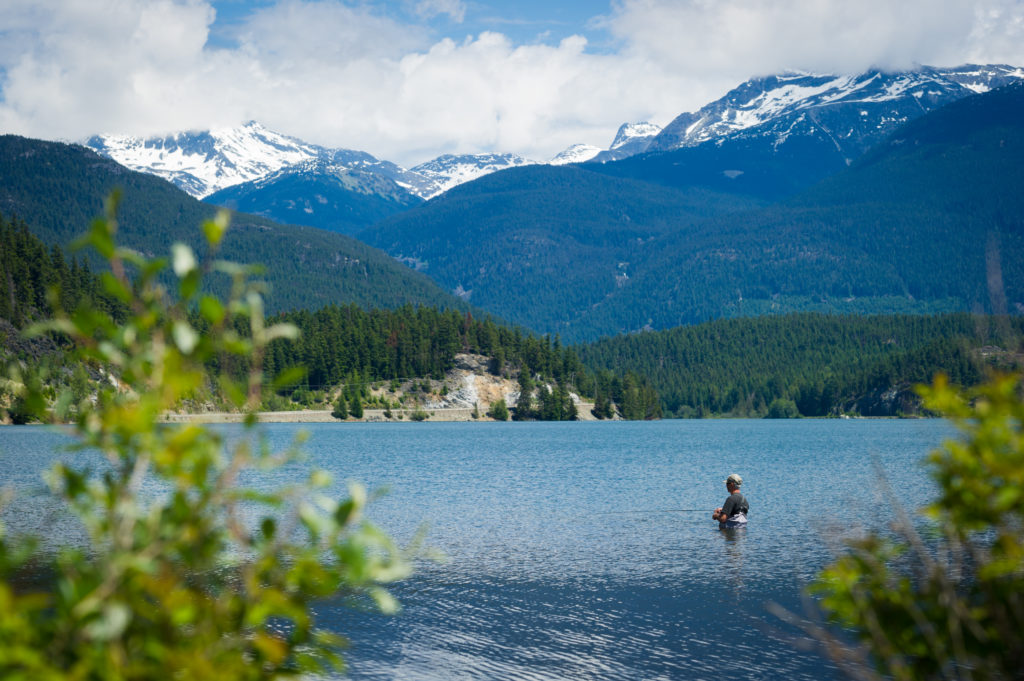 From the easy-access Whistler resort area, head to the famed Squamish River. This is among BC’s top wild steelhead rivers, and the closest to a major urban area—wilderness right near the city. Depending on timing, you can also catch chinook, coho, pink, and chum salmon from July to November.

In the Winter months you can catch Bull Trout, a wild species native to the Pacific Northwest. Catch up with Valley Fishing Guides or Chromer Sport Fishing to book a guided trip at any time of year.

About halfway to Whistler near Squamish, the Upper Cheakamus is where beginners can cast for plentiful rainbow trout in summer and early fall, as well as bear-watch. On the Lower Cheakamus near Brackendale Eagles Provincial Park, go for 20-lb-plus (9-kg) aggressive steelhead in February and March.

You can also angle right near Whistler Village in summer at Alta Lake or by wading in or taking a boat out on pretty Green Lake, which has catch-and-release rainbow and Dolly Varden in its emerald waters. 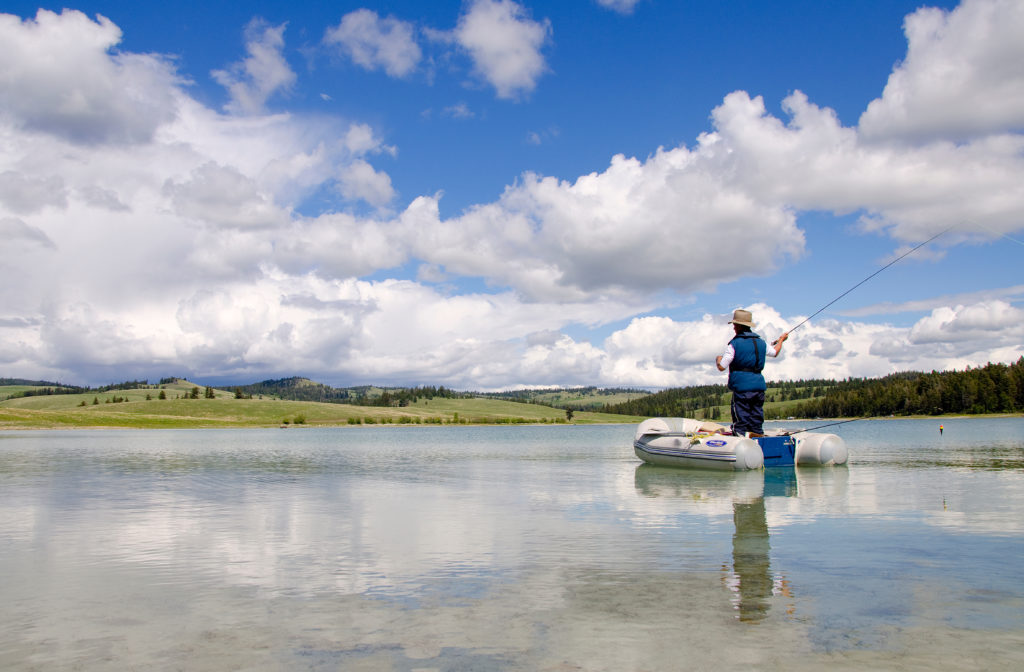 For a classic inland lake experience in autumn, drive about three hours from Vancouver to the golden grassland of Merritt, near the Okanagan Valley’s sunbaked wine country. Long-time standby Douglas Lake Ranch has 12 still-water fly-fishing lakes on Canada’s largest working cattle ranch stocked with hard-fighting trophy triploid rainbow. Other great options—best in spring and fall—are friendly guest ranch 7 Half Diamond Ranch, recent host of the North American fly fishing championship, and Tunkwa Lake near Kamloops—both with vigorous Kamloops rainbow trout up to 10 lbs (4.5 kg). Camp in the provincial park or stay in the rustic cabins of Tunkwa Lake Resort. En route, make a pit stop to fish on the gin-clear Skagit River south of Hope—a gorgeous high-mountain river that is easy to access and holds rainbow and bull trout willing to rise for a well-placed fly. 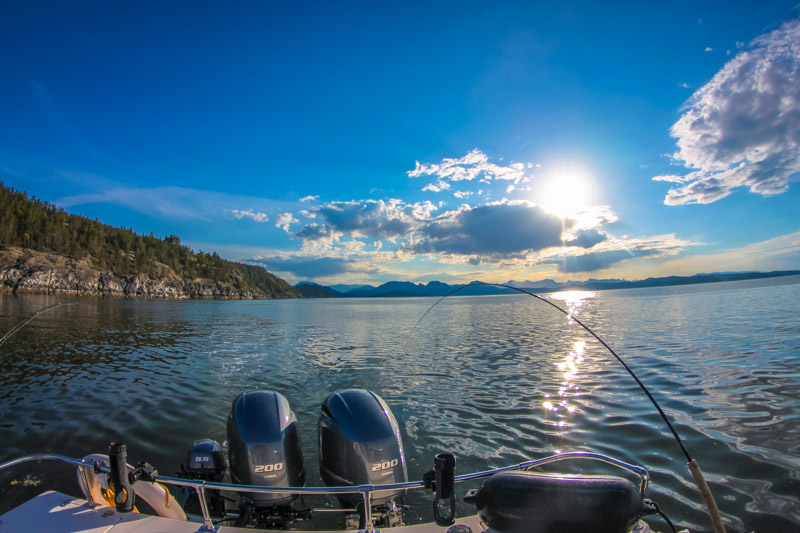 It’s only 1-1/2 hours by ferry from West Vancouver to Vancouver Island, your destination for world-renowned saltwater fishing. First, there’s Campbell River, nicknamed the Salmon Capital of the World because of its exceptional fishing for all five species passing through one narrow place: chinook (year-round); pink, sockeye, coho (June to September); and chum (September and October). Also a hit: the calm waters, making for a comfortable day on the ocean.

The pros at Coastal Wilderness Adventures like the area south of Quadra Island in winter and spring; then in mid-summer and fall, north of Campbell River. Instead of skiing, go out with Coastal to take in the snow-capped mountains and crisp air, drop in a prawn trap, and try for feeder chinook from December to April.

A close second for the salmon capital title is Port Alberni at the west coast’s narrow fjord-flanked inlet, where you can hook returning sockeye and chinook headed for their birthplace. 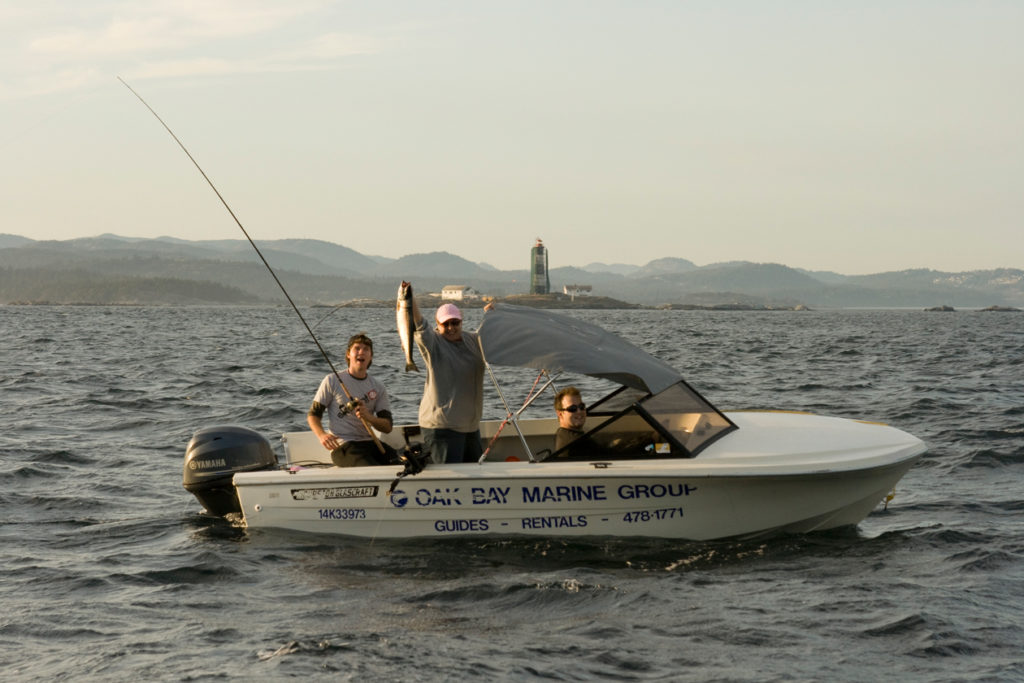 Also on Vancouver Island, the BC capital of Victoria is a green, walkable, flower-filled town. Venture out on a charter leaving from the downtown habour to reel in halibut and salmon, particularly good around the southern Gulf Islands. You could spot whales in the water or wildlife onshore.

Sooke, a picturesque coastal community on the island’s southwestern tip, and its Swiftsure Bank are teeming with wildlife at the mouth of Juan de Fuca Strait: seals, sea lions, orcas, humpbacks, and sea birds. For the angler, there’s rockfish, halibut, and salmon concentrated around the tidal area. Take a charter or go out with a lodge operator around the Strait.

If you like the idea of combining a tour of the big city with a day of fishing, depart from Vancouver in pursuit of Pacific salmon. Take a guided Bon Chovy Fishing Charters sport fishing boat from downtown’s Granville Island year round—but especially in August and September—or from West Vancouver’s Horseshoe Bay for five- to 10-hour outings. Bon Chovy’s Gulf Island package, for example, travels to nearby Bowen or Gabriola islands for salmon and bottom fishing, plus seasonal spot-prawn traps.

Here’s where to find more top BC fishing destinations; don’t forget to secure a fishing licence before you go. See BC Sport Fishing Guide for info.