Whether you prefer bike riding, rollerblading, jogging or walking, Greater Victoria’s Galloping Goose and Lochside Regional Trails are an excellent option for enjoying the great outdoors. This well maintained network of trails, which is part of the Trans-Canada Trail system, extends from Swartz Bay at the top of the Saanich Peninsula just north of Sidney through downtown Victoria and then east out to Sooke, together covering 88 kilometres (54.6 miles), mostly running through beautiful west coast scenery. 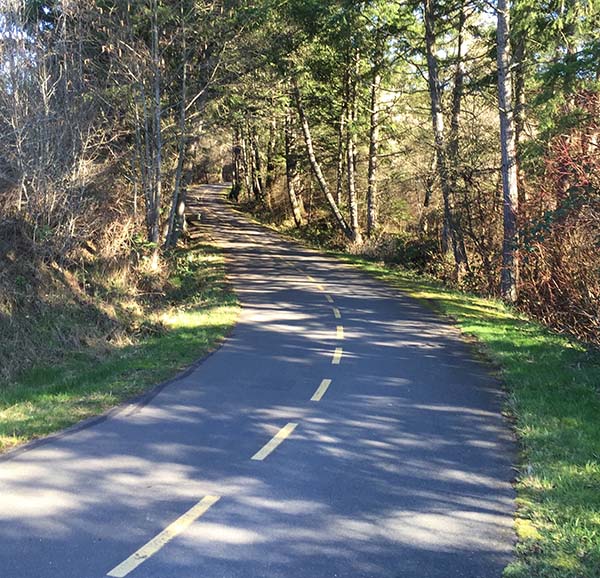 Both trails were built along former railway lines, which means they are generally flat with only slight inclines, except for occasional hills and valleys where bridges once stood. Most parts are accessible for wheelchair users as well, and sections of the Lochside Trail are also used by horseback riders. 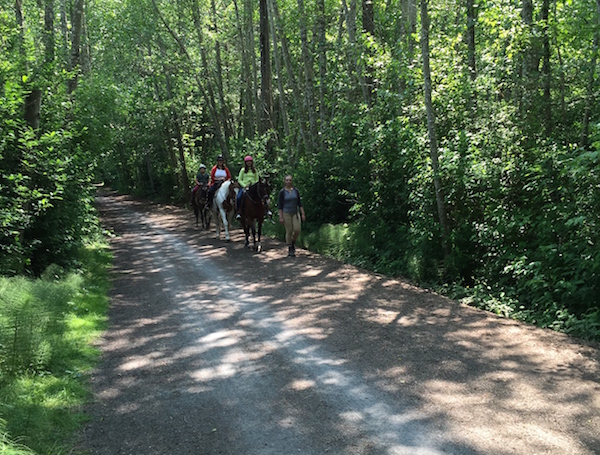 First to open in 1987 was the Galloping Goose, named for an unusual gasoline-powered railway car that once carried mail and up to 30 passengers between Sooke and Victoria twice daily during the 1920s. The Goose runs from the Johnson Street Bridge in downtown Victoria 55 kilometres (34.2 miles) out to Sooke. 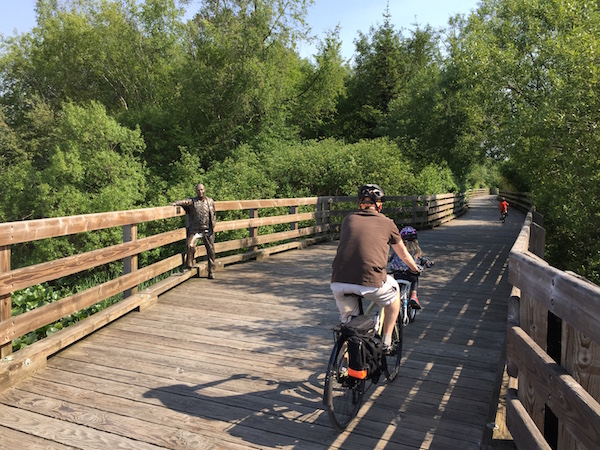 A trestle bridge on the Lochside Regional Trail with a statue of prominent local farmer Roy Hawes. Photo: Joe Wiebe

The central paved section of the Galloping Goose is wide enough for two lanes of bicycle traffic; it’s generally easy to pass pedestrians except at peak commuting hours when there are a lot more people on the trail. There are occasional street crossings to navigate, as well as a few wooden trestle bridges here and there—while they do generate a rather bumpy ride, they also offer some excellent vantage points for sightseeing. 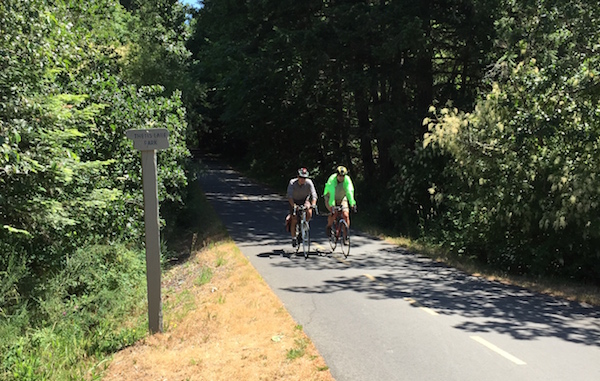 Heading west, the Goose roughly follows the Trans-Canada Highway as far as Thetis Lake Regional Park, and then continues as a gravel path through Colwood, Langford and Metchosin, running past Royal Roads University and Glen Lake. A short side trip here is Fort Rodd Hill National Historic Site, which offers overnight accommodation for those interested in cycling the entire trail system over two days. This part of the trail is slightly rougher, though the gravel is fine and well packed so it is still fine for riding. 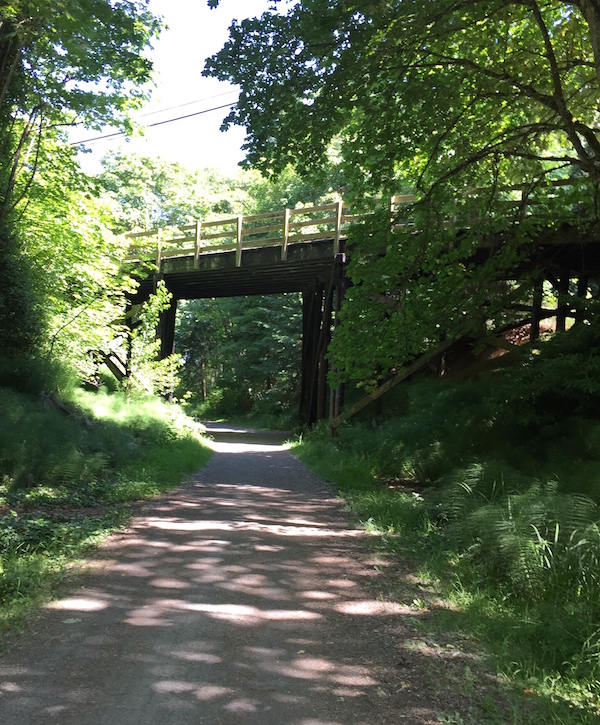 Continuing towards Sooke, the Goose passes near Witty’s Lagoon Regional Park and then runs through Matheson Lake and Roche Cove Regional Parks.East Sooke Regional Park is also nearby. The trail hugs the north shore of the Sooke Basin and then heads north along the Sooke River to Sooke Potholes Provincial Park before terminating near an abandoned mining town called Leechtown, which is not accessible as it is on private property beyond the end of the trail. 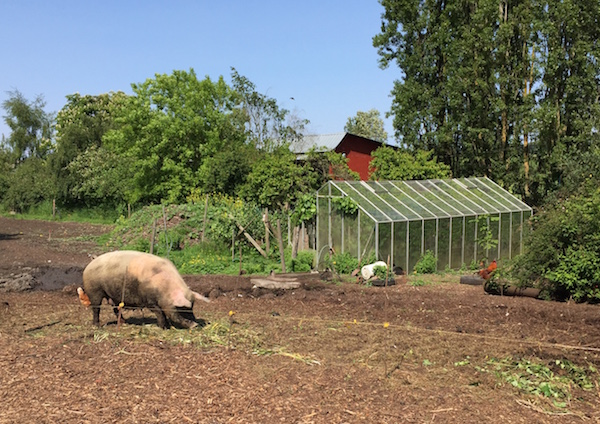 Just one of the many sights you’ll see on the Lochside Regional Trail. Photo: Joe Wiebe

The Lochside Trail, which opened in 2001, stretches 29 kilometres (18 miles) between Victoria and the Swartz Bay ferry terminal. Along the way, it runs past beaches and through farmlands, sometimes sharing roads or laneways with residential or farm traffic. Horseback riders are a fairly common site, too. 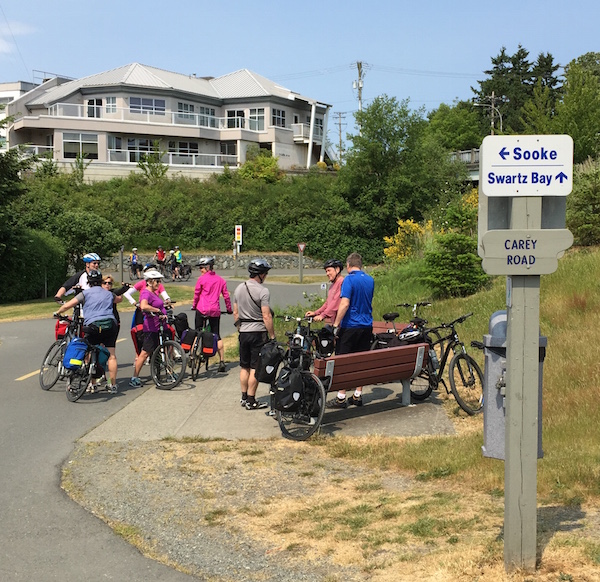 The junction of the Galloping Goose and Lochside Regional Trails. Photo: Joe Wiebe

Starting at the so-called Switch Bridge that arcs over Douglas Street right where it becomes the Trans-Canada Highway, the Lochside Trail runs past the Swan Lake Nature Sanctuary and Blenkinsop Lake, with an optional turn-off for Mount Douglas Park, and then heads straight north all the way to Swartz Bay. Another easy side trip at about the halfway point is to Island View Beach (with camping options), and there are also numerous opportunities to break for snacks, ice cream, or even craft beer, thanks to the recently opened Category 12 Brewing, just across the Pat Bay Highway on Keating Cross Rd (although I’ll warn you there is a steep hill to climb on the way to the brewery). 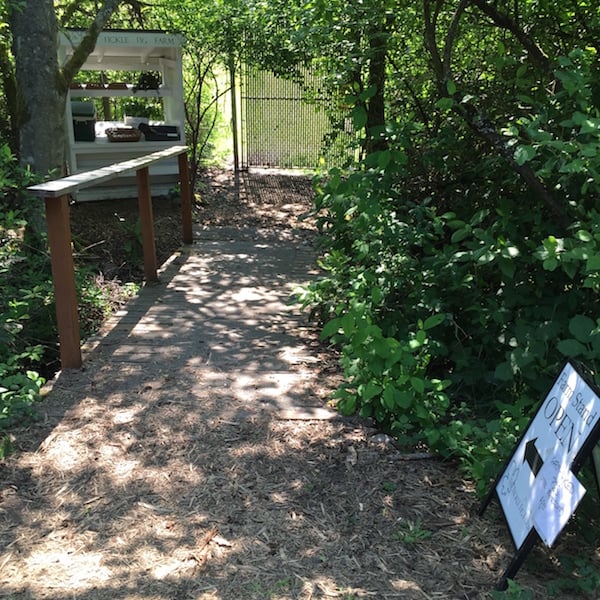 Whether your preference is a day trip to Sooke or Sidney, or a more casual hour-long ride or walk, the Galloping Goose and Lochside Regional Trails offer something for everyone.