Every BC ski resort has its own secrets and surprises. Even the locals may not know them all. Here’s an insider’s guide to make the most of your next BC ski trip. 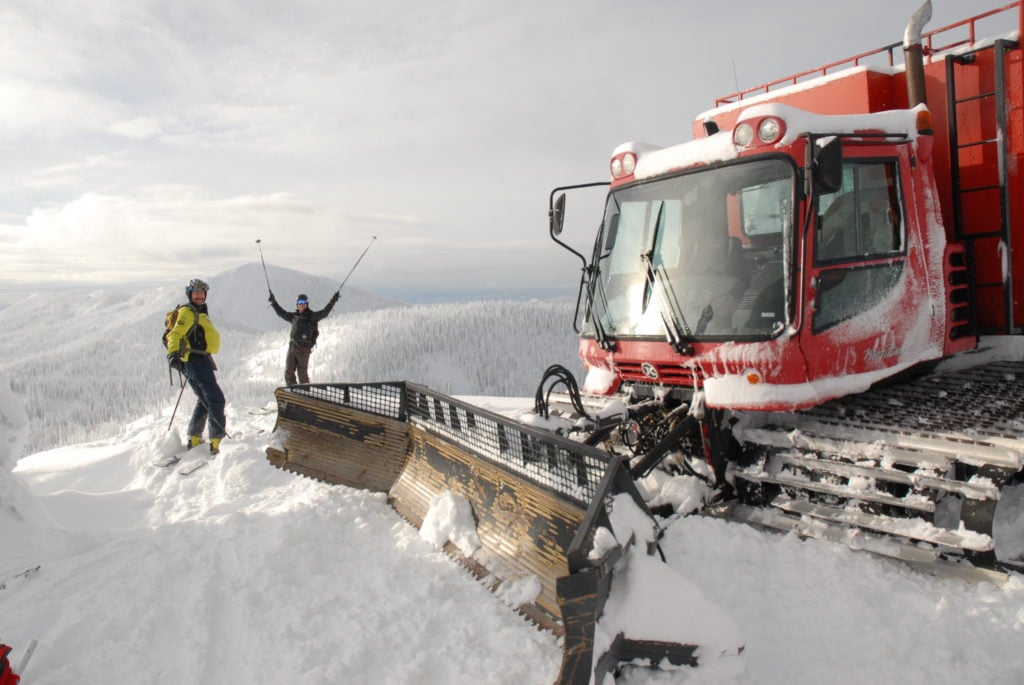 It’s a few quick turns from the top of the Grey Mountain Chairlift at RED Mountain Resort to the Mt. Kirkup Cat Skiing pickup spot. You could ski right past the sign among the trees if you weren’t paying attention. If you’re lucky enough to spot it, toss the driver a cool $10 and jump in. Listen to the instructions carefully and study the trail map as you creep along the snowcat trail to the slopes of Mt. Kirkup. Pick your line—open runs or tree skiing on advanced terrain—and float on untracked powder back to the lifts. The cat operates from 10 a.m. – 2 p.m. daily (conditions permitting), so keep your eye on the “Open” and “Closed” signs at each chairlift. You won’t want to miss your chance. 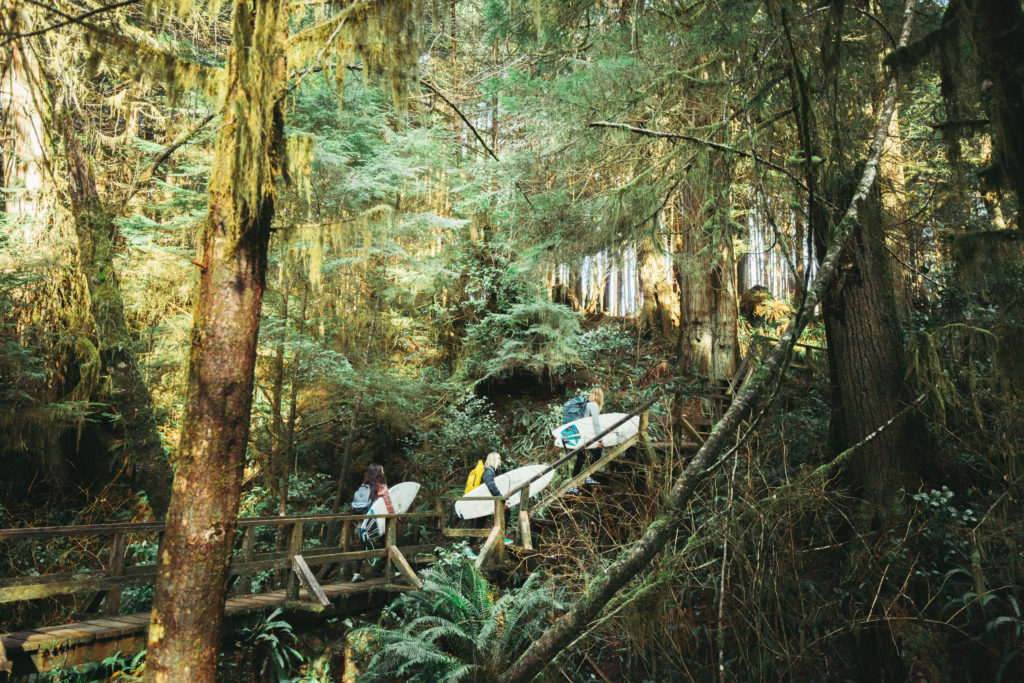 Walking the trail to Schooner Cove in Tofino. Photo: @nathanielatakora via Instagram

There aren’t many places in North America where you can ski on a mountain while taking in views of the ocean. There are fewer still where you can ski in the morning and surf in the afternoon. On Vancouver Island, you can do it all. Grab first tracks, then head to Tofino and learn to surf Chesterman Beach or tackle the swell at Long Beach. If a marathon day sounds a little much, Mount Washington has ski-to-surf packages. For lovers of both swell and snow, Vancouver Island is paradise.

3. BC is the birthplace of heli-skiing. Translation: It’s the place to do it. 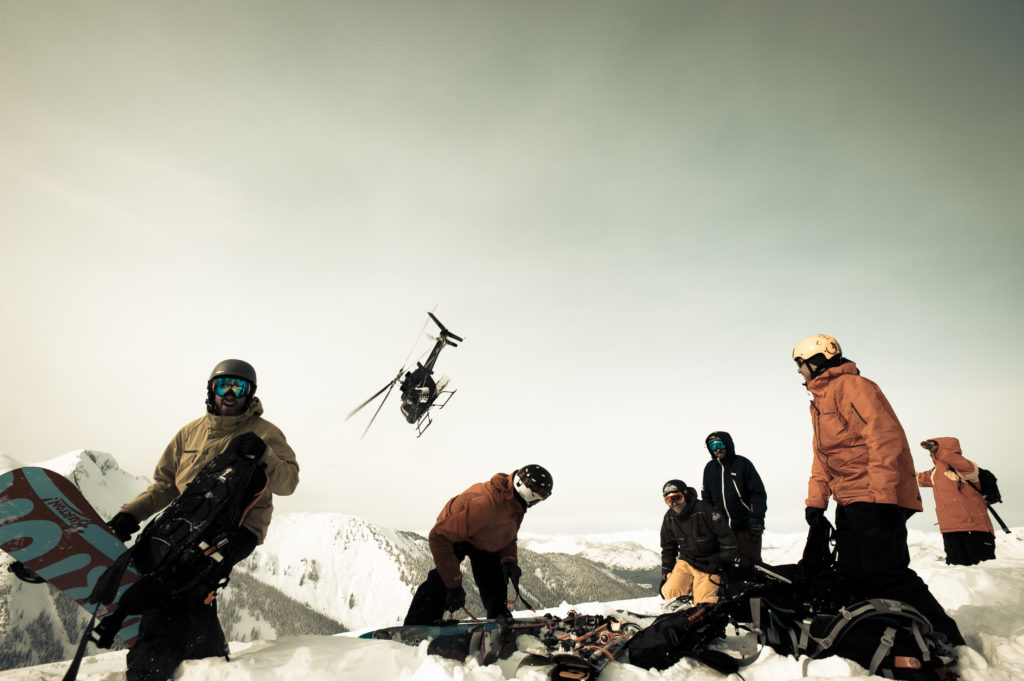 Heli-skiing in BC. Photo: Reuben Krabbe

Over 50 years ago, Hans Gmoser—legendary climber, mountain guide, and backcountry skier—whisked a few intrepid skiers into the Bugaboo Mountains by helicopter. Soon after, the first commercial heli-ski operation in the world was up and running. Now, BC is home to dozens of heli-ski operations, with terrain that stretches from the far corners of Northern BC, to the rugged Coast Mountains, and into the Canadian Rockies. Choose from one-day boutique operations to week-long adrenaline getaways. Why not give it a go where it all began? 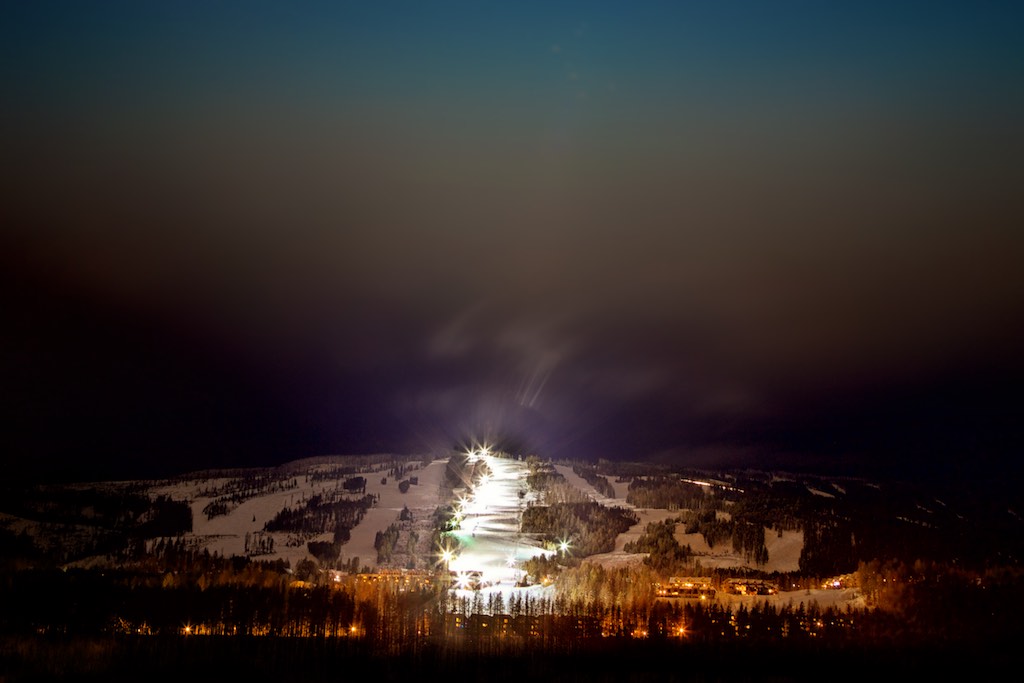 If you prefer to ski under a canopy of stars, a trip to BC’s Purcell Mountains should be on your list. Ride up Kimberley Alpine Resort‘s North Star Express and ski down the longest night-skiing run on the continent, a winding 2.5 kilometres (1.5 miles). SilverStar, Panorama, Big White, and Mount Washington offer night skiing, too. 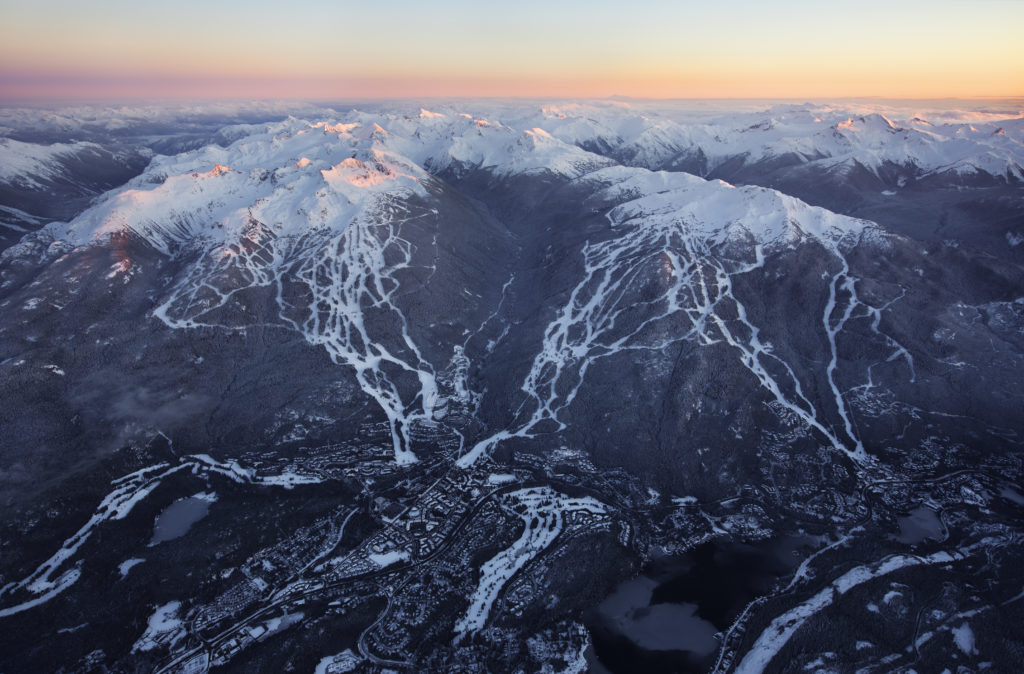 This one might not be a secret but it’s certainly worth a mention. A short, scenic 125-kilometre (78-mile) drive from Vancouver, Whistler Blackcomb spans two mountains, connected by the record-breaking PEAK 2 PEAK Gondola, with more than 200 marked runs, 16 alpine bowls, and three glaciers. The largest ski terrain in North America lures skiers from all over the world, while glamorous après and endless off-mountain activities help make the vacation unforgettable.

6. BC has a Powder Highway. Time to hit the road. 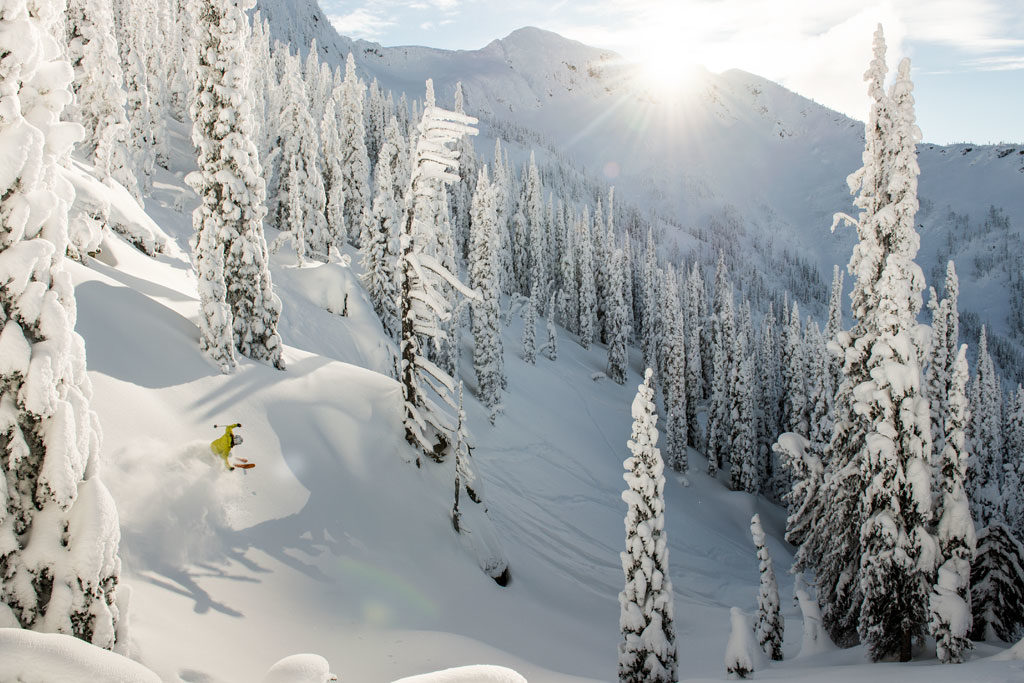 The ultimate ski road trip is found in BC’s southeastern corner. This powder-seekers loop travels through the Kootenays and deep into the heart of the Rocky, Purcell, and Monashee mountains. Eight lift-service alpine resorts, two dozen cat-ski and heli-ski operations, and backcountry lodges punctuate the landscape. Ski them all, or choose just a few—BC’s Powder Highway will not disappoint. 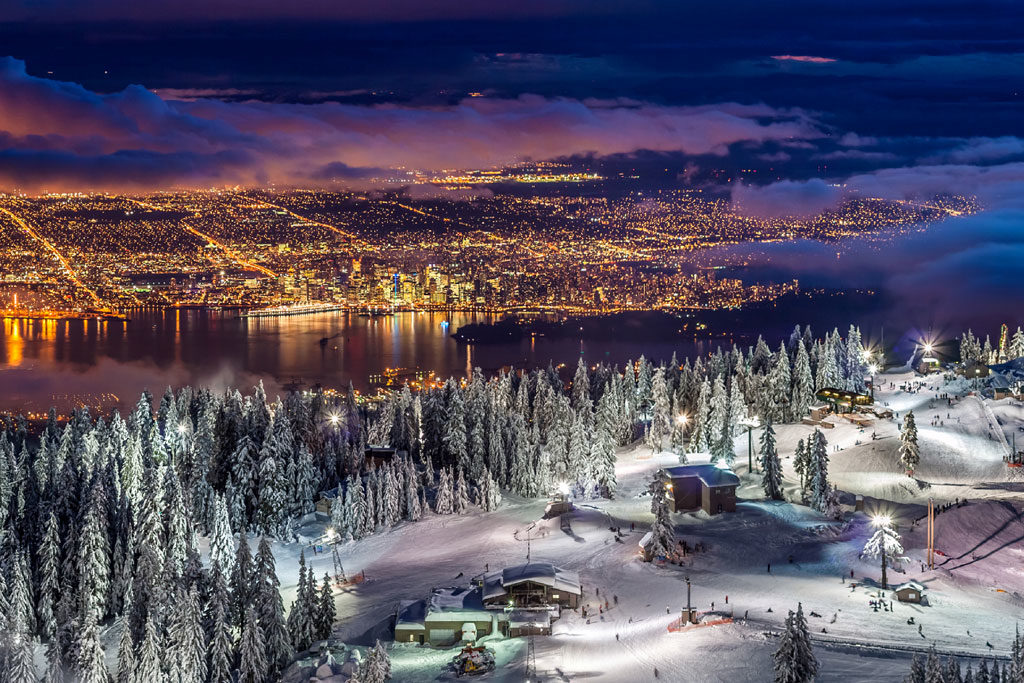 Where else in North America can you ski on three different mountains while gazing down upon a major metropolis? By travelling less than 30 minutes from downtown Vancouver, you can ski at Cypress Mountain, Grouse Mountain, or Mt Seymour before heading back into the city for an evening on the town. Glide down perfectly groomed night-skiing runs while the city lights twinkle below.

8. Burn your thighs down the longest lift-serviced vertical in North America. 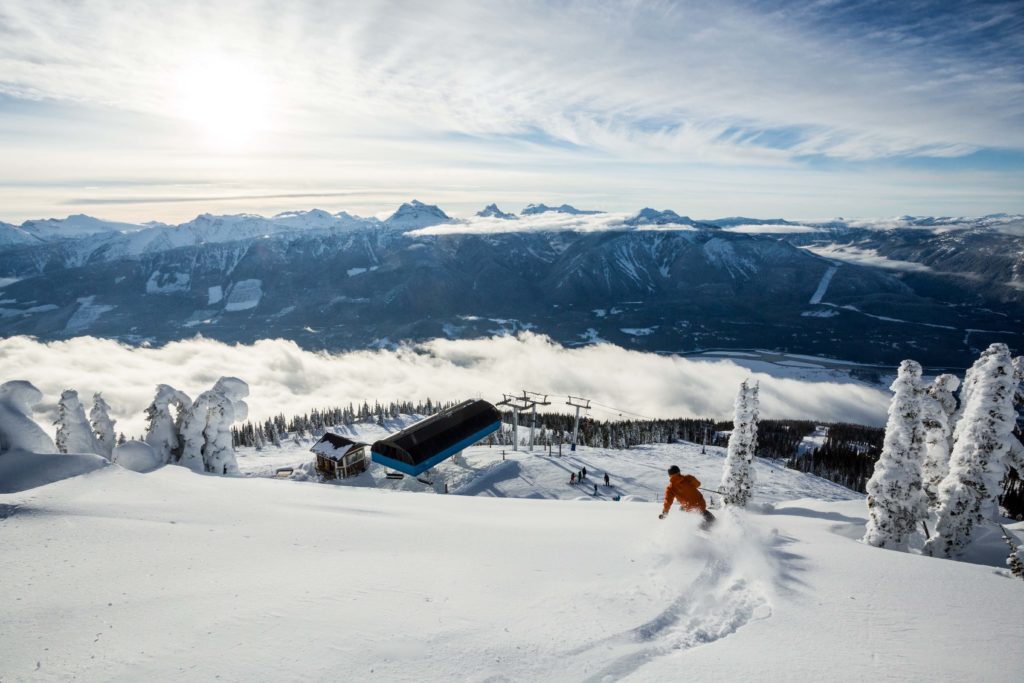 Canada’s newest ski destination, Revelstoke Mountain Resort, gives skiers and snowboarders access to the continent’s longest lift-serviced vertical at 1,712 metres (5,620 feet). The best part? The village base is only 512 metres (1,680 feet) above sea level, which means you won’t be short of breath plowing through the nine to 13 metres (30 to 45 feet) of powder the resort sees on average each season. Lap the alpine before ending the day with a slow, easy cruise down The Last Spike, a 15.2-kilometre (9.5-mile) green run that winds its way to the village base.

9. Ski past snow ghosts and climb an ice tower. 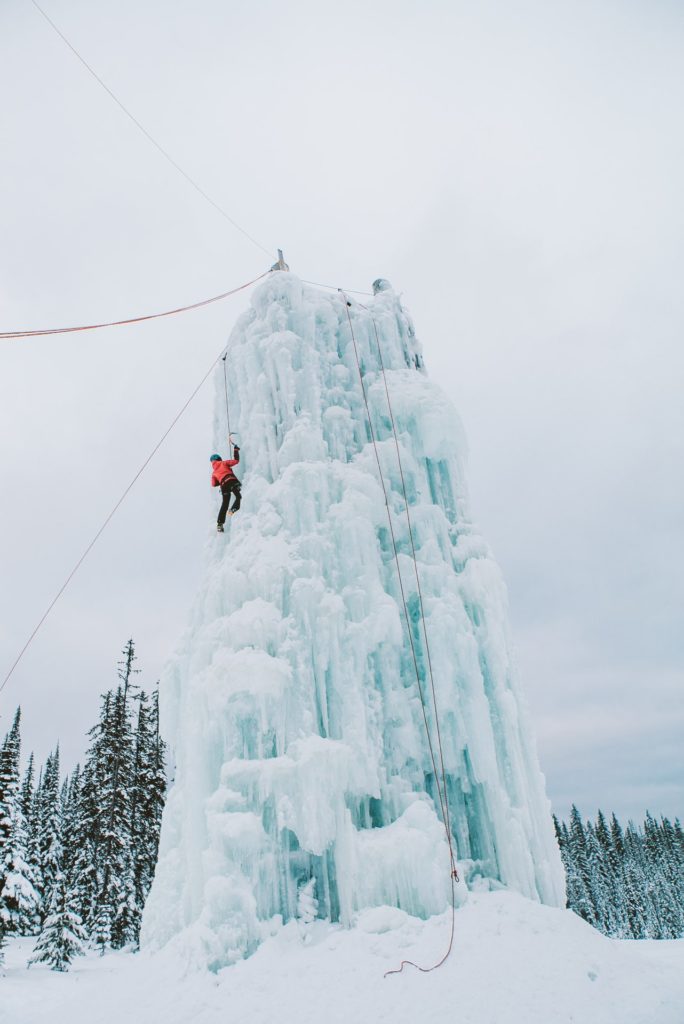 Snow ghosts and a frozen tower of ice may sound like the winter wonderland of a fantasy film, but it’s the everyday reality at Big White Ski Resort. Skiing through ice- and snow-encrusted pine trees is an otherworldly experience; when the sun shines, the sparkle of snow crystals will make you feel a little dreamy. If you still have some gusto at day’s end, head to the Happy Valley Adventure Park and tackle the 60-metre (197-foot) Ice Climbing Tower. Trained staff help determine and guide routes for everyone from beginners to advanced ice pickers. Forget Disneyland—dreams come true at Big White. 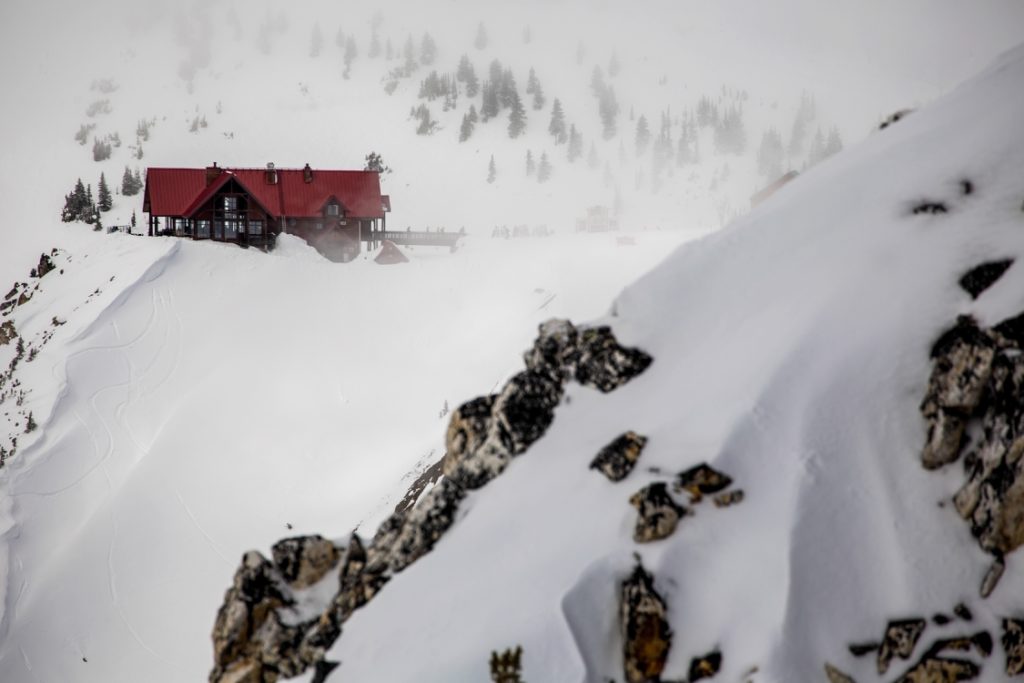 Sip a cold one while scoping your lines for the next day at a cosy mountain lodge 7,700 feet (2,346 metres) above sea level. The views from Eagle’s Eye Restaurant at Kicking Horse Mountain Resort are some of the best in BC. A meal, or just an après, at Canada’s highest-elevated restaurant is a must-do. You don’t even need to come down: you can book a stay in the Eagle’s Eye Suites. That means guaranteed first tracks from your own private mountain-top retreat.

Check Out the “Cat Ski Capital of the World”

In the area surrounding Nelson, five cat-skiing companies operate on over 32,000 hectares (80,000 acres) of terrain, creating one giant cat-skiing mecca.

Ski Right Through an Alpine Village

The ski-in, ski-out accommodation at Sun Peaks Resort goes one step further. The resort’s modern village is a ski-through affair. You can ski right up to your hotel, local coffee shop, or dinner reservation.

Glide Along an Ice Trail

Lace up your skates and glide along Apex Mountain Resort’s one-kilometre (0.6 mile) skating loop. Warm up beside the bonfire between glides or head to the NHL-sized outdoor rink for a game of pick-up hockey.

Ski season is right around the corner. Check out this BC ski map to start planning your trip and save when you book early with these ski offers at BC resorts.