When I received an invitation to join some girlfriends for an overnight hike in Strathcona Provincial Park, I was a bit intimidated. I enjoy hiking but can’t profess to being as passionate about it as some of the people in my life– my mom’s favourite place to be is in the mountains and my friends will dehydrate a week’s worth of meals and head off into the backcountry. I fretted over how much food to bring (and in the end brought way too much), whether or not my gear would be sufficient and wondered if I could keep up with the regular hikers. Even the soggy forecast seemed daunting. I was told not to worry– we would, after all, be in the backcountry for just one night. 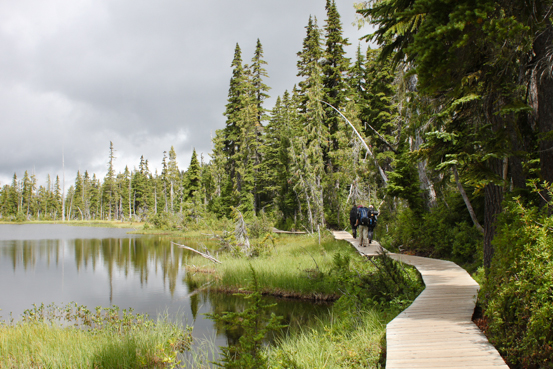 Our destination was Mount Albert Edward in Strathcona Provincial Park, a large park overlapping with Mount Washington Alpine Resort, that has the distinction of being the oldest provincial park in British Columbia. We hoped to summit Mount Albert Edward, the sixth highest mountain on Vancouver Island, and planned to spend the night at the campground at Circlet Lake, hiking a total of 31km. 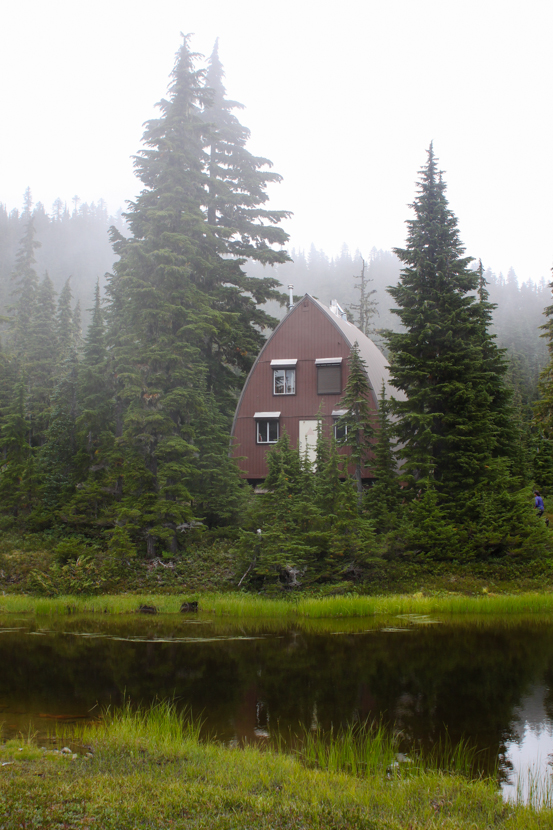 After we had registered and paid our backcountry camping fees (easy to do online!), we set off, seven women with backpacks carefully packed and lined with plastic bags in case the ominous forecast came true. The start of the hike was an easy stroll along scenic wooden boardwalks through the marshy environment of Paradise Meadows. This area is also quite accessible– we saw several families with strollers on the Centennial Trail portion.

As the trail became steeper, I realised my initial fears about my fitness levels were unfounded. Hiking with a group of friends meant that a non-stop stream of conversation distracted us from the more challenging sections but also helped deter any bears that might be wandering nearby.

The trail climbed into the forest, where cedars and firs towered above us and splashing creeks from the week’s wet weather cut across the trail. The trail was well maintained and climbed steadily until the trees broke into vibrant green meadows and we passed rows and rows of dwarf blueberry bushes bursting with ripe fruit. 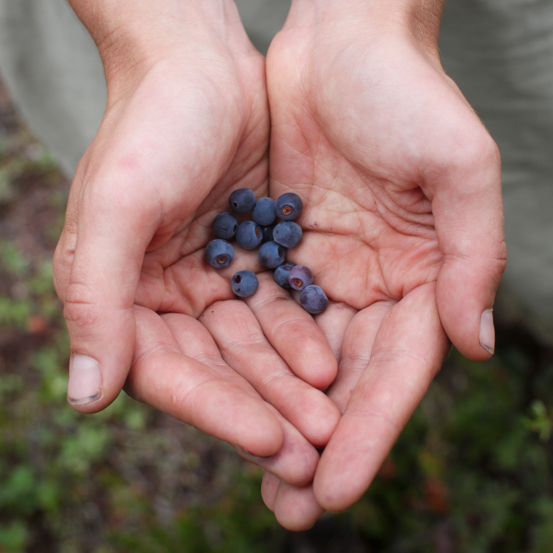 The hike into our campsite at Circlet Lake breezed by (though not without much sweating) and soon we were setting up camp. The site comes equipped with wooden platforms, a pit toilet and bear cache lockers. There’s a frigid cold lake for bathing too, if you’re as brave as a few of my friends (I declined the icy plunge). 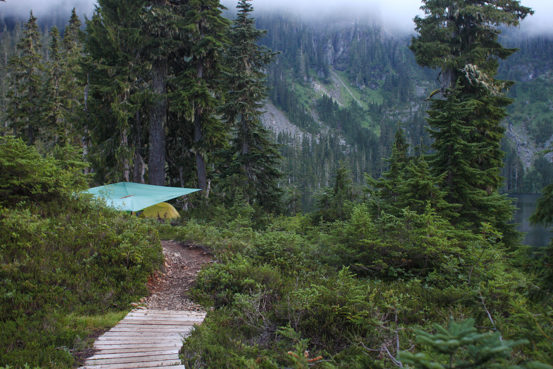 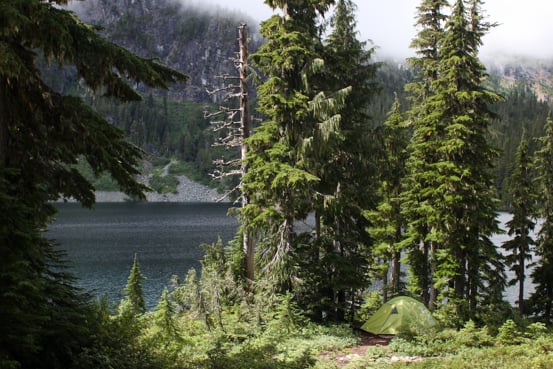 With a few girls opting to stay at the campsite to read and nap, the rest of us continued on to Mount Albert Edward. While much of the trail to Circlet Lake can be described as “rolling”, the way to Mount Albert Edward was much steeper and more challenging. However, as we climbed, the reward for our efforts could be enjoyed: beyond the flat expanse of the Forbidden Plateau, the ocean could be seen glimmering in the distance. 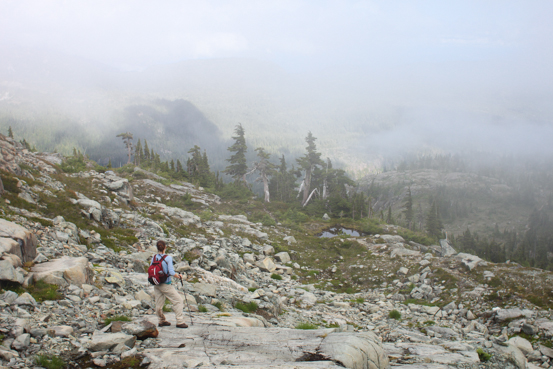 Our surroundings became the scrubby bushes and scrappy trees of the alpine, still ponds dotting an increasingly rocky landscape. We reached a ridge and bright, thin clouds began moving over and around us, sweeping over the ridge and down into the valley obscured by fog.

At this point we had to make a decision on whether we wanted to continue hiking. The rest of the trail was marked by cairns, with no distinct path, and if thick fog suddenly obscured the next cairn, it would be easy to wander into danger. To me the clouds seemed innocuous, but to my more experienced friends, it was an important reminder that when in the backcountry, always be aware of your surroundings and prepare for all weather.

Luckily, the clouds began clearing and we were able to move on. With their quick departure, the looming figure of Mount Albert Edward could suddenly be seen across the valley. It seemed relatively close but after chatting with a family returning from the summit, we determined we wouldn’t have enough time to summit and make it back to Circlet Lake before dark. We continued on for a while, until we hit a shale scramble and decided the rest of our time was better spent having a snack and admiring the view. 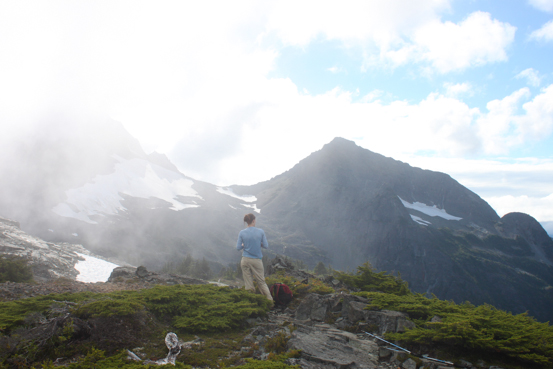 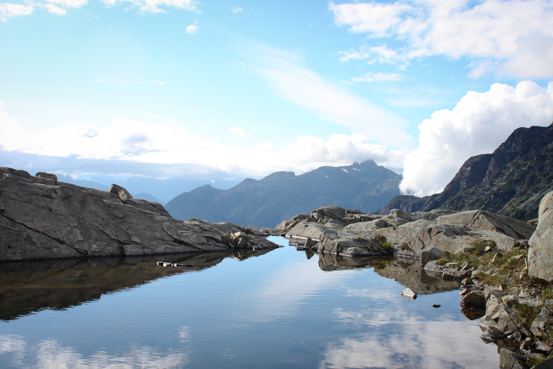 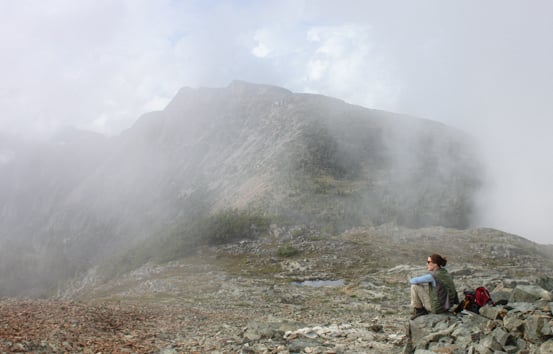 One friend had wandered up the shale while we rested and came running back down.

“Come this way! You have to see this!” She cried and we jumped up and ran after her, following her down the side of the mountain that faced the valley. To our left, a glacier came into view, clinging to the rocky cliffs, its blue ice gleaming in patches of sun that burst through the blustering clouds. 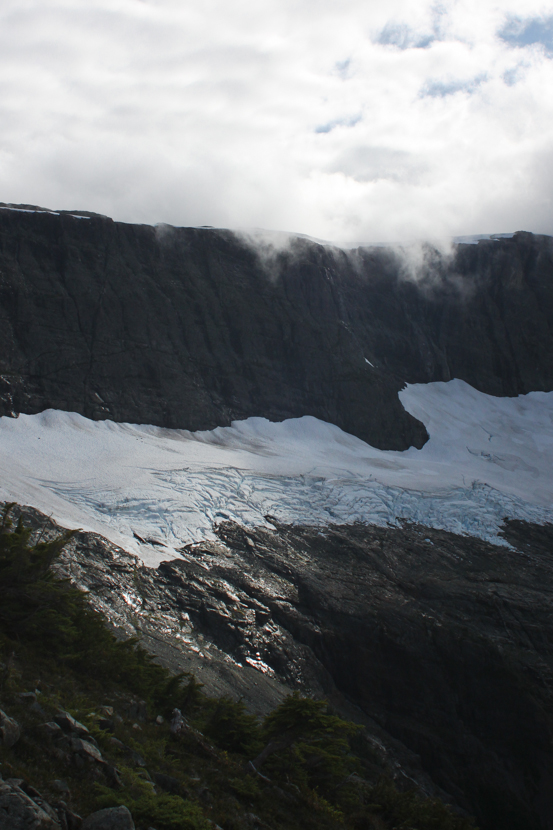 On the hike back to camp we were treated to a Ptarmigan and her chicks, chirping and running around an alpine pond. Back at camp we enjoyed a dinner of rehydrated vermicelli and tofu, in addition to seven different kinds of chocolate, one for each hiker. We marveled at the dry weather and crossed our fingers that the morning would be the same. 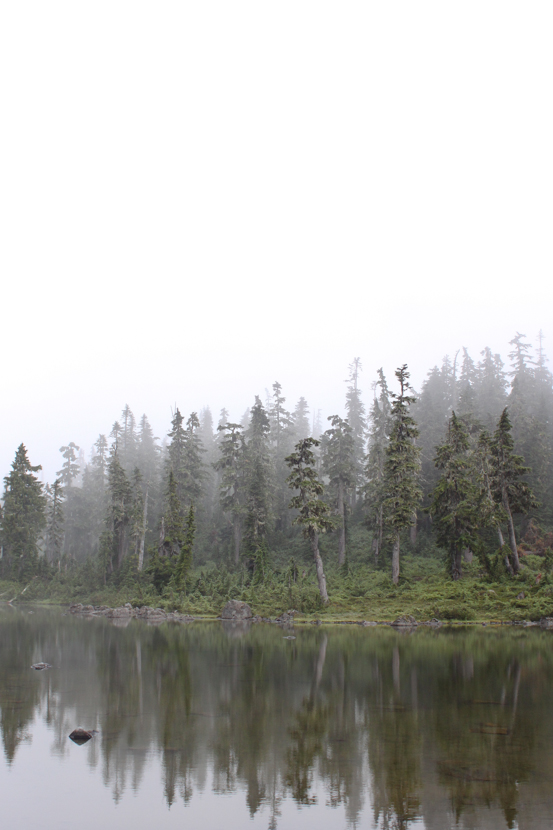 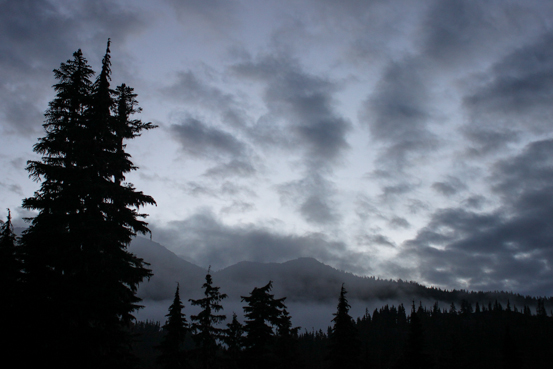 The morning dawned foggy but mercifully without rain. The hike out was through an eerily beautiful landscape of misty forest, everything still and cool, descending back into the woods and finally meeting up with the families strolling the wooden boardwalks in Paradise Meadows, our muddy boots and big packs a funny contrast.

The hike to Circlet Lake can be done as a long but moderately challenging day trip, but hikers going on to the more difficult Mount Albert Edward trail generally camp overnight at Circlet Lake. Remember to be prepared for all kinds of weather! 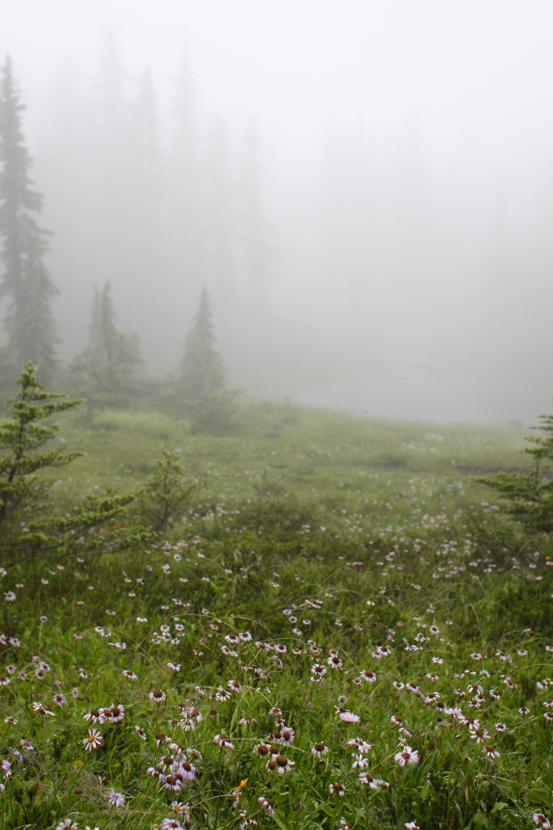 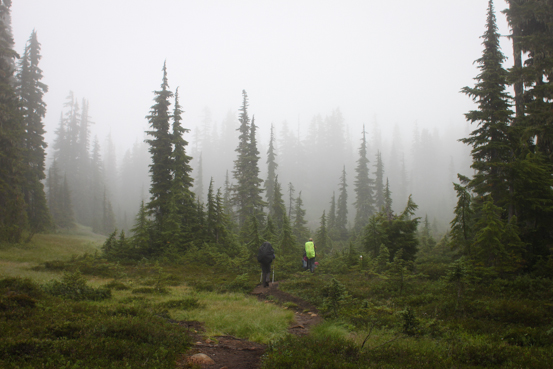