From the middle of the Harrison River, I can see dozens of bald eagles perched in the trees lining the shore. Wait….there must be hundreds. I count seven eagles on one tree alone. Staggered at all heights, still and silent, their white heads stand out from the dark green foliage like Christmas-tree ornaments.

Down on the flats, it’s like a kitchen party for birds, with not just eagles but Mallard ducks, green winged teal, and trumpeter swans all convening for dinner. My fellow birdwatchers adjust their binoculars and telephoto lenses. On this crisp, gloriously sunny November day, we’re all here to witness an annual rite of nature: the largest gathering of wintering eagles in the world. 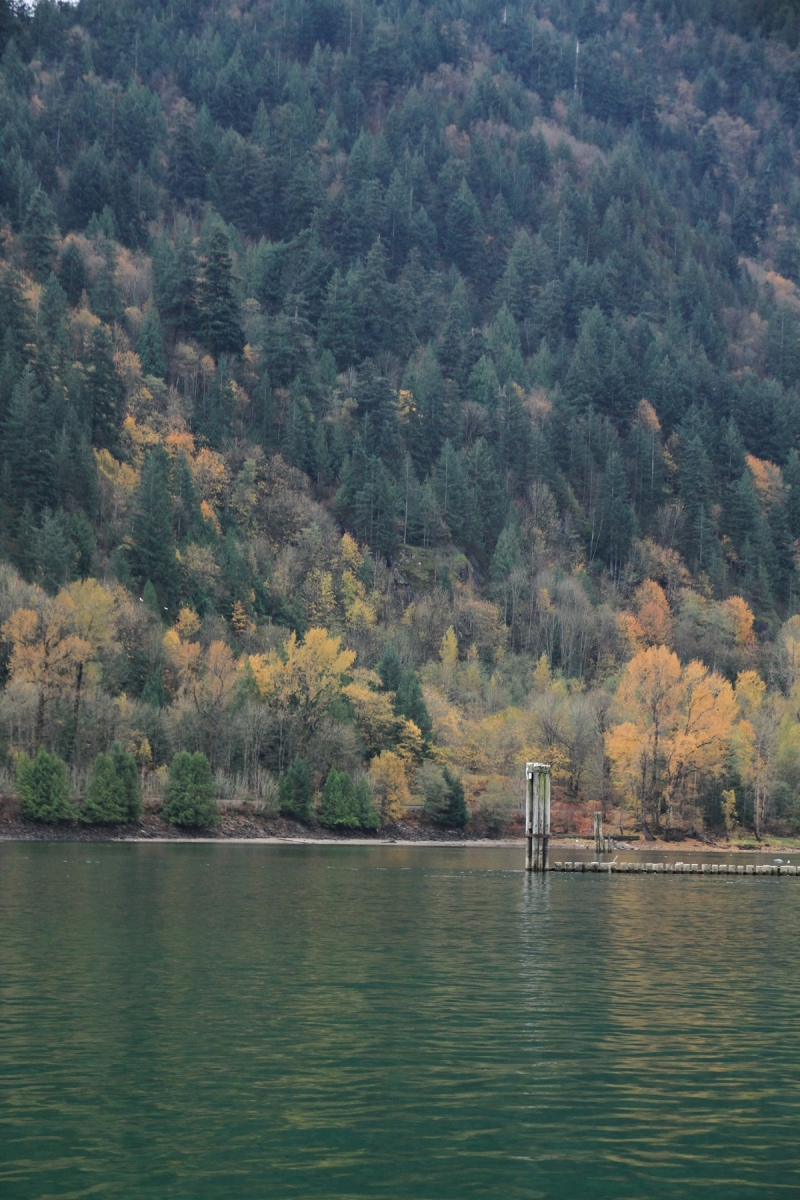 “Yesterday’s count was 3,227,” says David Hancock, a biologist and conservationist who has been studying bald eagles for years. “The peak time for eagles is about the middle of December. If the weather holds well there could be 12,000 to 15,000 at one time in this area. It’s quite a spectacle.”

These eagles have come a long way. They’ve flown south some 1,600 to 2,400 kilometres (1,000 to 1,500 miles) to British Columbia’s Fraser Valley from the more northern parts of the province, Alaska, and the Yukon. As their food supply freezes towards winter, they travel south to BC’s temperate Fraser Valley. Here, where the Fraser and Harrison Rivers meet, all five species of salmon spawn. That means the eagles can feast on the salmon that have returned to their home stream to spawn and die right through January.

From my window seat on the jetboat, I can see the pebbly bottom of the river; we’re skimming over only about four feet (1.2 metres) of water. The shallows of the Chehalis Flats offer the eagles an all-you-can eat buffet. A fish leaps off the water at eye level, startling me with a flash of silver.

“We have the world’s greatest number of eagles here for one reason,” says Hancock. “The air and the water that’s coming down that river is good and pure. And that produces the most productive salmon river in all of Canada.” 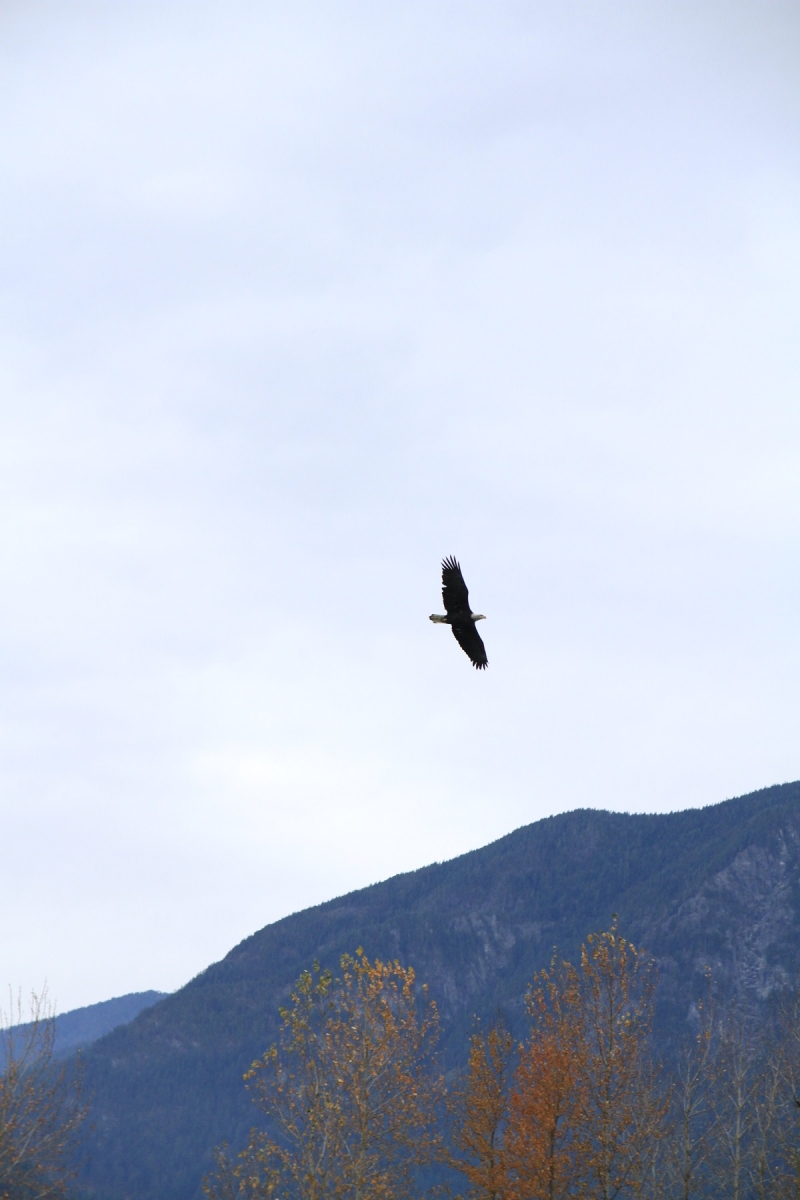 “We have the world’s greatest number of eagles here for one reason,” says Hancock.

“The air and the water that’s coming down that river is good and pure. And that produces the most productive salmon river in all of Canada.”

Fraser River Safari’s jetboat tour is one way to get a good view of the eagles, and during the Fraser Valley Bald Eagle Festival, Hancock is onboard as a guest lecturer. He also joins tours to lecture on demand.

The two-day event takes place in the tiny town of Harrison Mills every year. It’s a gorgeous location that’s just a 90-minute drive from Vancouver and a 180-degree change of pace. There’s something calming, even reassuring, about the sense of space out here.

Coming in for a landing | K. Kitsch

I took my time getting here, driving along the Fraser River on the Lougheed Highway 7, which deserves its Scenic 7 nickname. From the town of Mission, which is about 20 minutes from the Sumas, Washington State border crossing, it winds through countryside punctuated by bright red barns and white, snowy peaks.

But this weekend, the eagles are the main attraction. Between the nature tours, exhibits, and lectures, it’s easy to understand why people are so fascinated by these raptors.

“Eagles were an endangered species and they’ve made a huge comeback,” notes Ron Skogland, who has been volunteering for the festival for 15 years. “It used to be very, very difficult to see them.”

Skogland helps visitors see the majestic birds in greater detail. Under a tent along the Harrison River, he focuses on the birds on the flats through high-powered telescopes.

I lean over and peer through the lens. An eagle’s fluffed white head and fierce yellow beak come into sharp relief. It’s sitting on something, a fish, pecking at the water. It lifts its head and looks around, on high alert.

These are indeed magnificent creatures. I learn that an adult eagle has a wingspan of nearly 2.1 metres; that’s an incredible seven feet. I stretch my arms wide to get a sense of how big they really are. The females weigh 4.5 to 6 kilograms (10 to 14 pounds), about the size of my tomcat. Their sharp talons—one facing backwards, three facing forwards, allow them to catch fish and hold their perch on branches.

At Sandpiper Resort Golf Course, one of the festival’s eagle viewing sites, I see evidence of the eagles on the ground before I even look to the sky. Next to a giant maple leaf that’s fallen from the trees, I spot a lone fish tail encrusted in sand. The scene is startling; it’s literally a fish-out-of-water. There’s only one way it ended up in the forest.

I follow a trail through the Douglas firs to the river, where a gazebo offers a comfortable place to watch the eagles fly. One sails past, and the little girl next to me excitedly follows its path. She stretches her arms wide through her fingertips, tilts her torso, and then spins into flight.

I can’t help but smile. It’s what we all want, really—to fly. These eagles soar on wings as wide as we are high. Yet we most often need binoculars to see them. Watching them makes you realize how big the sky really is. How far these birds have travelled. And how much there is yet to see.

You can find great birdwatching throughout British Columbia.  Learn more about where to see eagles in BC.

With a prime position along the Pacific Flyway, British Columbia is home to hundreds of bird species.

On wildlife tours in British Columbia, you can spot black or grizzly bears, salmon spawning up a river, or eagles, mountain...