Mountain biking and beer—in that order—is a great combination. If you like to pair the two, here’s your go-to BC guide to riding the trails and letting the beer flow. 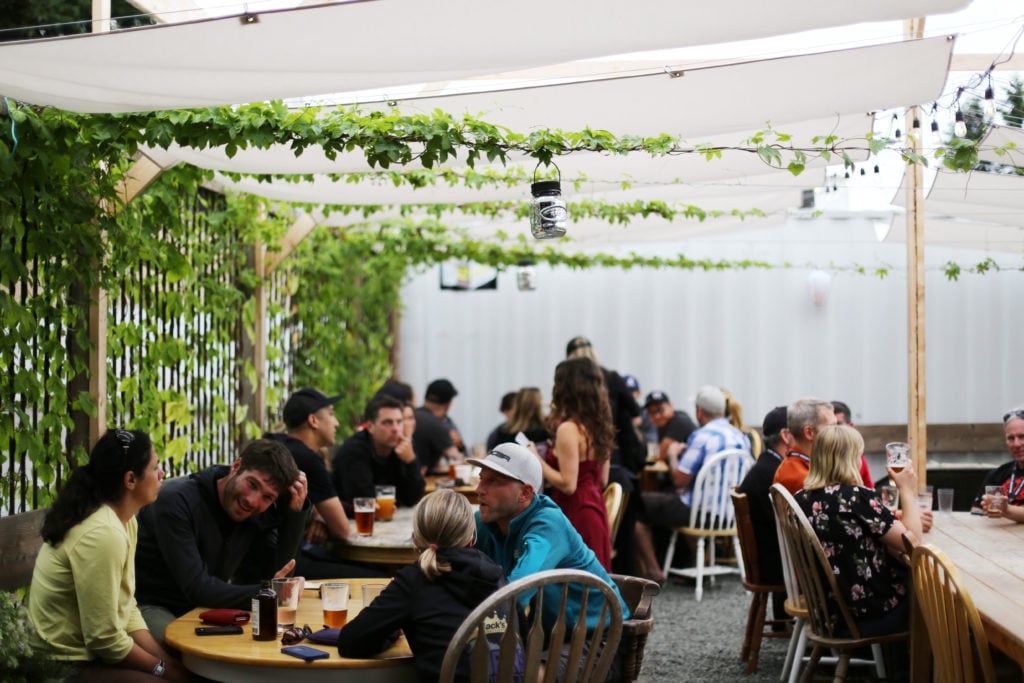 Beers on the patio at Cumberland Brewing Co. Photo: BC Ale Trail

Vancouver Island is a riding paradise and the Island’s biggest city, Victoria, also happens to be the birthplace of Canada’s first brew pub. Spend one night here to fuel up on beer before heading up the Island for pedal fun. 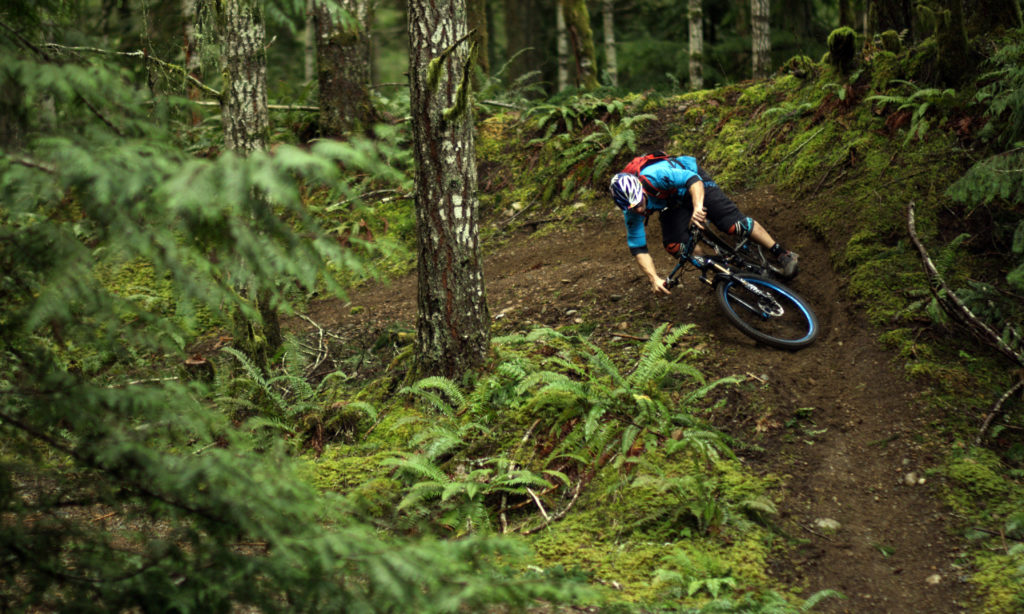 Cruise up the east side for the central Island and hit the trails in Nanaimo and Courtney before arriving at the mountain biking mecca of Cumberland. The network of trails from town centre may feel intimidating, but après at Cumberland Brewing Co. and an overnight at The Riding Fool Hostel will give you time to tackle the trails in two days. Along your way, make sure to get in a few laps at the Mount Washington Bike Park and follow the Nanaimo and Comox Valley Ale Trail. Keep those wheels turning and head north to Campbell River for single-track rides and pints at Beach Fire Brewing, the town’s first craft brewery. 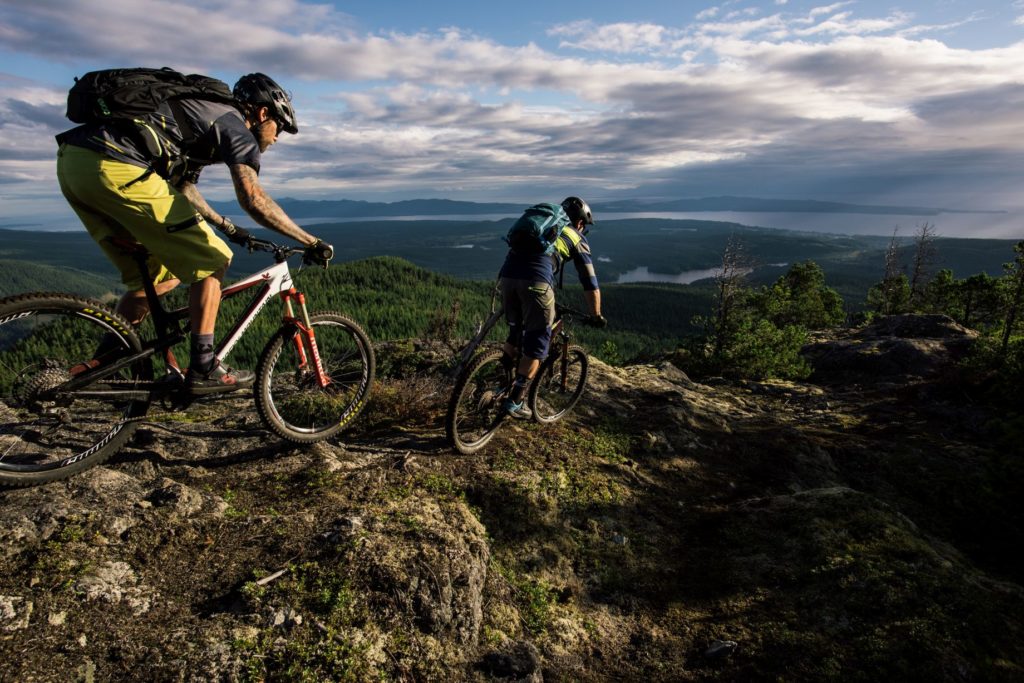 Biking on the Sunshine Coast. Photo: Margus Riga/Mountain Biking BC

While just an hour from Vancouver, BC’s Sunshine Coast feels a world away from city life. Start your Sunshine Coast Ale Trail and biking journey by practicing your skills at Sprockids Park before lounging on the hop farm at Persephone Brewing Company, Gibsons Tapworks, or The 101 Brewhouse + Distillery. Hit the downhill trails in Roberts Creek or at the Coast Gravity Park before pints at The Lighthouse Pub, overlooking the Sechelt Inlet. Or head to West Sechelt for cross-country trails followed by a taster flight of cider at the newly opened The Bricker Cider Company, where you can relax on the lawn and chat up the locals for more bike intel. 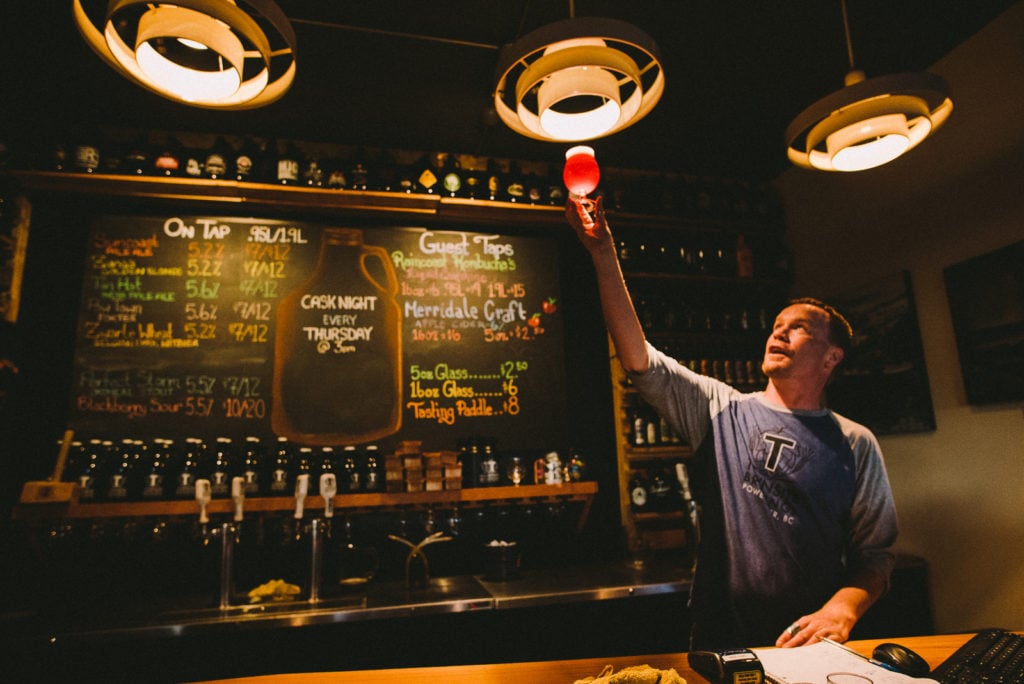 Continue up the coast and board BC Ferries to Powell River. Explore some of the 200+ crowd-free trails before ending the day with a trip to Townsite Brewing in the historic Townsite district. If your legs can take it, jump on the ferry and head on over to Vancouver Island for more riding and brewery hopping. 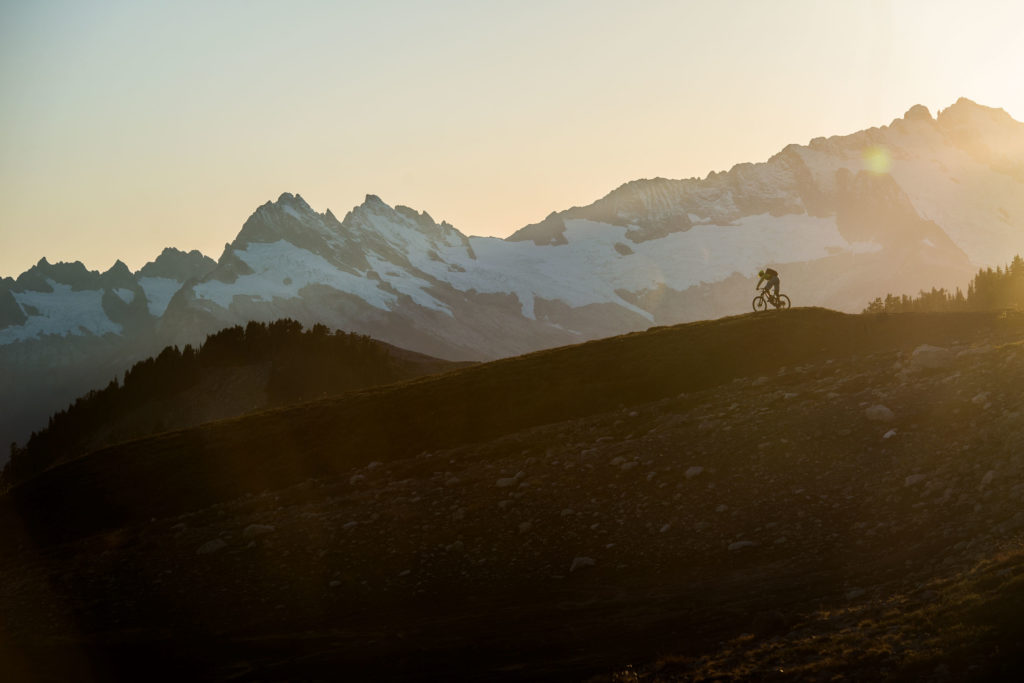 The Sea-to-Sky is quickly becoming a brewery hot bed, the perfect compliment to this area that is often regarded as BC’s mountain biking mecca. This mean two-wheelers now have more options for trails paired with beer in the iconic mountain biking destinations of Squamish, Whistler, and Pemberton.

You can ride the Diamond Head downhill trails or Valleycliff single-track in Squamish before kicking back at Howe Sound Brewing. Or cruise Brackendale and the Highlands between jumps in Alice Lake, followed by beers at Backcountry Brewing or A-Frame Brewing Company. 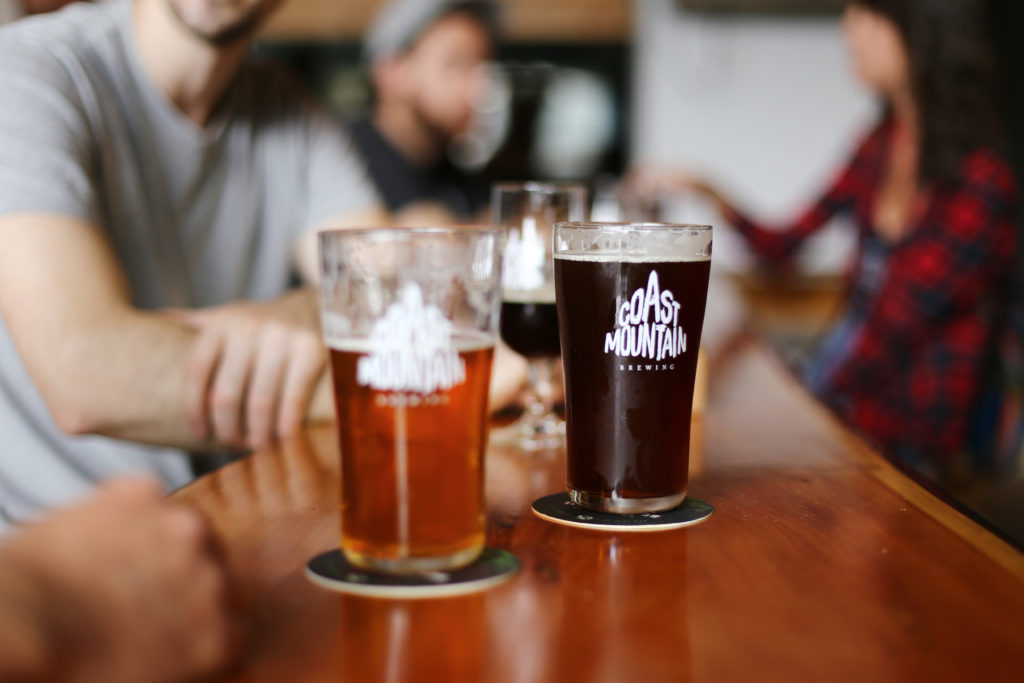 Travel up the Sea-to-Sky Highway, and hit the trails in Cheakamus or Westside before stopping in Function Junction’s Whistler Brewing Company or Coast Mountain Brewing. Once in Whistler, laps in the Whistler Bike Park are a must while the trails in Lost Lake Park, a short distance from the Whistler Village, are a great place for beginners and intermediate riders. Head for the patio at the Whistler Brewhouse or samples beers at Handlebar Café and Après, where happy hour runs three times daily. If you’re looking to push a bit further, Pemberton offers great trails and the newly opened Pemberton Brewing Co. 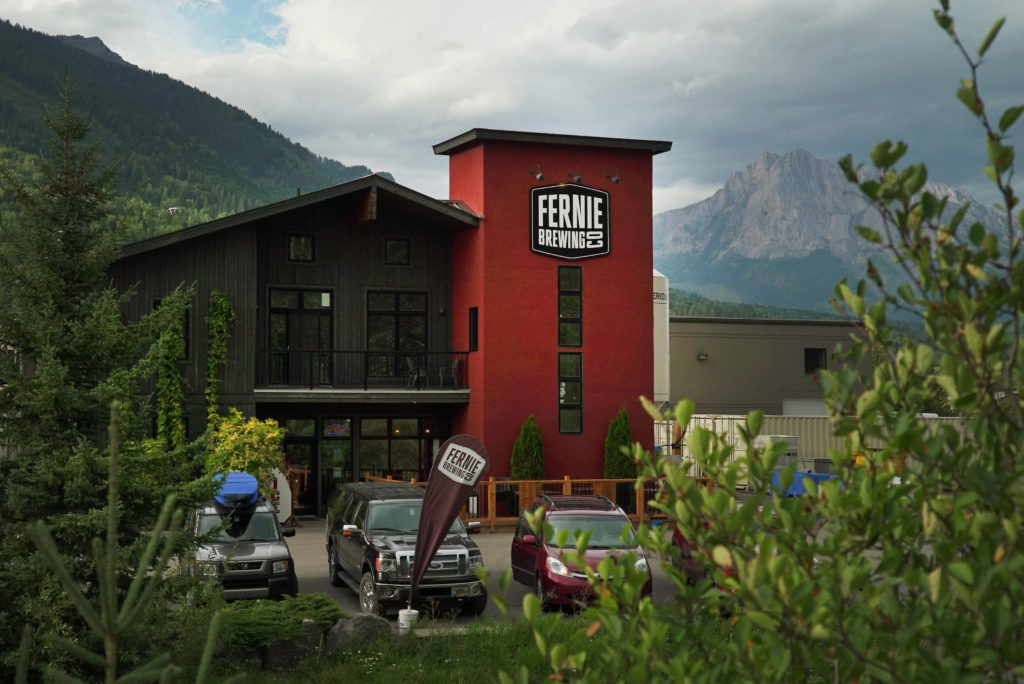 The laid back vibe of the Kootenay Rockies means you’re destined to share a pint with the local riding crew while swapping stories from the trail. Along the Kootenay Rockies East Ale Trail, pair more than 100 km (62 mi) of single-track trails in Golden with Whitetooth Brewing Co., Revelstoke’s classic Frisby Ridge trail with Mt. Begbie Brewing Co. (2017 Brewery of the Year winner at the Canadian Brewing Awards), or laps in Fernie’s lift-accessed bike park with a pint at Fernie Brewing. 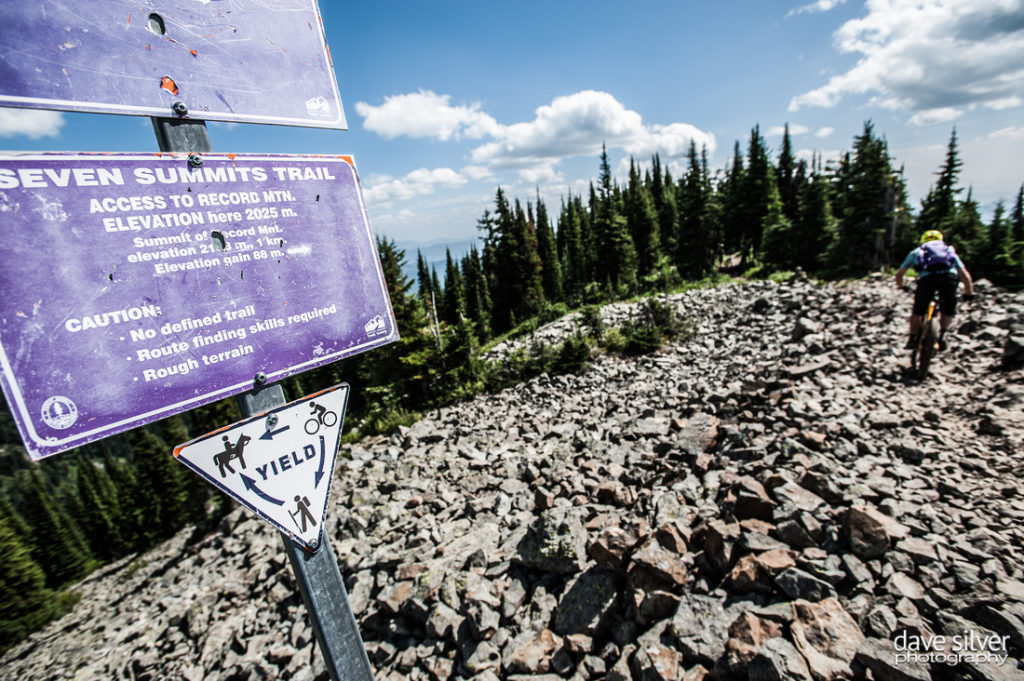 For more local biking culture and craft beer to boot, head for the Kootenay Rockies West Ale Trail and for the mountain towns of Nelson, Rossland, and Cranbrook. Tackle the famous Seven Summits Trail—a 30-km (18-mile) mountain biking epic—and earn your post-ride pints at the Rossland Beer Company. Or head for Nelson and choose from six riding areas and cold ones at Torchlight Brewing Co. or Backroads Brewing Co., or find a pint of Nelson Brewing Company beer at one of the local pubs.

More BC Ale Trails take beer lovers around the province—from North Vancouver and Port Moody, the Fraser Valley and Kelowna, and over to the Island to Cowichan, Nanaimo, and Parksville Qualicum Beach —and these ale trails can easily be paired with more mountain biking adventures. Enjoy responsibly, drink in moderation, always have a designated driver, and remember the order—ride bikes, then drink beer. Always.