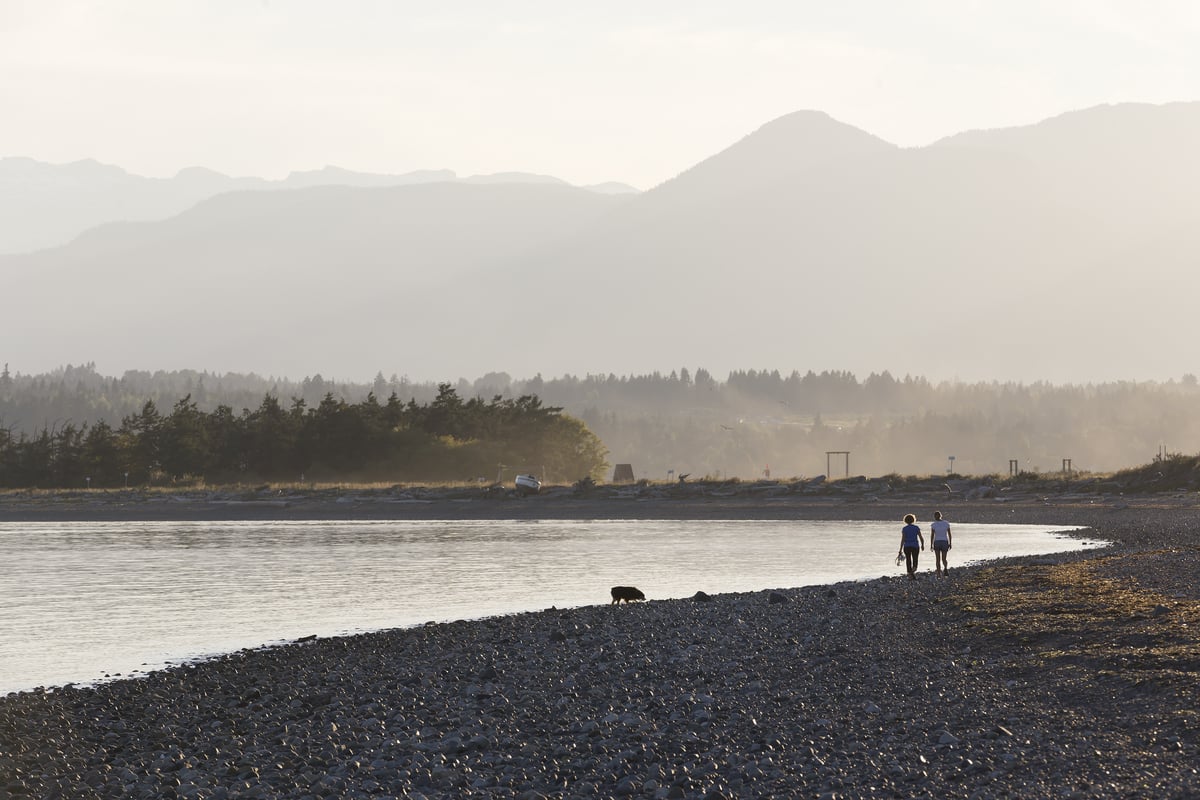 Relax and rejuvenate along this coastal road trip
from Victoria to Port Hardy.

The beaches, forests, and waterfalls along the east side of Vancouver Island will help you let go of your everyday stressors and embrace Island time. The longer you stay, the more noticeable the transformation. As you make your way along the journey, explore Indigenous culture, a thriving art scene, and an abundance of local eateries, craft breweries, and vineyards. Follow the route along Vancouver Island’s eastern coast to discover this colour mosaic of nature, culture, and cuisine—this is one summer trip you’ll never forget.

If you’re coming from Vancouver, your trip begins by following Highway 99 south through Richmond and across the Fraser River before heading south again on Highway 17A to 17 which leads directly to the Tsawwassen Ferry Terminal.

Sail from Tsawwassen, south of Vancouver, with BC Ferries, and take in the beautiful ocean vistas as you weave among the Southern Gulf Islands en route to Swartz Bay at the south end of  Vancouver Island.

Start your journey with cultural experiences, attractions, and an exciting dining scene in BC’s capital. No trip to Victoria is complete without a walk by the seashore, whether that’s in the bustling Inner Harbour or on the quiet stretch of Dallas Road across from pretty Beacon Hill Park.

See the Greater Victoria area from an entirely new perspective with a visit to the quiet waterfront village of Mill Bay, where you can spend time at the beach, enjoy expansive views of the Southern Gulf Islands, or hike and picnic in one of the parks in the area. Take the 25-minute ferry crossing from Brentwood Bay to access this hidden gem. Don’t miss the renowned Butchart Gardens, or the spectacular Kinsol Trestle, the largest trestle bridge along the Cowichan Valley Trail. Ride your bike across, or walk across the bridge and marvel at its beauty and structure.

Staying a little longer in Victoria? Read about how you can taste the town, savour the Saanich Peninsula, and explore the neighbourhoods if you extend your getaway.

North of Victoria (via Highway 1), stop in Duncan, known as the “City of Totems.” A not-to-be-missed highlight is a self-guided Totem Tour Walk past dozens of poles, each of which tells a story. This is the traditional territories of the Cowichan First Nation, who have called the area home for thousands of years. Their relationship with the natural environment is one of respect and gratitude, and this relationship is represented in many of the lovingly carved totems you’ll see along the route.

As you continue north along Highway 1, pull into the Somenos Marsh Conservation Area, home to more than 200 different bird species. In the fall, huge trumpeter swans feed here. If you’d like to continue bird spotting, check out The BC Bird Trail, where you’ll find winded adventure throughout the province.

After making friends with the birds, check out the arts scene in the city of Chemainus, best known for its collection of murals depicting the community’s history from its Indigenous population to early European settlers. Stop by the Chemainus Visitor Centre and pick up a map of the mural route, and follow the yellow footprints past more than 40 works of art.

The walk to Ammonite Falls | @mr_wilson3

Also accessible via BC Ferries from the mainland, Nanaimo is a jumping-off point for adventure both on land and on the water. Take a car ferry to Gabriola Island to check out the unique Malaspina Galleries, an area on the shoreline where the sandstone cliff has been eroded over time by the ocean to resemble a cresting wave. Saysutshun (formerly known as Newcastle Island) is a quick 10-minute passenger ferry ride from the Nanaimo harbour, and it is a popular year-round camping destination.

Before you leave the city, you must seek out a local delicacy—the Nanaimo Bar. A graham/coconut/cocoa crust is topped with a creamy custard and finished off with a layer of chocolate. Yum! The Nanaimo Bar Trail is a collection of eateries and bakeries in the city that offer this tasty treat.

While in Nanaimo, get your nature fix by visiting one of the seaside parks, such as Neck Point Park, or hike to Ammonite Falls.

Leave Nanaimo on Highway 19, and you will have a couple of choices. We suggest the scenic route, Highway 19A.

Goats on the roof at Coombs Old Country Market | @glamouraspirit_

Highway 19A takes you along the coast to Parksville, a popular summer destination with long stretches of beach and small-town charm. When the tide is out, it goes out so far that you can barely see the ocean with the naked eye, and it leaves behind a series of tidepools perfect for family fun. Rathtrevor Beach Provincial Park is one of the most popular places in the province to camp, and Parksville Community Park has a lovely beach as well as a huge playground and waterpark for the little ones. Make a day of it and enjoy the fresh sea air and the sounds of the ocean as the tide comes in.

Highway 4 takes you west from Parksville to a series of natural treasures, a highly recommended detour. See the waterfalls at Englishman River Falls Provincial Park or Little Qualicum Falls Provincial Park. And follow Highway 4A to Coombs, where you can visit the Old Country Market for artisan snacks and a glimpse of the famous goats on the roof.

Back on Highway 19A, head north toward Qualicum Beach. Feel the power of an old-growth forest as you walk through the Qualicum Beach Heritage Forest, located just five minutes from downtown. Be sure to visit Horne Lake Caves Provincial Park, where you can take a guided tour of the caves that are home to fossils, underground waterfalls, and crystal formations. These tours are limited to private, small-groups of single-household bubbles. Garden lovers who prefer a more natural look to a highly manicured formal garden will love Milner Gardens and Woodland.

Sunrise over a marina from Goose Spit in Comox | Boomer Jerritt

Another opportunity for a detour presents itself 30 minutes north of Qualicum Beach in the community of Buckley Bay. Take a ferry to Denman Island, and another from Denman to Hornby Island. Enjoy gorgeous beaches, and great camping and paddling opportunities. You can also experience some of the best cold water diving in the world here, with remarkable visibility and abundant marine life. Remember to travel responsibly to Denman and Hornby islands, following all COVID-19 protocols.

When you reach the Comox Valley, the communities of Courtenay, Comox, and Cumberland offer excellent mountain biking, a vibrant food and drink scene, and four-season fun at Mount Washington Alpine Resort. This is also one of three Island access points to rugged Strathcona Provincial Park, the oldest provincial park in BC. Just north of Comox Lake, you can access the Paradise Meadows and Forbidden Plateau sections of the park.

Life in Campbell River is all about the water. The community is known as the “Salmon Fishing Capital of the World” for good reason. Experienced guides can take you out in search of five species of Pacific salmon, or on a boat tour in search of wildlife. Humpback whales and transient orcas are commonly seen in these waters, and Campbell River is close to prime grizzly viewing. Grizzly tours are offered seasonally between August and October—book well in advance to secure your spot and see the circle of life unfold among the salmon and the bears.

The Elk Falls Suspension Bridge is another must-do. Look out over the thundering waterfall, and check out the nearby Quinsam River Hatchery. Campbell River marks the end of Highway 19A, but there is plenty more adventure to be had as you continue into Northern Vancouver Island. Immerse yourself in rugged landscapes, explore Indigenous culture, and view wildlife along the way.

Cooking salmon on a beach in Port Hardy | Nathan Martin

As a steppingstone to the famed Broughton Archipelago, the picturesque community of Telegraph Cove makes for a great summer hub from which to enjoy eco-adventures and incredible wildlife viewing tours. The village itself consists of colourful buildings and a boardwalk built over the water on stilts. It’s a very popular whale-watching destination as its location on the shores of Johnstone Strait mean almost as many whales as people.

This northern part of the Island is also rich in Indigenous culture. A short ferry ride to Alert Bay on Cormorant Island takes you to U’mista Cultural Centre and its renowned Potlatch Collection, a culturally rich collection of masks and other ceremonial objects that were restored to the Kwakwaka’wakw people after having been confiscated by the Canadian government and sent to museums around the world.

Highway 19 continues all the way to Port Hardy, the Island’s northernmost community. There are many ways to see this beautiful area: consider taking a kayak, seaplane, or wildife tour. Need a place to stay? Spend the night at the Kwa’lilas Hotel, an Indigenous-owned and -operated hotel that uses local cedar designed to resemble a traditional big house with a smoke hole at the top of the building. Just outside of Port Hardy, enjoy the remoteness and the solitude at peaceful Cape Scott Provincial Park at the northern tip of the Island, and then decide whether to head south again and revisit some of your favourite spots, or take a ferry to BC’s central coast and keep exploring.

A road with varied landscapes, stops and views, the loop is a popular trek amongst driving enthusiasts

The longest of the Vancouver Island routes, the Nanaimo to Port Hardy trek also affords the opportunity to take things at full speed

From Vancouver Island to the Sunshine Coast with Yvonna Chow

A road with varied landscapes, stops and views, the loop is a popular trek amongst driving enthusiasts

The longest of the Vancouver Island routes, the Nanaimo to Port Hardy trek also affords the opportunity to take things at full speed

From Vancouver Island to the Sunshine Coast with Yvonna Chow

We all have a role to play in ensuring safe and responsible travel in British Columbia.

Check Drive BC for the latest information on road closures around the province.

Follow these tips to travel safely and responsibly in BC this season.

Discover everything from luxury hotels and B&Bs to wilderness lodges and campsites.