Andrew Steiger, an illustrator based in Los Angeles, journeyed to Vancouver Island in September 2016.

Here’s how he describes his journey. 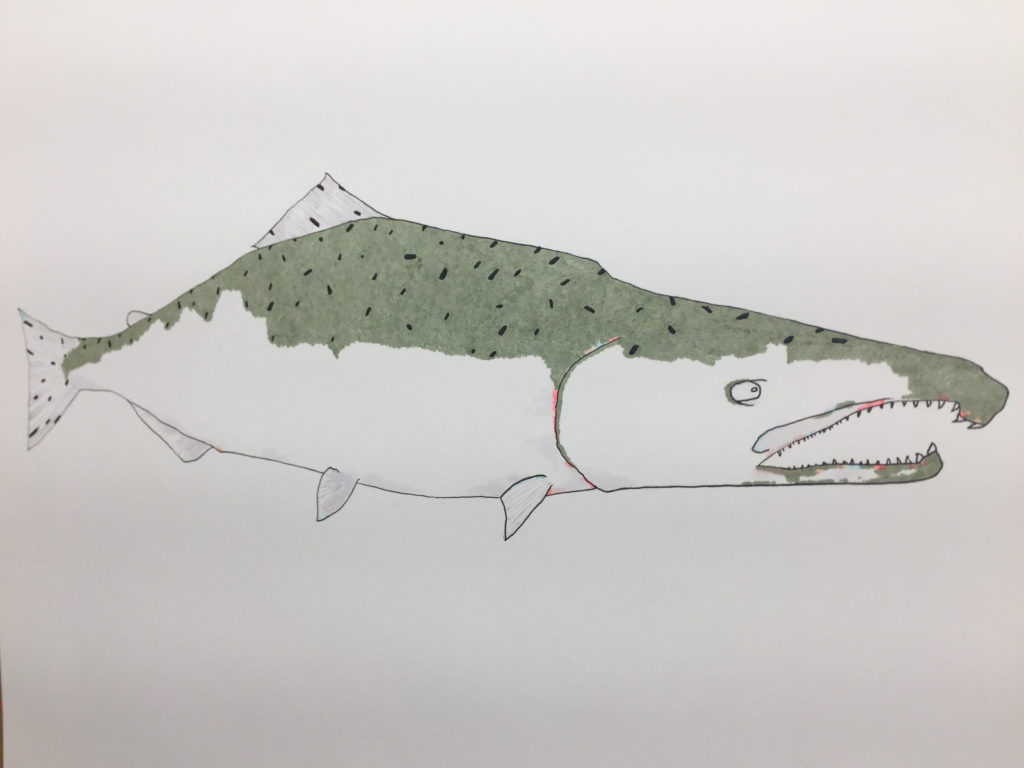 This piece depicts a creature that is bold and fearless. The salmon has been evolving for tens of thousands of years. It looks like a dinosaur, and it endures countless battles in the ocean and some of the strongest currents of any living creature. Yet, somehow, it returns to the stream of its birth for spawning—the path of no return.

When salmon return to their home rivers, they develop new colours and morph into exaggerated shapes, turning into seemingly new creatures—far from the silvery, slippery torpedo silhouettes of their ocean journey. Their teeth begin to snarl, their backs darken; as they transform they look like prehistoric creatures, as old as time itself. 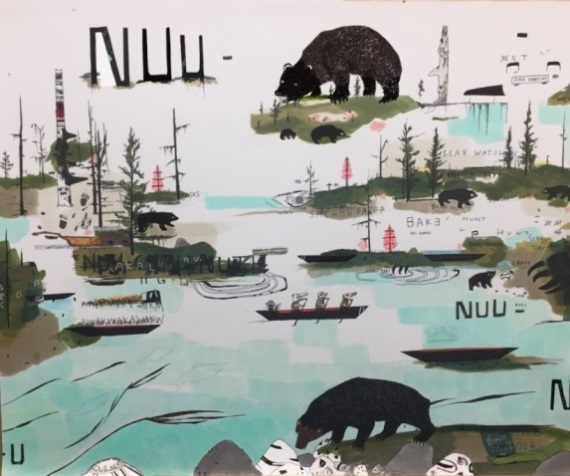 This artwork illustrates the Nuu-Chah-Nulth Nation’s harmony with the earth. It was inspired by a black bear-viewing excursion with First Nations master carver Joe Martin on the west side of Vancouver Island, near Tofino.

Bears catch their lunch under rocks, which have special powers and intricate designs. The wooden salmon-bake holders—a traditional tool used to feed entire villages during a potlatch—represent the kind and generous nature of indigenous people. Ancient totem poles that are being reclaimed by the earth speak of power. And a canoe paddled by a wolf, a bear, a thunderbird, and a cedar hat-wearing skipper is marked by two white diagonal stripes—the same markings used by Joe Martin. 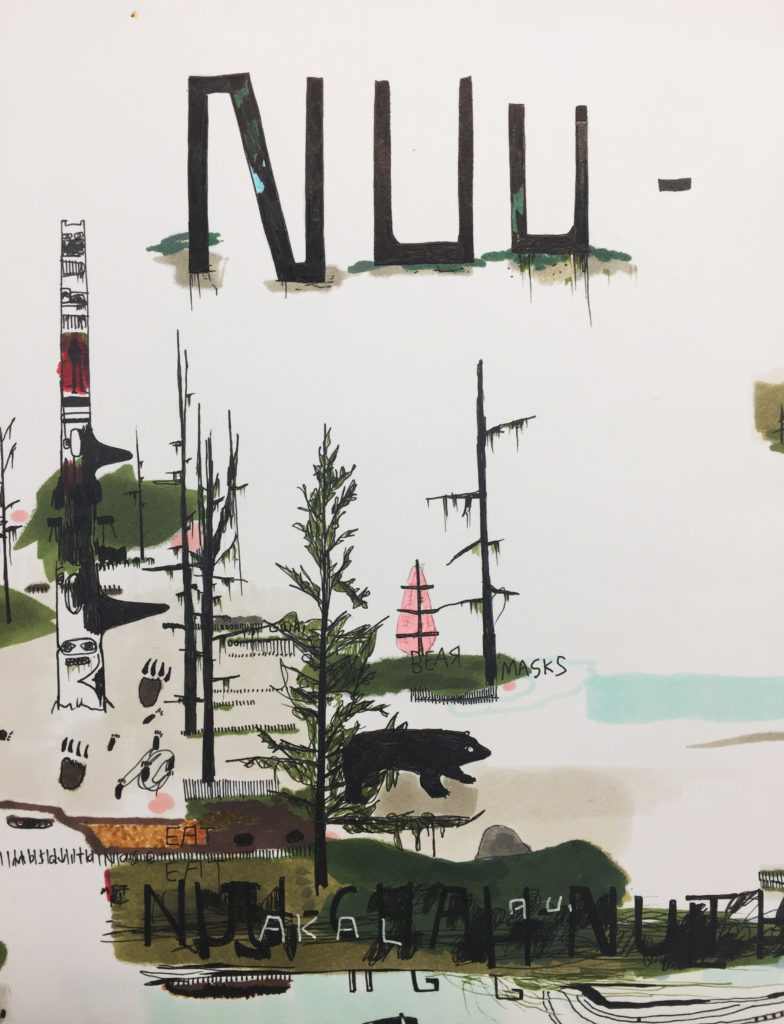 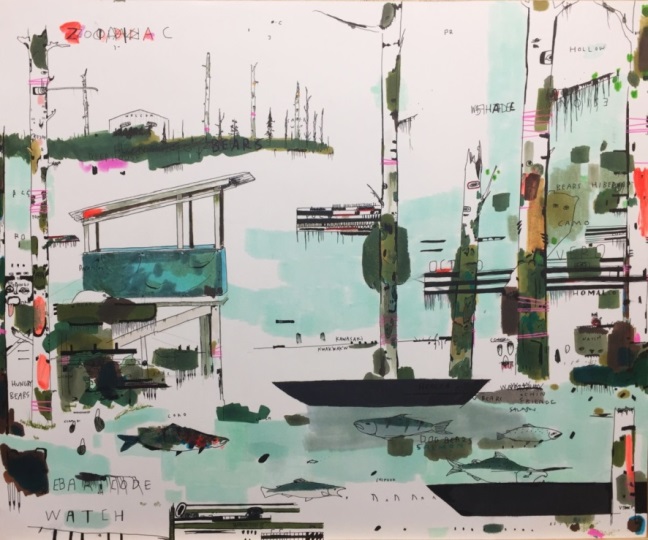 Inspired by a Homalco wildlife tour, this offering reflects the thrill of spotting grizzly bears in a wild environment—you never know what’s lurking over…THERE! The bear-viewing platforms were a huge inspiration, both structurally and ideologically.

Some of the trees along the trail to the bear-viewing towers were covered in multi-coloured tape. Some were painted fluorescent pink and blue. To me, these were futuristic totem poles—or spirits of the forest—worthy of celebration. Black dug-out river canoes show how First Nations traditionally travelled these waterways. 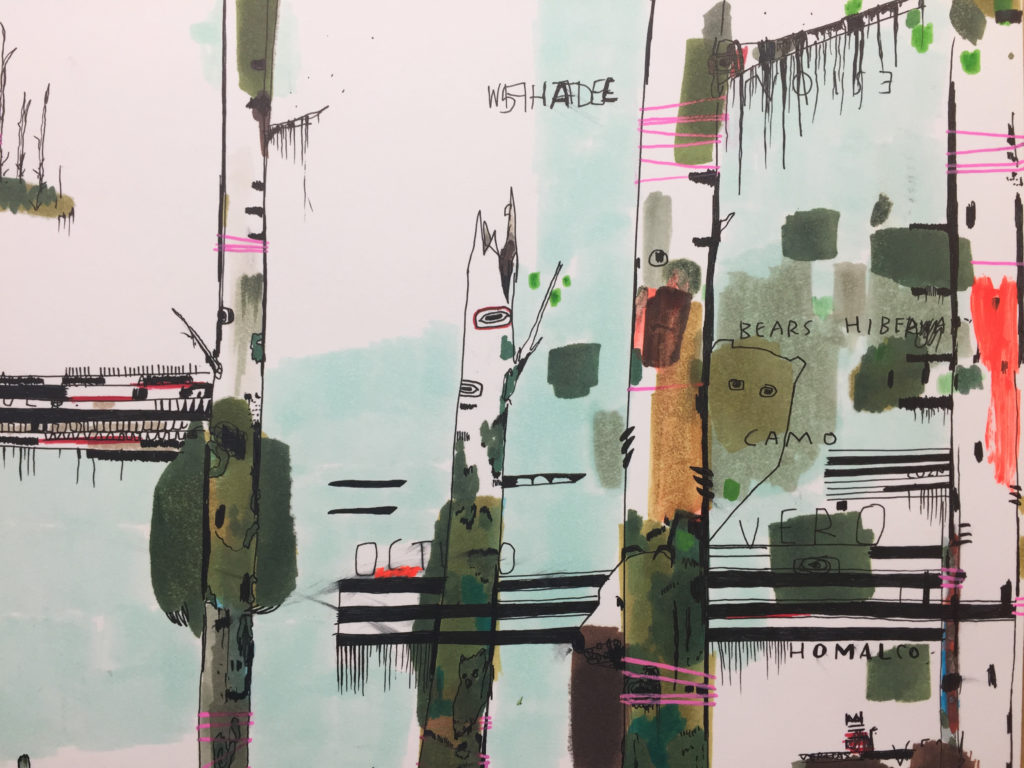 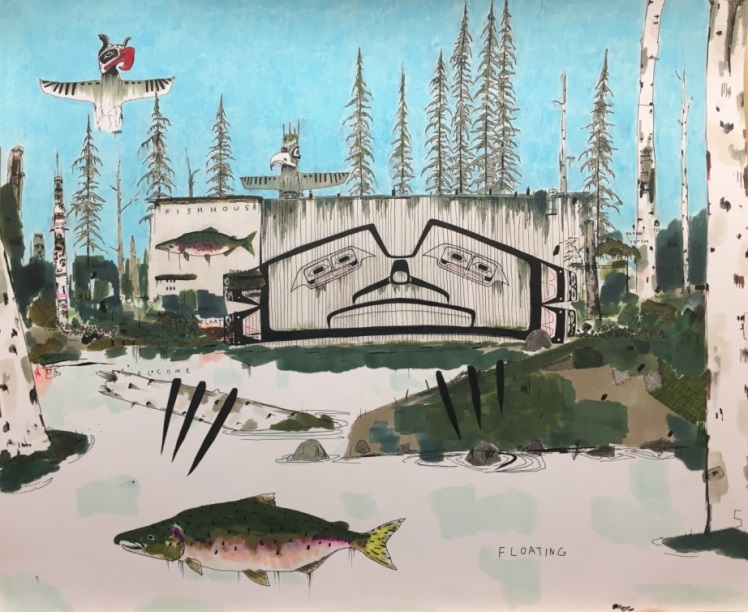 In traditional Pacific Northwestern style, giant spirit animals and totemic creatures were cast onto the fronts of coastal houses by skilled and patient First Nations artists. The animals represented told the story of those who dwelled within. There was the Thunderbird House, the Killer Whale House, and for me it was all about the Fish House. In this piece, the creatures come to life, seemingly crawling off the page and into your home. (Don’t worry, most of them are friendly.) 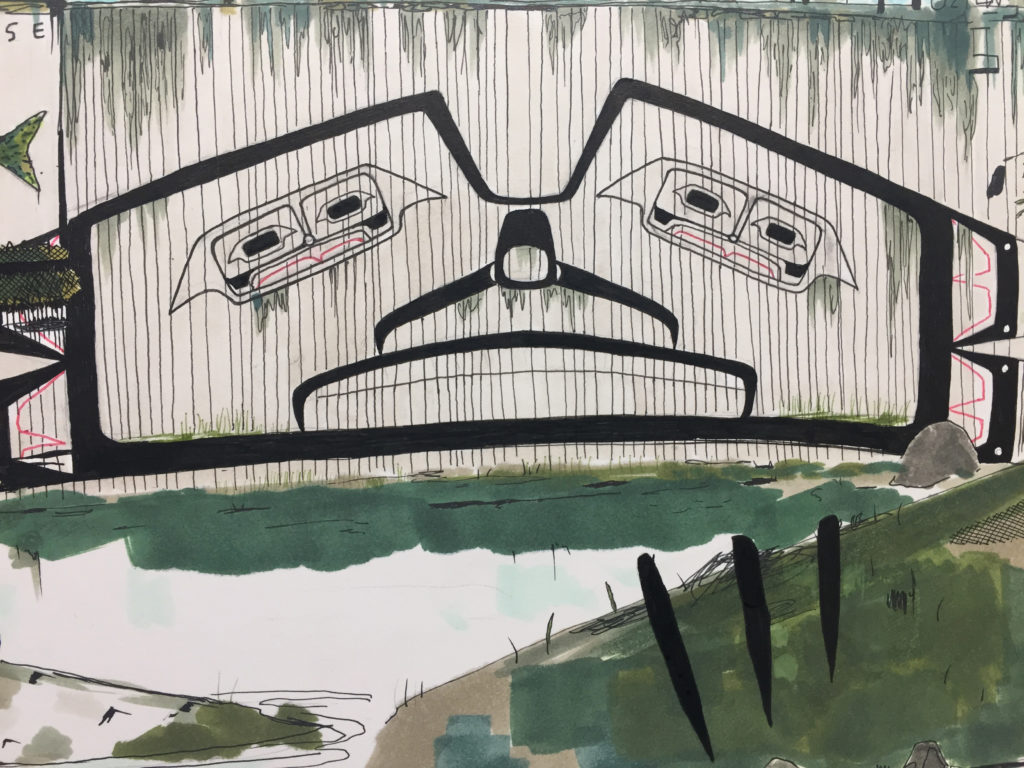 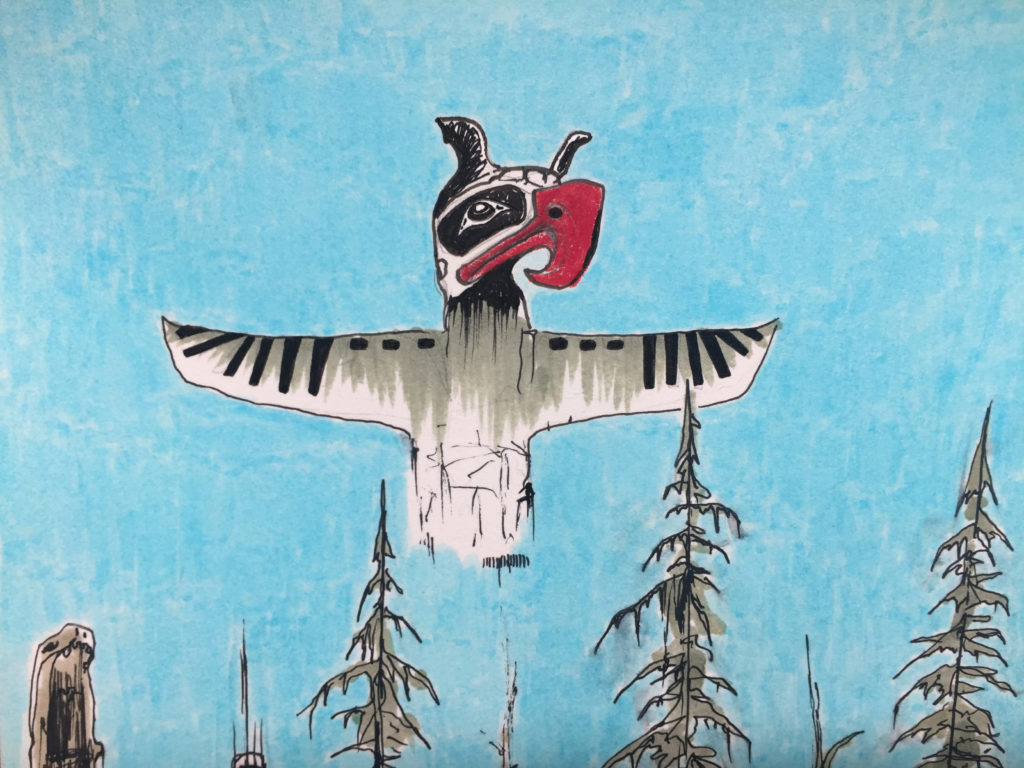 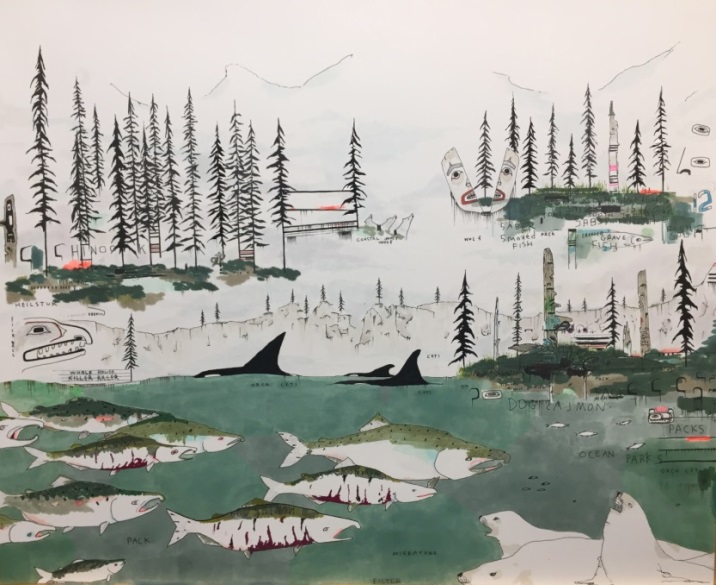 This piece showcases Vancouver Island’s vast treasures—its endless coves and passageways, the towering cliffs, the red cedar trees and Sitka spruce. The water is teeming with life, the spirit of the land is interwoven with the trees, and the traditional Coast Salish blanket patterns create a rhythm so unique. I wanted to blend these things. Plus, these are the coolest salmon, ever—the colours of the dog salmon, the shoulders and strength of the chinook. There are hungry sea lions looking for a meal, an ever-present orca pod, and a pack of howling coastal wolves, an uncommon sight. There’s also a ritual mask represented here, a traditional ceremonial artifact used to mark a rare but ancient practice. 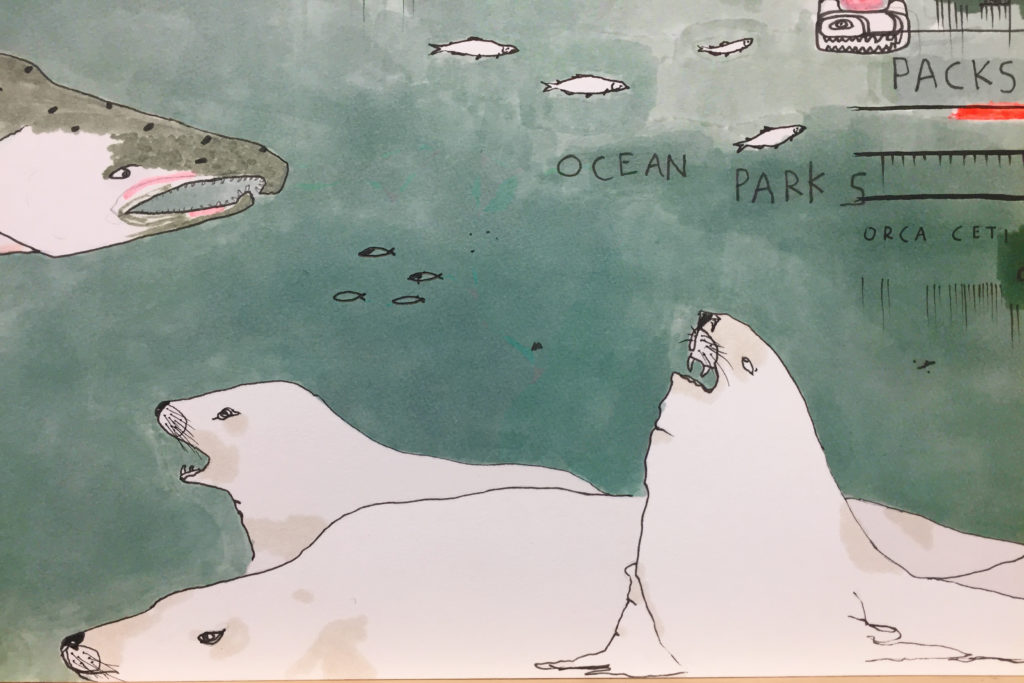 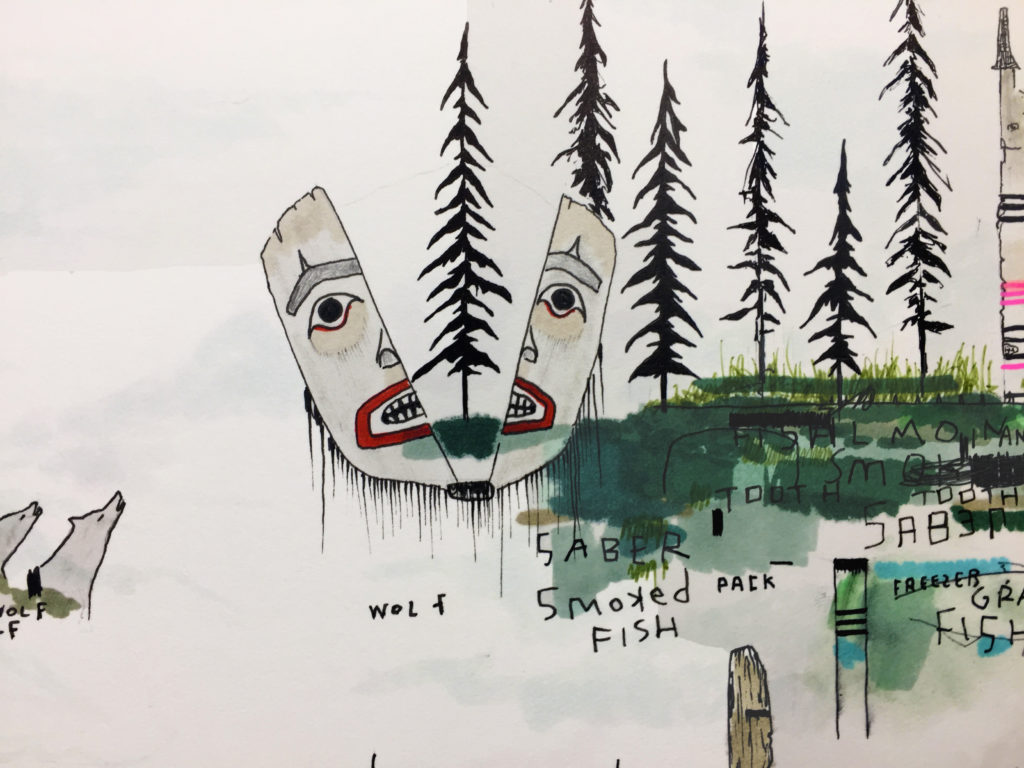