While I knew northern British Columbia was scenic, I didn’t realize what that meant until our journey got held up by wildlife. Sailing to the Khutzeymateen Grizzly Bear Sanctuary on a bear-watching day trip from Prince Rupert, the captain halted our boat so we could ogle a group of seals hanging out on the rocks. Shortly after, he stopped again for a pod of five transient orcas, and we excitedly rushed to the rails to watch them swim. We didn’t get very far before stopping again when the captain spotted two humpback whales, and we spent a giddy half hour snapping photos until they gracefully flipped their T-shaped tails and disappeared into the dark waters.

Eventually, he gently informed us that we needed to move on. “I’d like to remind you that this is a bear-watching tour, not a whale-watching tour,” he announced, tongue-in-cheek, from the bridge. Then he noted that the land mass we could see in the distance was Alaska, so we might want to turn off our cellphones to avoid roaming charges. 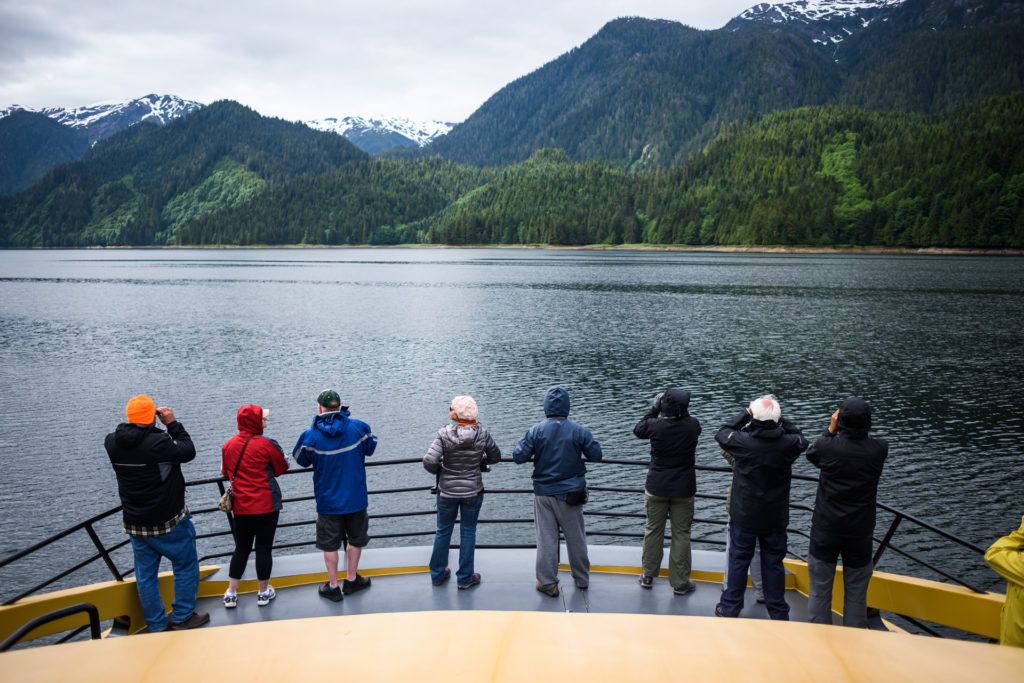 On the watch for wildlife in the Khutzeymateen Grizzly Bear Sanctuary north of Prince Rupert. Photo: Andrew Strain

Alaska. This wild, untamed wilderness and boat-stopping wildlife is what many people associate with Alaska. They don’t think about northern British Columbia, which stretches just east of the Alaska panhandle and south down the Pacific coast, including the islands of Haida Gwaii. People take cruises to Alaska, they watch movies featuring the vast, rugged terrain, and they read books about intrepid explorers through history. But adjacent to Alaska, northern BC doesn’t bask in the same limelight. If Alaska is the movie star, then northern BC is the girl next door. And as Hollywood has shown us time and again, once you finally notice the girl next door, you wonder what took you so long.

While I have lived in Vancouver for the better part of my life, I had never really explored the northern part of the province. It just seemed so…far compared to Victoria, Whistler, and the Sunshine Coast, where I usually spend my BC vacations. It does take a solid day to make your way to northern BC by car, but by air is another story.

Last June, I hopped a two-hour flight to Smithers in the central north and from there headed west to Prince Rupert and the coast. Before the plane’s wheels had even hit the tarmac, northern BC had shattered my misconceptions. I’m not sure what I expected to find in Smithers, but it wasn’t Switzerland. Descending over the valley of patchwork-quilt green, I gazed at the rolling hills, lush fields, and dairy farms that lined the winding Bulkley River. 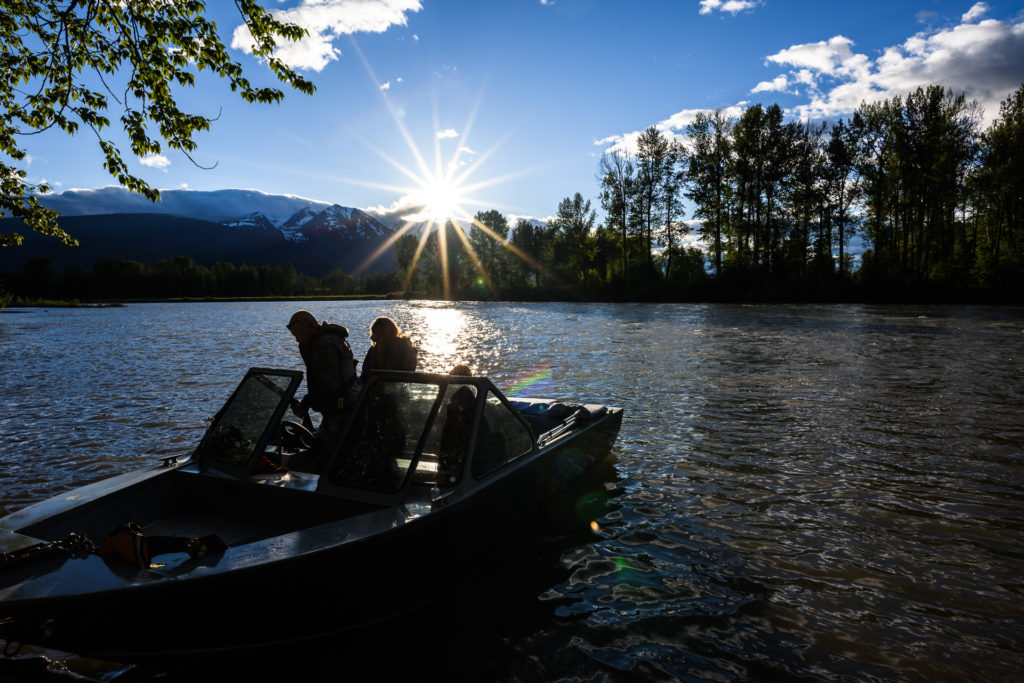 On the ground, the granite-black and glacier-white Hudson Bay Mountain towered over the town, and storefronts fringed with German latticework reinforced the alpine feel. When I happened upon the Sausage Factory deli, I found with delight that they make their own bratwurst from buffalo, elk, and venison. At the nearby Alpenhorn Bistro & Bar, we tucked into hearty schnitzel and spaetzli. Later, I discovered the hipper side of Smithers at the Two Sisters Café. With mason-jar light fixtures, stout-braised brisket sandwiches, and house-made cashew espresso popsicles, this stylish joint wouldn’t be out of place in East Vancouver. On the main street, the cute Bugwood Bean roadside kiosk fuels Smithers’ active population with mighty fine coffee.

Like Alaska, Smithers attracts both residents and visitors for its proximity to epic outdoor adventure. The town is full of mountain bikers, hikers, climbers, and—in the winter—skiers who head up to Hudson Bay Mountain. We got our thrills that evening on an adrenalin-pumping jet boat ride down the Bulkley River, the sun casting a gentle backdrop to the roaring white-water action. Back at the hotel, when my heart rate had returned to normal, I pulled the blackout blinds to sleep. It was just dusk at 10:40 p.m. 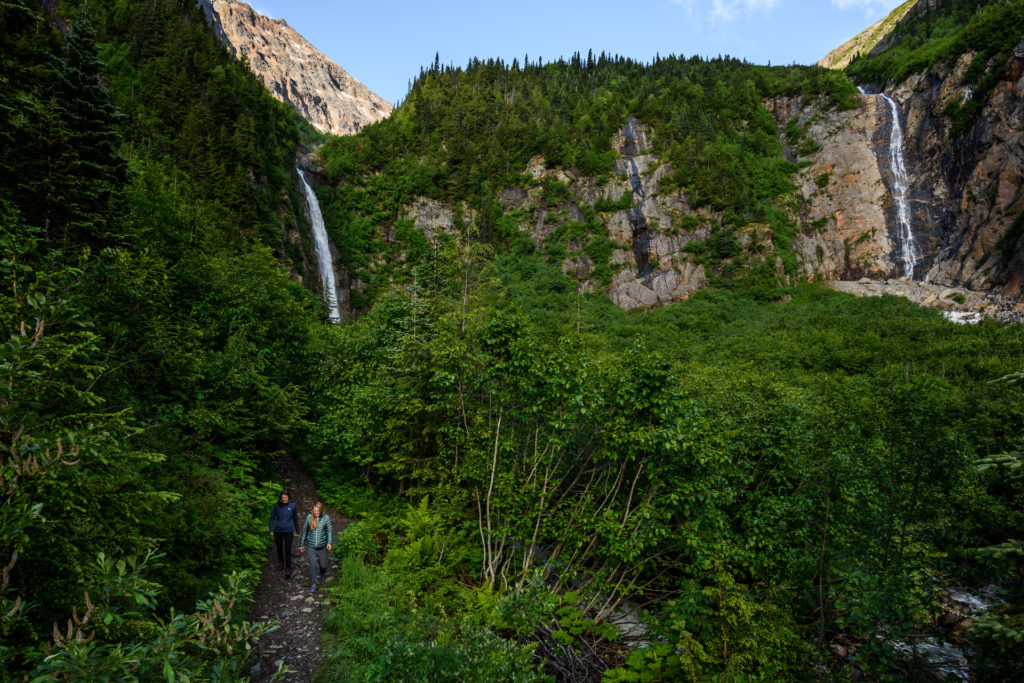 When the sun rises at 4:50 a.m., there’s no excuse not to get a jump on the day. We started with an easy hike to Twin Falls, which cascades 167 metres (550 feet) from a receding glacier. Gushing glacial water is something people associate with the north, and we saw plenty of it on our 3.5-hour drive from Smithers to Prince Rupert. At one point, my companion casually pointed out the fourth waterfall we’d passed in half an hour. Originating high in the Coast Mountains, it tumbled down in a glorious trellis until it disappeared into a jumble of 50 shades of forest green. Ahead and behind on the highway, there wasn’t a human being in sight. “Anywhere else in the world, there would be a parking lot below each waterfall with a hoard of people—plus mini golf and a bouncy castle,” she noted.

Communities were few and far between and full of interesting history and culture. About 30 kilometres (19 miles) west of Smithers, Moricetown Canyon is a particularly scenic spot where the Bulkley River narrows to rapids. Here, members of the local Moricetown Band still fish for salmon using a traditional dip net or gaff pole. While our timing wasn’t right to witness this, the Moricetown Interpretive Centre and Museum, perched high on a hill, gave us a great overview of the Witsuwit’en First Nation’s fishing methods as well as a bird’s-eye view of the canyon. 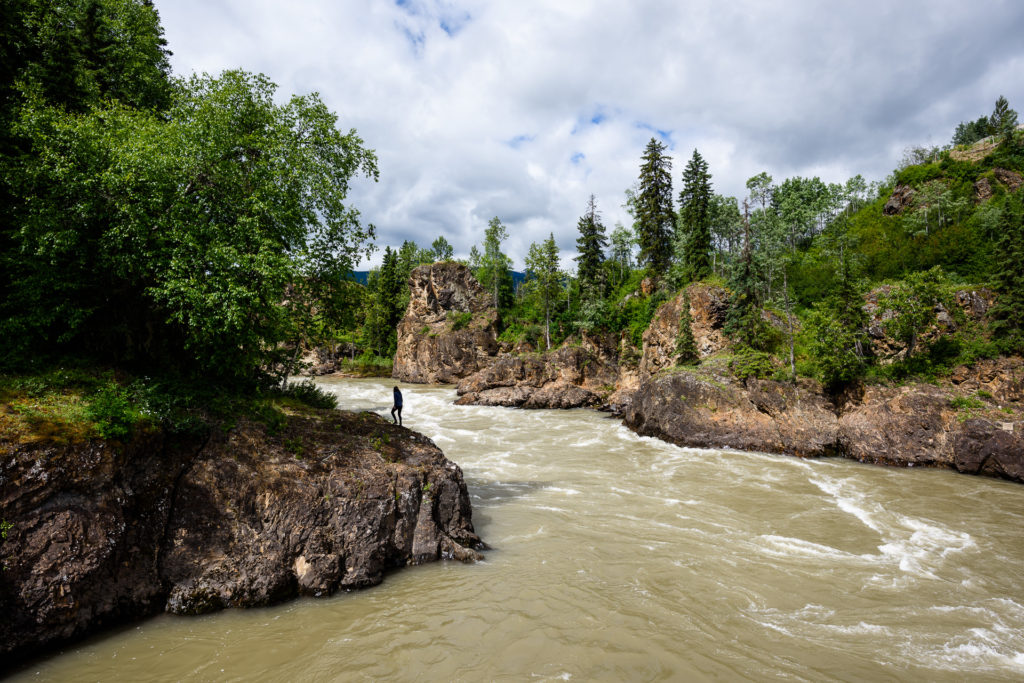 The water rages at Moricetown Canyon on the Bulkley River. Photo: Andrew Strain

We stopped for lunch in the Hazeltons, two tiny towns dwarfed by the granite spires of the Roche de Boule mountain range at the confluence of the Bulkley and Skeena rivers. With totem poles facing the water, the ‘Ksan Historical Village and Museum is a beautiful grassy site with a reconstructed Gitxsan village. A guided tour of the interiors included audio stories about potlatch ceremonies and an up-close look at artefacts, including as a traditional red robe sewn with dozens of mother-of-pearl buttons and a mask adorned with sea lion whiskers. 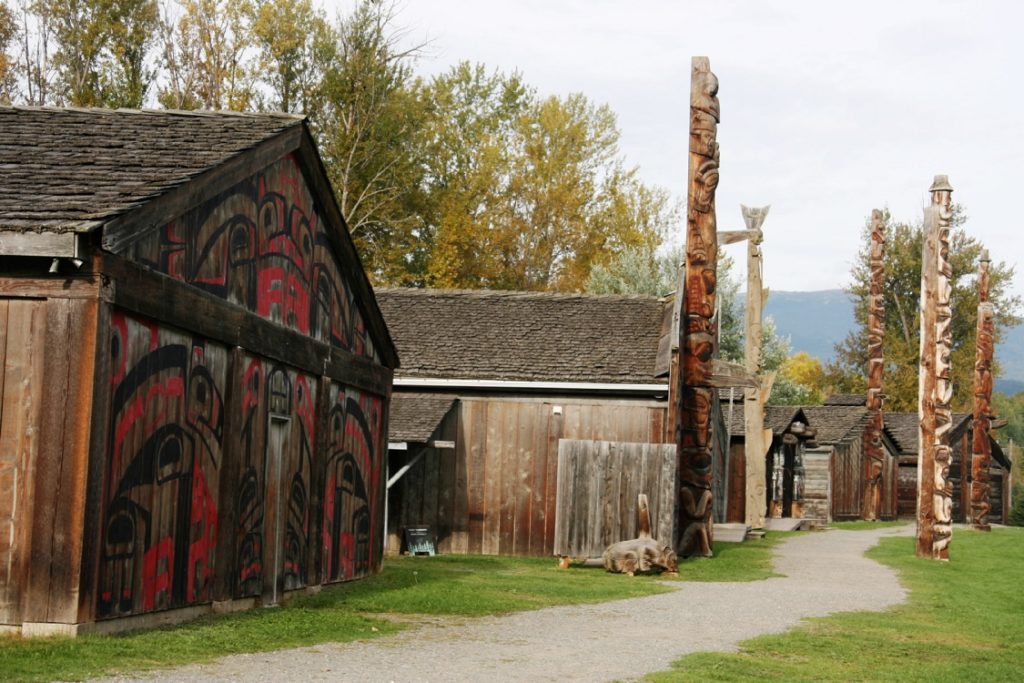 A guided tour takes you inside the traditional dwellings at Ksan Historical Village and Museum. Photo: Dannielle Hayes.

Farther on, the river became so wide that I began to wonder if we were passing a lake. In fact, we had reached the mouth of the ocean at Port Edward. A stop at the North Pacific Cannery on Inverness Pass put the geographical significance in perspective.

While Alaska is known for its salmon, BC also has a storied history with this fish. Its recent heyday was in the early 20th century, when 50 of the 200 salmon canneries on the BC coast operated in this area. “The story is that there were so many salmon you could walk across the ocean and not get your feet wet,” said Laurie Davie, general manager of the North Pacific Cannery, on a lively tour of the historic site. She explained that the North Pacific Cannery processed salmon from 1889 until 1968, when overfishing depleted stocks. Although it closed in 1981, the plant and workers’ village has since been partially restored and offers a fascinating window into the salmon canning process and the life and times of the First Nations, Chinese, and Japanese people who lived there. 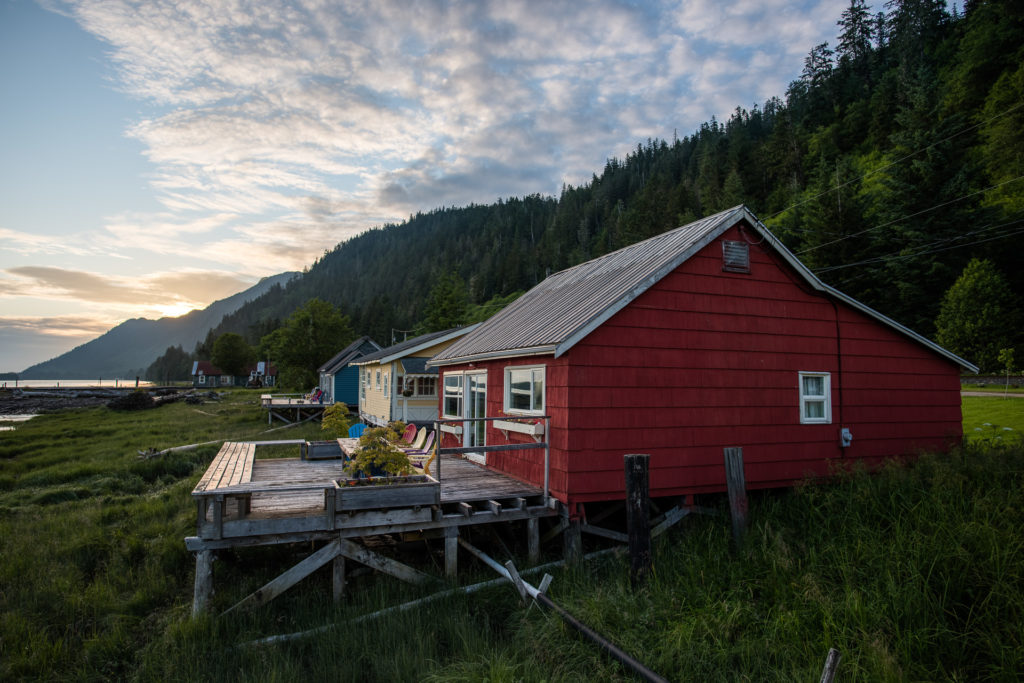 Sunsets are beautiful from the cabin decks at Cassiar Cannery. Photo: Andrew Strain

We spent the night at Cassiar Cannery, another historic cannery with accommodation in beautifully restored heritage cabins, where we kicked back in Adirondack chairs on the deck overlooking the Skeena River. The next morning, a paddle around Lelu Island in Inverness Pass gave us a different perspective on the estuary. Tour guide Chris Ridler explained that the area is a haven for bird watchers. “Every kind of sea bird you can imagine comes here for herring season in March and April,” he said. Indeed, while the eagle may be iconic of America, I saw dozens of the steely-eyed birds that morning and throughout my short time in northern BC. My ocean-view room that night at the Inn on the Harbour in Prince Rupert even came equipped with a pair of binoculars. 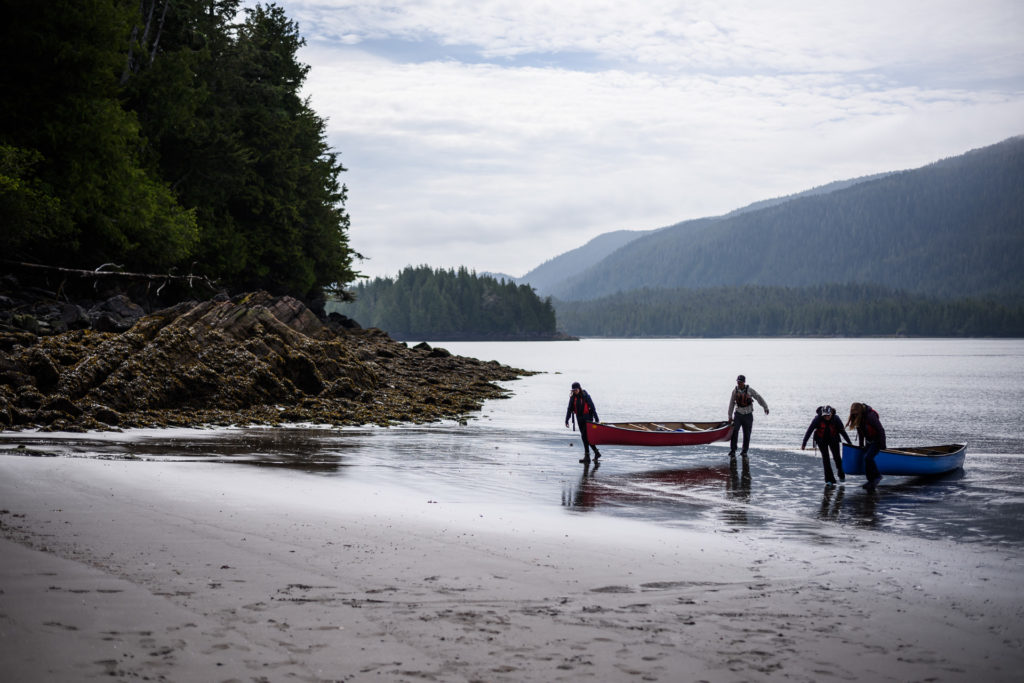 From Prince Rupert’s docks, we headed out the next day for an ocean fishing expedition. While salmon stocks have declined in Pacific Northwest waters, licensed recreational sport fishing is permitted. A day at sea gave us the thrill of catching our own spring salmon to supply our summer barbecues.

With salt in our hair and fish guts on our shoes, we strode triumphantly into Wheelhouse Brewing Company to celebrate. Over a pint of Scurvy Dog Spruce Ale—made with hand-picked Sitka spruce tips—we traded fish stories and recipes with two local women, who shared iPhone snaps of their own prized catches. The staff invited us back for the weekly volunteer night, when those who help with simple tasks such as labelling bottles are rewarded with craft beer. 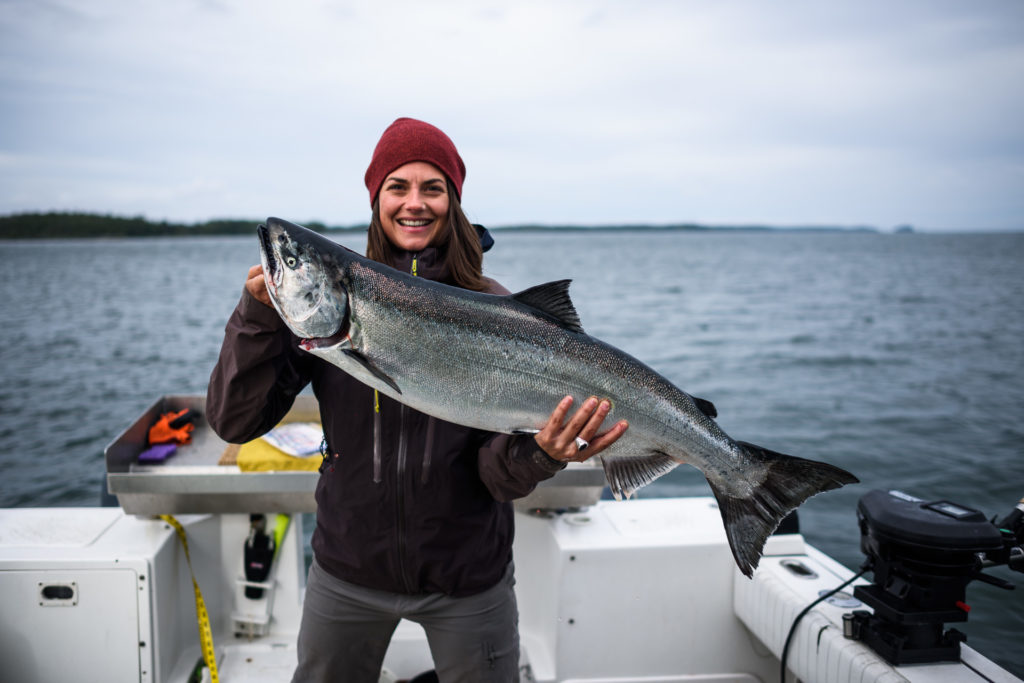 Salmon fishing in Prince Rupert can result in tales of the big one. Photo: Andrew Strain

After getting closer than we’d ever been to salmon, eagles, seals, and whales, we did eventually also see bears. On our day trip to the Khutzeymateen Grizzly Bear Sanctuary, we spotted several scruffy male grizzlies through binoculars from the boat. We also got close enough to shore to watch a mama grizzly walking on a rocky ledge to the beach. As her three cubs looked on, she waded into the ocean as if it were a giant hot tub. 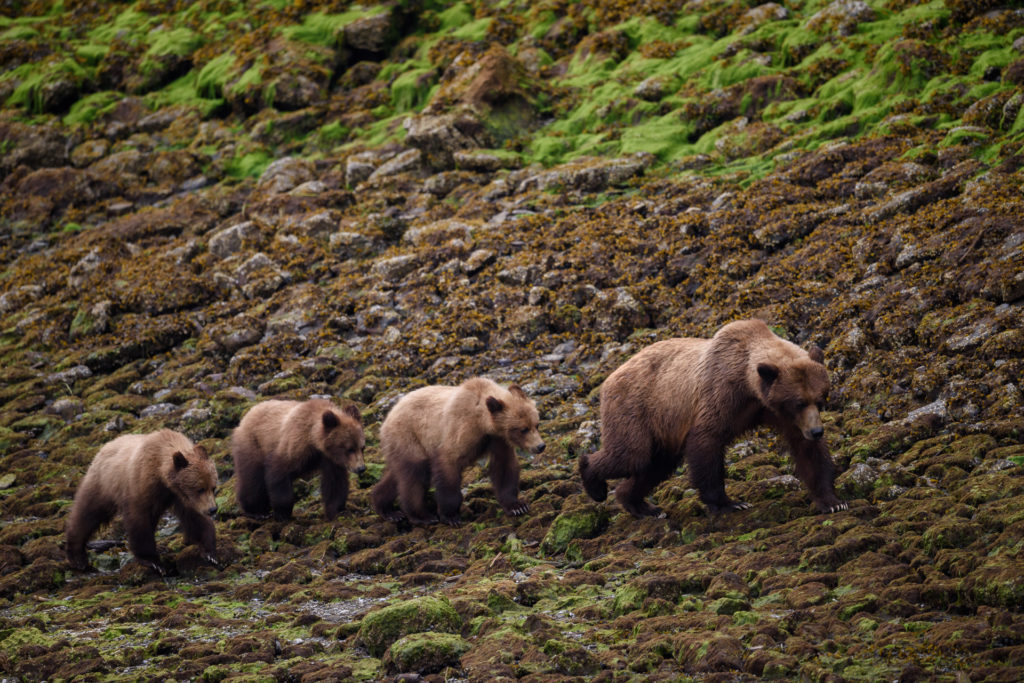 A mother grizzly and her cubs walk a shore ledge in the Khutzeymateen Grizzly Bear Sanctuary near Prince Rupert. Photo: Andrew Strain

Gaping in awe from the boat, I felt like I was on the set of an IMAX movie. As we moved away from shore and the bears became mere specks on the beach, the immenseness of the wilderness setting came into focus. It was as if the camera had pulled back and all you could see was dense forest fringing the ocean, concealing the creatures within.

Somewhere out there, not far away, was Alaska.