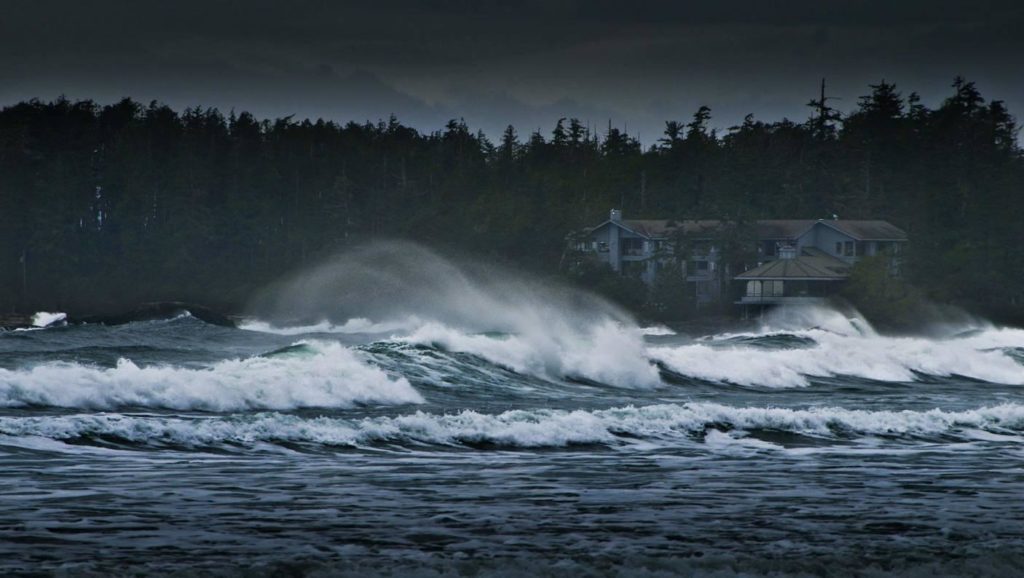 The waves are a major draw at Tofino’s Wickaninnish Inn. Image: Sander Jain

The concept of celebrating winter storms, rather than avoiding them, was the brainchild of Charles McDiarmid of Tofino’s oceanfront Wickaninnish Inn. He grew up loving wild weather and figured others, too, would revel in braving the Pacific gales that send giant breakers thundering onto Vancouver Island’s long, west coast beaches.

He was right. That’s why the Wick Inn supplies slickers and gumboots that dehydrate in a special drying space outside their Driftwood Café while guests relax by a crackling wood fire, red-cheeked and cosy, savouring a special in-the-moment bliss that Danish people have a word for—hygge (“heu-gah”).

Coastal storm watching launched in the mid-’90s and has since gone viral. Enthusiasts pack up rain gear, warm blankets, and books, stock up on goodies, and settle into oceanfront B&Bs, lodges, and cabins. Surfers ride winter waves on exposed beaches, from Sombrio on the island’s southern tip all the way north to Haida Gwaii, where winds regularly hit more than 40 kilometres per hour November through January. 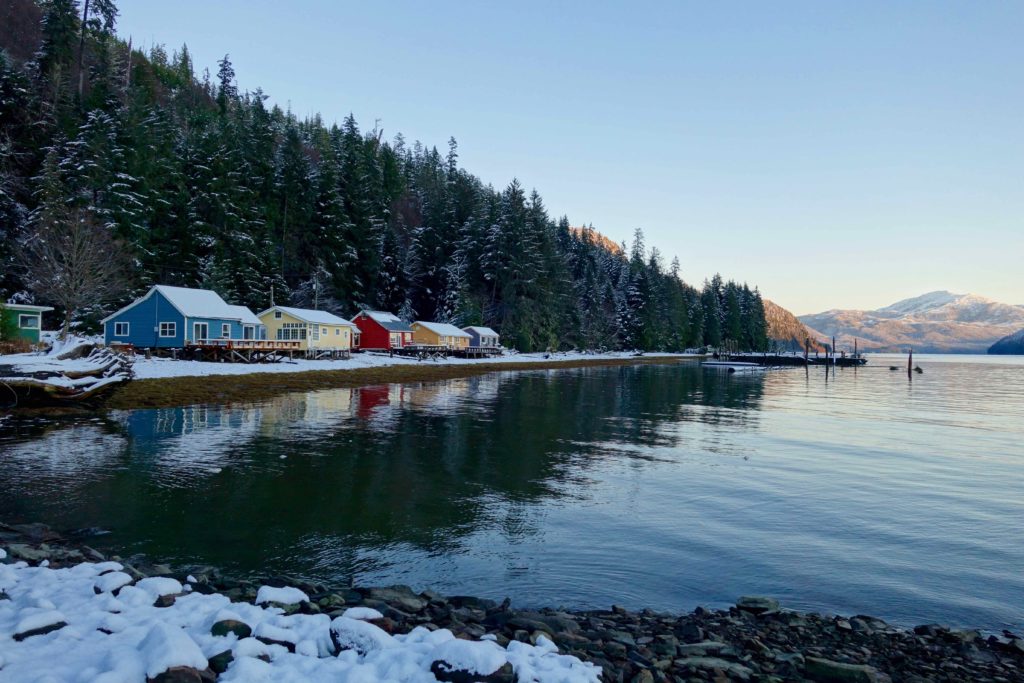 Winter tempests in BC come in all sizes, shapes, and forms. The Cassiar Cannery, on the coast 25 minutes from Prince Rupert in Northern BC, is a unique spot to watch cold dry air from the province’s Interior blast 600 kilometres (373 miles) down the Skeena River smack into warm, moist Pacific air. The collision makes for a dramatic display of billowing clouds and fog punctured by shafts of vivid, low-angled sunshine.

When you’re huddled up at the sheltered river mouth in a waterfront guest house—restored from one of the region’s historic, century-old salmon-cannery towns—storm watching is an ethereal and sometimes surreal experience. Seven-metre (24-foot) tides move right up to your house-on-stilts. Peak storm month is November. Tip: Expect rain and extraordinary light, so bring something to keep you and your camera dry. 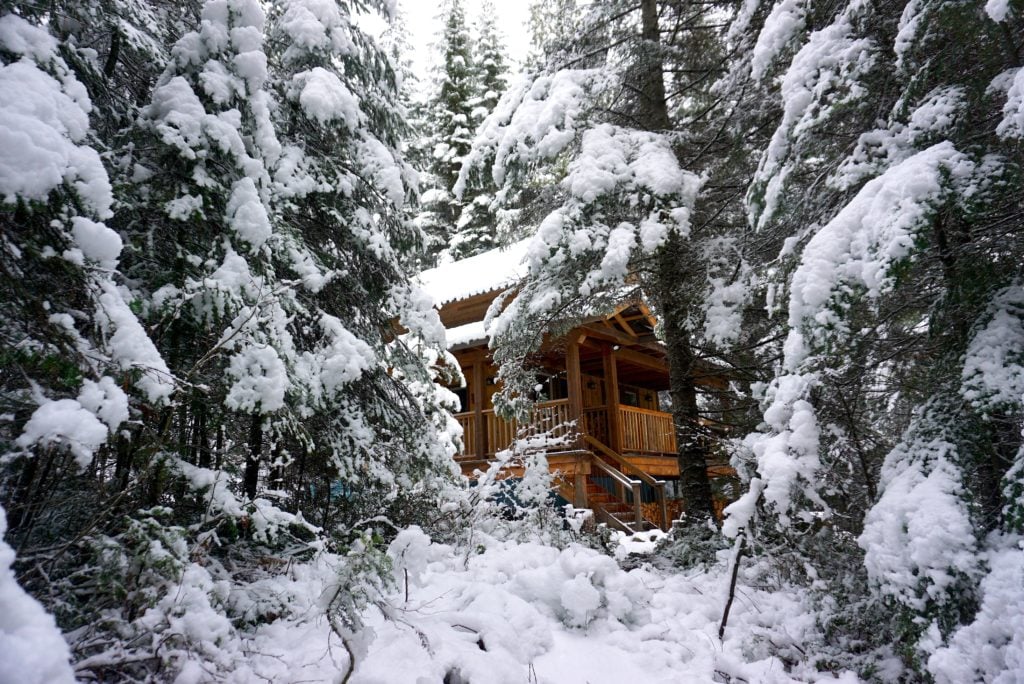 Inland, there are snow storms to savour. In southeastern BC’s Kootenay Rockies, Logden Lodge is set at the foot of the Selkirk Mountains near Nelson, a stone’s throw from Whitewater Ski Resort. Four secluded cabins on 17 hectares (42 acres) of private wilderness make it easy to disconnect. Gather around a blazing bonfire and watch powder drift from the sky, or enjoy the blizzard from your own private covered verandah, bundled in a blanket sipping hot apple cider or Glühwein—another hygge moment. Then go play in the snow, strapping on snowshoes and hitting the trails outside the door or, if you’re a skier, heading for the mountain.

Not far away, Snowwater Heli Ski is exclusive, all-inclusive mountain chic, with six luxe suites in two alpine guest lodges suited for small-group heli-skiing. End the day with a gourmet meal created by Jeremy Tucker, the stellar summertime chef at CedarCreek Estate Winery. Should a storm ground the choppers, a standby Snowcat tractor means that instead of watching the storm from indoors, you can still make powdery turns on virgin territory. On your last night, the sky explodes with fireworks. 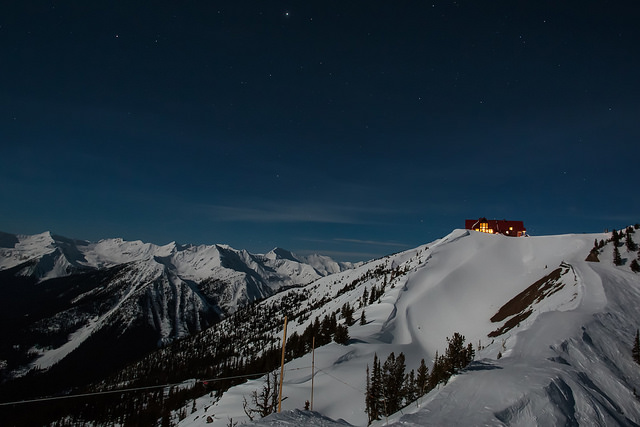 Finally, an exceptional winter-storm-watching spot awaits at the 2,347-metre (7,700-foot) Kicking Horse Mountain Resort near Golden. Two Eagle’s Eye Suites in the chalet offer luxury lodgings, complete with your own butler and private chef. After the gondola shuts down, the peak lodge is all yours—enjoy the fully stocked bar and grand rock fireplace, and the solitude of being the only people on the mountain. Wrap yourself in a blanket and step out onto the deck to embrace the elements as Mother Nature lays down the powder that will guarantee you a pristine, fresh-tracks first run in the morning.