Note: This story was originally published in 2018.

Wild creatures can be elusive, and the best encounters are often about timing. When the greenery starts popping up through the melting snow, animals emerge from their winter hiding places. Many give birth to their young, making spring and summer prime time for wildlife watching in BC. This is also the most thrilling season for whale activity.

Just be sure to follow a few important safety precautions. The general rule is to stay back—keep at least 30 m (98 ft) away from all wildlife and 100 m (328 ft) from predators such as bears—and don’t intervene or feed animals. Follow these guidelines to enjoy watching marine animals safely and responsibly.

Have your camera ready! Here’s what to look out for in spring and summer.

Whales near Victoria on Vancouver Island 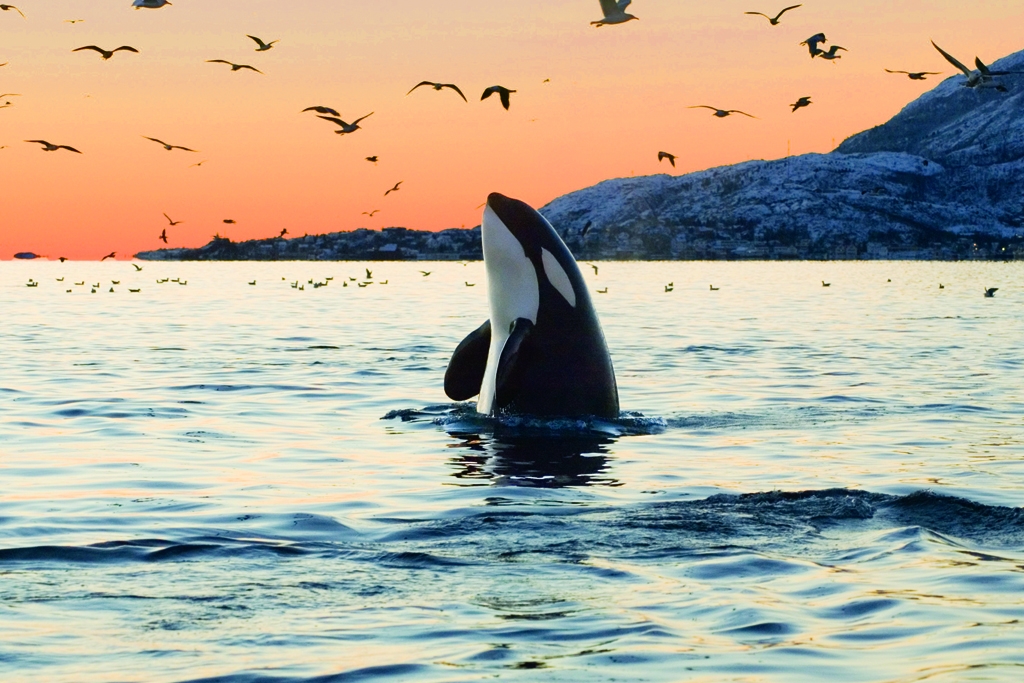 Travel + Leisure named Victoria one of North America’s best whale watching destinations for a reason. Several varieties of whales frequent the cold coastal waters here consistently from April/May to October, and predatory orcas, or killer whales, are the stars. You can also see sea lions and bald eagles, plus playful dolphins, porpoises, and harbour seals.

The very best time to see pods of orcas, which are actually large dolphins, is in summer when they feed on migrating salmon off the Island’s southern tip. You can spot migrating giant acrobatic humpback whales (May/June and September/October) and gray whales (March and April) en route to Alaska, and small minke whales year round. 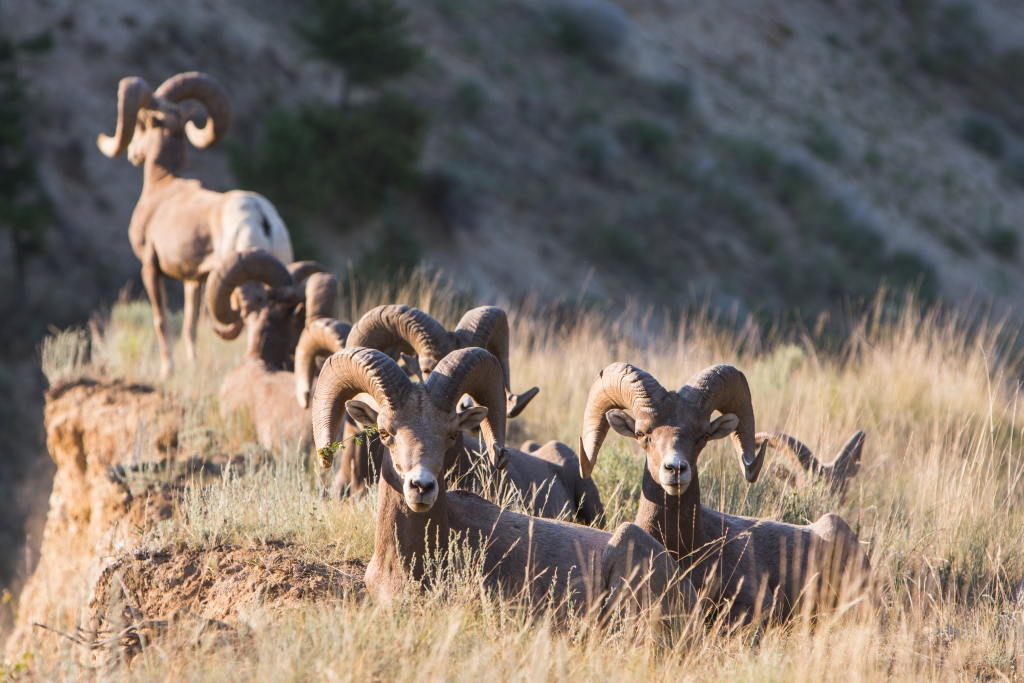 It’s hard not to see wildlife at Radium Hot Springs, thanks to its wetland, valley, and canyon setting at the base of the Rockies. A herd of 150 bighorn sheep are permanent residents, often trotting through town and around the visitor centre from March until early June. In summer, groups of males or females with lambs travel together, and the best time to view them is in the morning or at dusk. You might even meet a few on your way to soak in the natural hot springs.

Other oft-seen critters are deer, elk, bald eagles, grouse, and flocks of gobbling wild turkey—look for toms displaying their showy plumes in spring mating season—and at higher elevations, nimble mountain goats. Return in the fall for the big show: that’s sheep rutting time, when the burly rams butt heads. There’s a November Headbanger Festival, too, with celebrations, workshops, and tours.

Bears in the North Thompson Valley

Grizzlies and black bears like the temperate and fertile North Thompson Valley, flanked by the Monashee Mountains in BC’s central interior, earning Blue River the nickname Grizzly Bear Alley. Bears are most active when they are just emerging from their dens with cubs in March and April (black bears) or May (grizzlies) to feast on grass, berries, and salmon. You’re likely to come across eagles, osprey, white-tailed deer, trout, and perhaps a retiring moose, as well.

Bison and Caribou in Northern BC 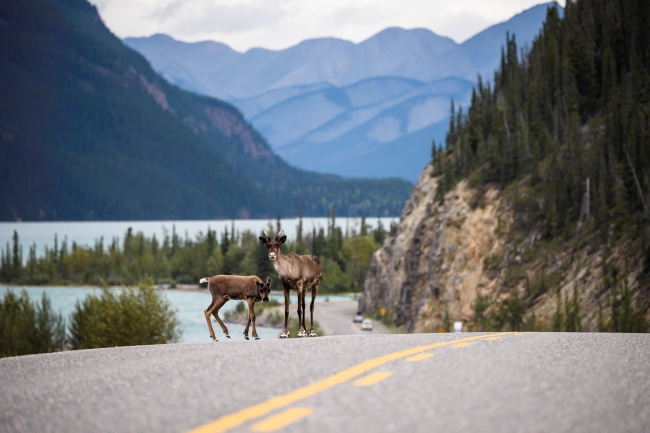 A caribou cow with her calf along the Alaska Highway at Muncho Lake, in the Northern Rockies of British Columbia. Photo: Andrew Strain

Northern BC is wild—and filled with creatures on land, in the sky, rivers, lakes, and sea. You can see herds of caribou and bison right from the highway in remote parts of the north, in addition to moose and deer, even elusive furry white mountain goats and Dall’s sheep.

Other highlights here are the bald eagles—hundreds in spring and summer near Prince Rupert or the Skeena River—and from a catamaran, grizzlies on Prince Rupert’s coast, especially abundant at the Khutzeymateen sanctuary.

Black Bears and Marmots in Whistler 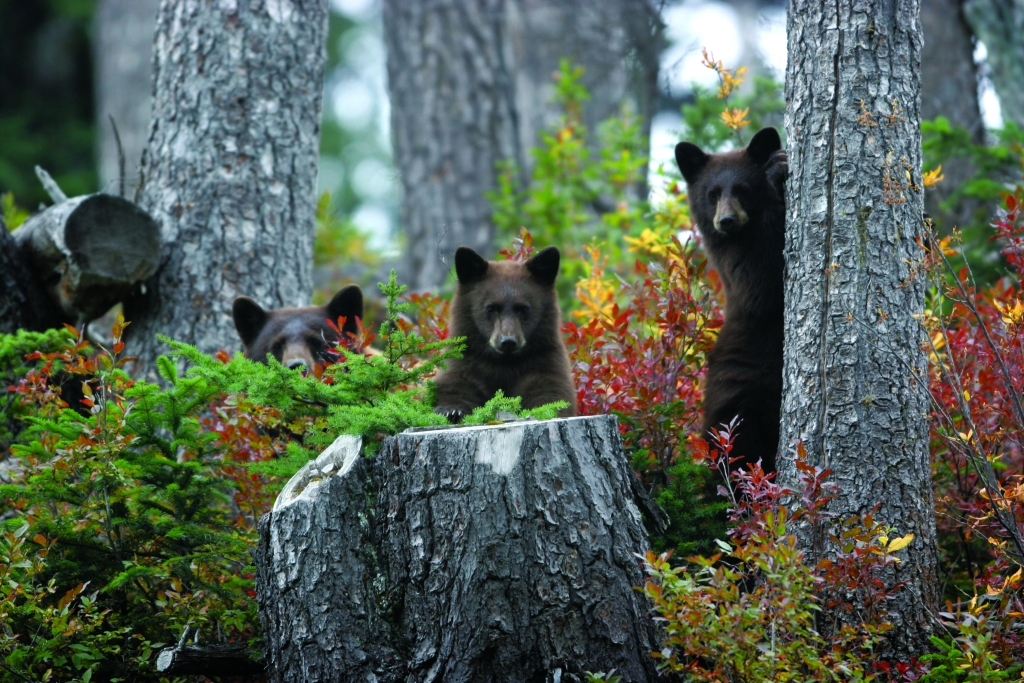 About 60 black bears come out of their long winter hibernation in ski/mountain-biking resort Whistler beginning in mid-April, including moms with cubs. Take a 4×4 tour  or a photo safari tour from May to October. Expect grazing bear families and males wooing females from mid-May to mid-July, or see them munching berries in July and August from the PEAK 2 PEAK Gondola.

In summer, bears can be spotted on the alpine hiking and biking trails. Watch for whiskey jacks, too, which like to land on hikers’ outstretched hands, plus frisky chipmunks, deer, and the town’s signature whistling marmots.

From: Bowen Island
Passionate about news, food, farmers, the outdoors, gardening and taekwondo, Michelle lives with her family on Bowen Island near Vancouver. She spends her time writing and editing for companies, plus skiing, hiking, horseback riding and lounging at the beach. Before moving to Canada, Michelle worked as a journalist for 25 years in the U.S. and Germany, including stints with The Wall Street Journal Europe, Gruner+Jahr/Bertelsman and the Albuquerque Journal. Her work has appeared in Outside, WIRED, Travel + Leisure, Sunset and Fortune. She has a Master’s in Journalism from Columbia.