Kamloops, located the at the confluence of the South and North Thompson rivers, is named for the Shuswap word “Tk’əmlúps.” The word means ‘meeting of the waters’ and for us it was the perfect meeting spot from which to pick up the third member of our party – who has a decades long history of touring the Kootenay area – and to begin our circle route trip through the Kootenay Rockies.

We headed south down Highway 97 and then cut over through Lumby, stopping for a much needed ice cream sandwich at The Emporium in Cherryville, BC (which is also home to a great Farmer’s Market). We followed the hand-painted map on the store’s concrete wall with our fingers and were dismayed to find that our initial intended destination was missing – apparently we were headed for nothing more than a giant crack! 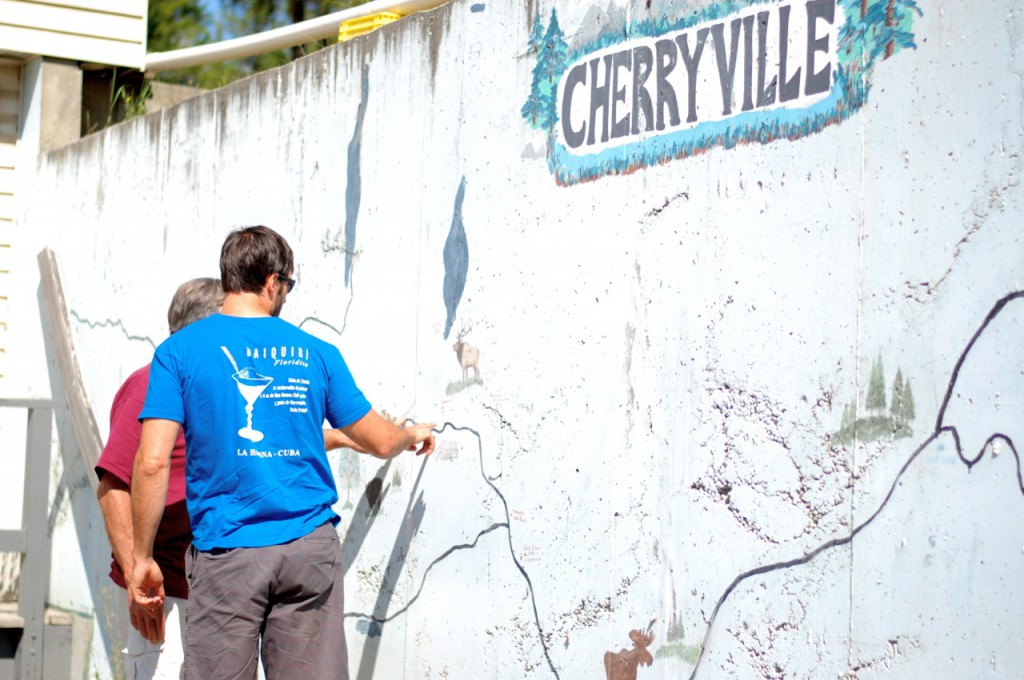 Luckily the weather was gorgeous, our leader knew exactly what route to take, we were stocked up with ice cream sandwiches, and the beautiful valley scenery surprised us at every turn. No one was bored on this trip! 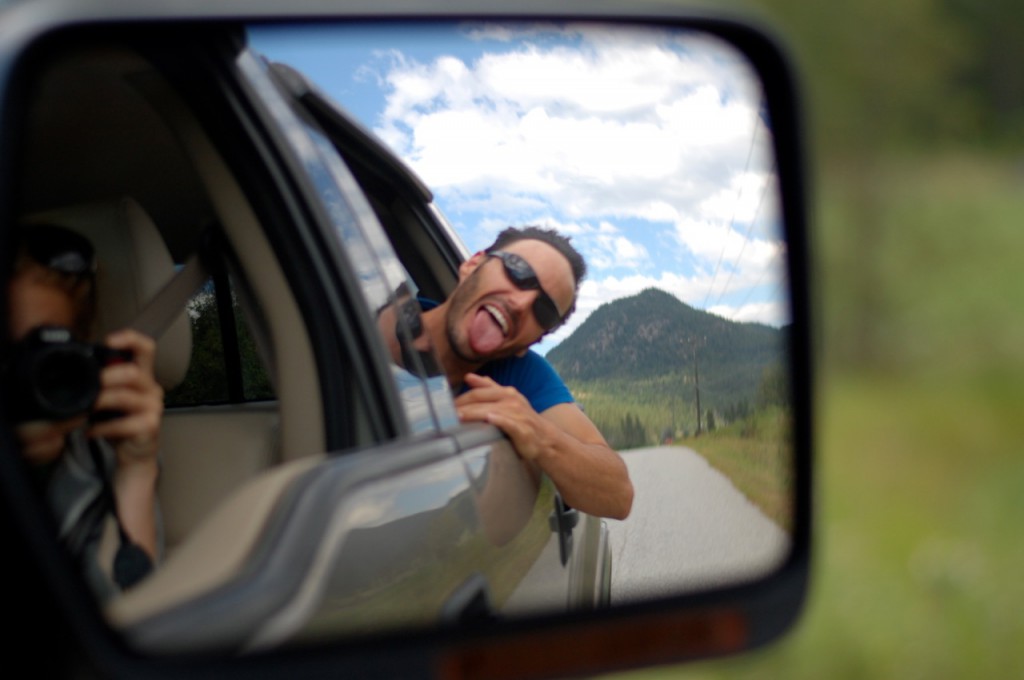 Just past Edgewood, we turned off to Lower Arrow Lake and went for a delightful swim.  The campground has facilities (complete with flowers in the outhouse!) and the beach below the hill is sand; perfect for a sun-tanning break. 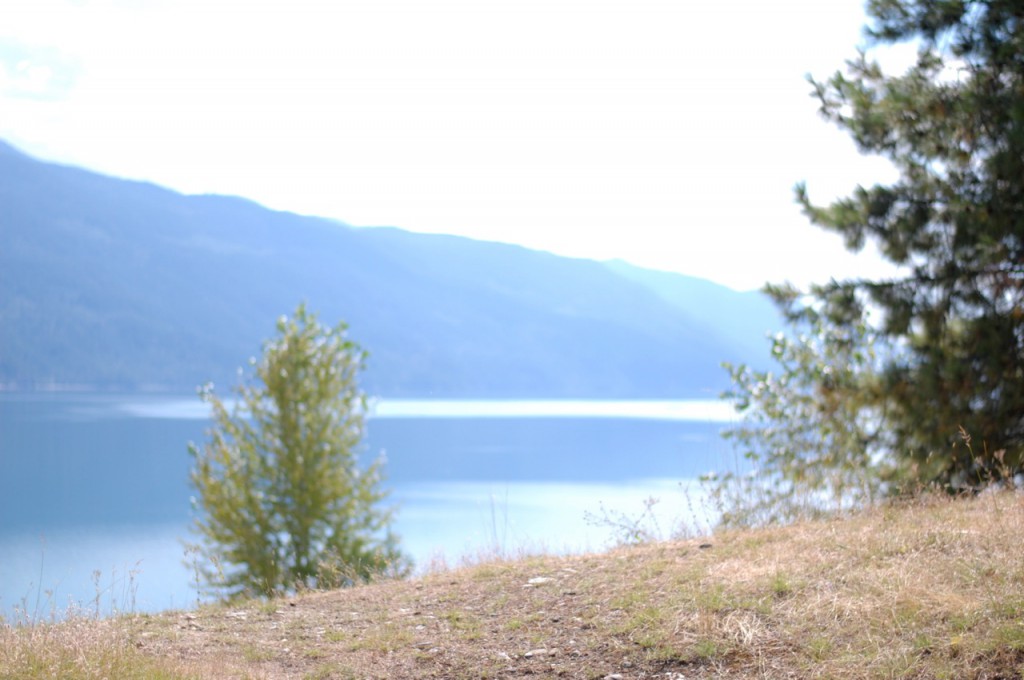 The names Upper and Lower Arrow Lakes are actually something of a misnomer. While originally two lakes, the Arrow Lakes became one long lake in the 1960s as a result of the Keenleyside Dam construction.

Refreshed and ready for the next part of our adventure, we lined up with a large group of motorcyclists (this is a wonderful road to ride) for the Needles Cable Ferry.  As the ferry crossed to our side of the lake, we watched the tug boats position log booms and enjoyed a picnic at the tables provided in the trees.

The cable ferry is free for travellers and pulls itself one kilometre across the lake to Fauquier using a winding drum on a pair of 1-inch-diameter (25 mm) cables, plastic coated to prevent wear, which are suspended in the lake. 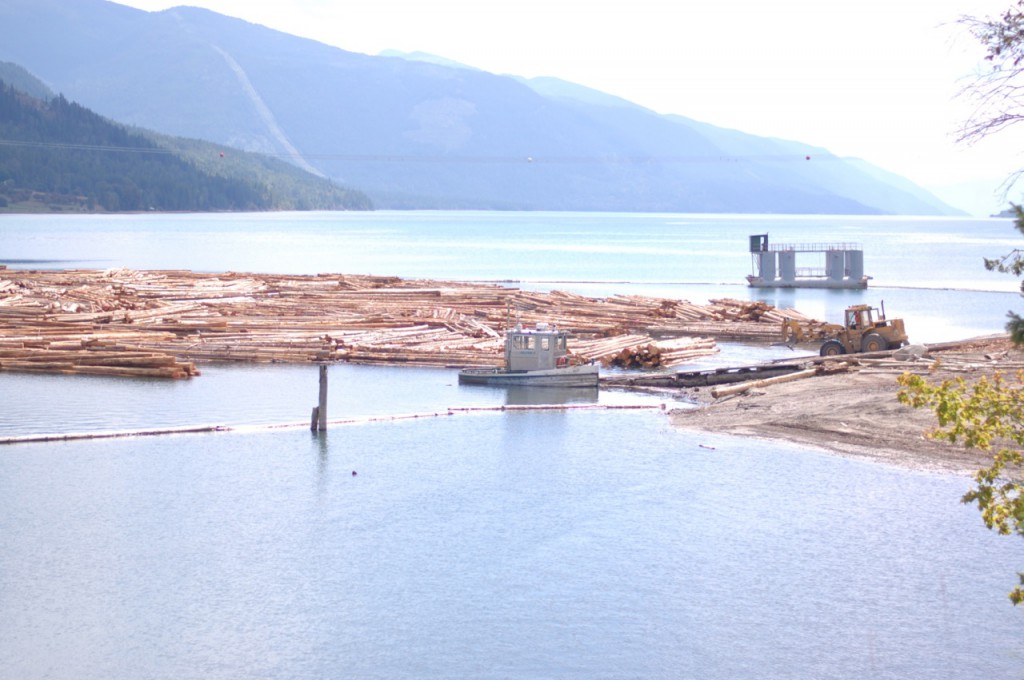 The clouds rolled in as we headed up the valley to Nakusp – well known as part of BC’s Hot Springs Circle Route – and the mountains were darkly awe-inspiring in their coats of blackened indigo from the reduced light. Our next stop was New Denver, an area literally rich in history (be sure to get your picture taken with the historic Lancet!).  In the 1800s, the town was known as Eldorado due to the nearby silver reserves but was renamed New Denver when it appeared the area would become richer than its namesake in Colorado, USA.  Consider spending the night here in one of Villa Dome Quixote’s round rooms, complete with an outdoor spa & sauna. 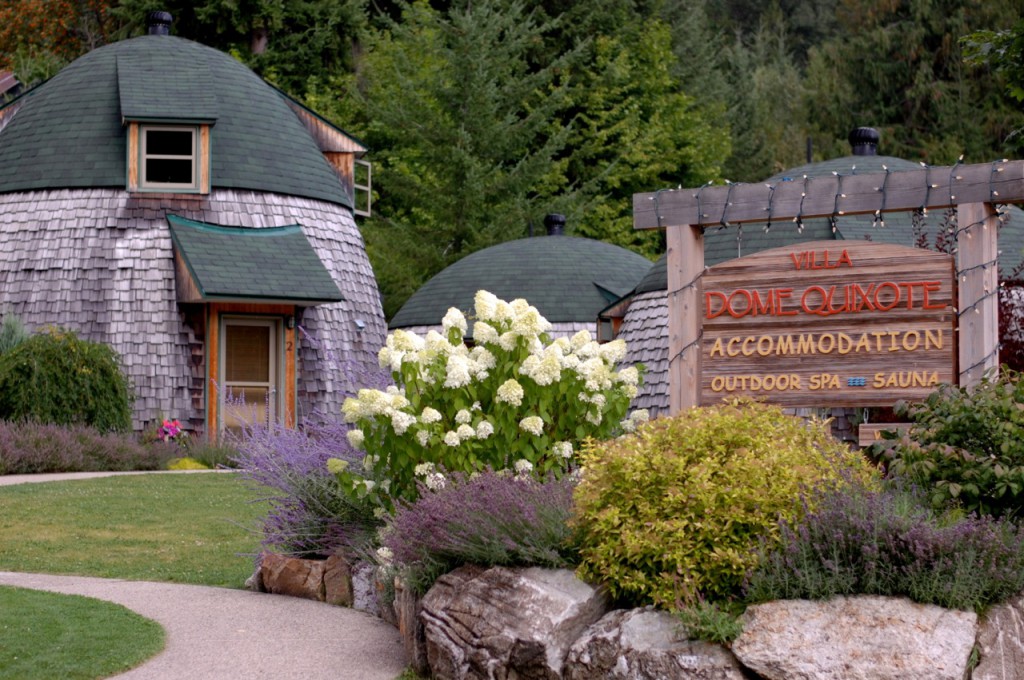 In Kaslo, the next town on our journey, we toured the S.S. Moyie, the world’s oldest intact passenger sternwheeler.  Kaslo is packed with outdoor activity opportunities as well as historic and heritage sites. Well worth a day trip in its own right. 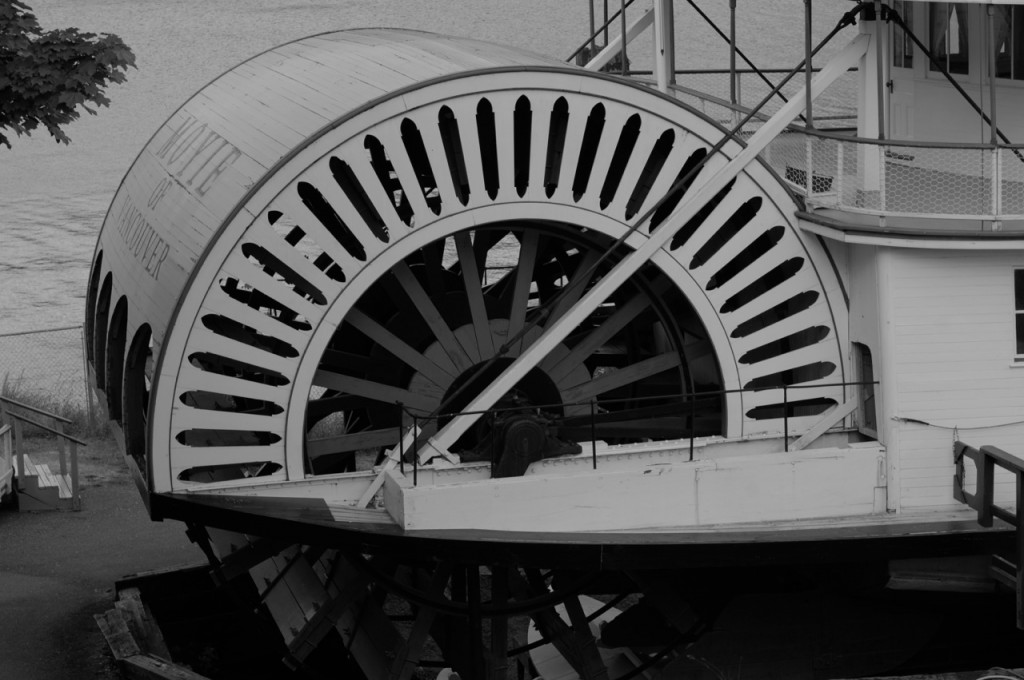 After spending a few days with family and friends in Howser, BC – a beautiful remote community – we continued our journey via the Trout Lake road.  The Trout Lake road runs along the old railway track line, and at times uses the original railway bridges. As you cross the first of such bridges, take a moment to realize that the largest rainbow trout in the world, the Gerrard Rainbow Trout, swim lazily in the waters below. 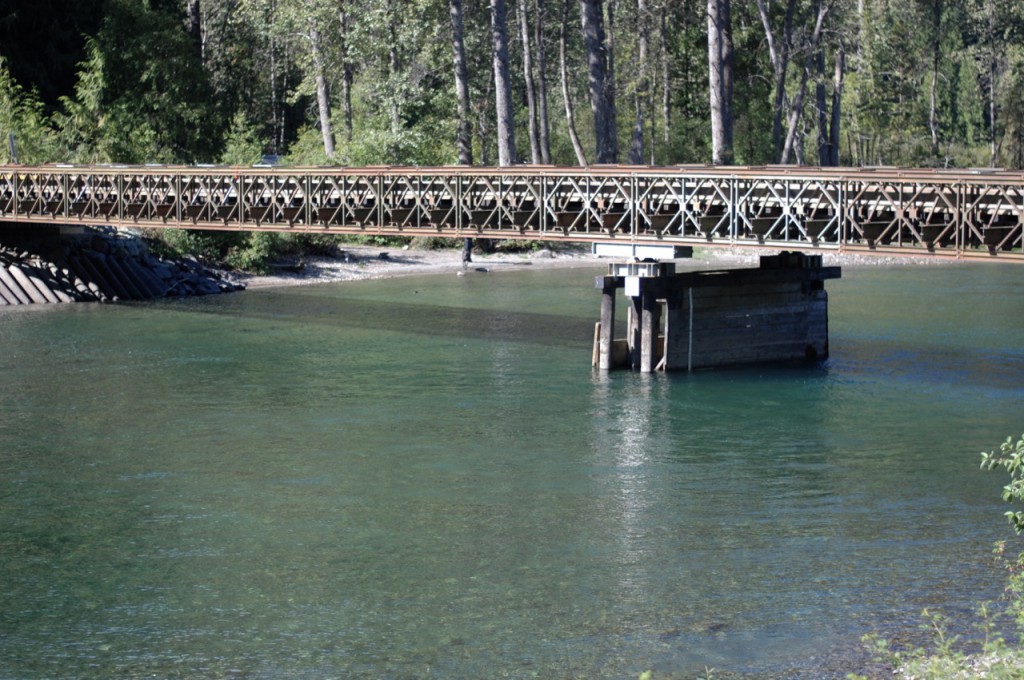 The dirt road winds through the mountains, offering nature photographers the most epic of views and lures you to the town of Trout Lake, home to the Windsor Hotel built in 1887 by Mssrs. McLennon.  The walls of the hotel are lined with historic photos of the area and it’s a great place to stop for lunch.  And then to Galena Bay for another free ferry ride!  This ferry is not cable-driven and ends in a ‘secret cove’ on the western side of the lake that is impossible to spot until you are nearly there.  If you arrive early for the ferry, there are numerous spots to dive into the glass-like waters as well as a stone beach where travellers often stop to build a mini-inukshuk or two. 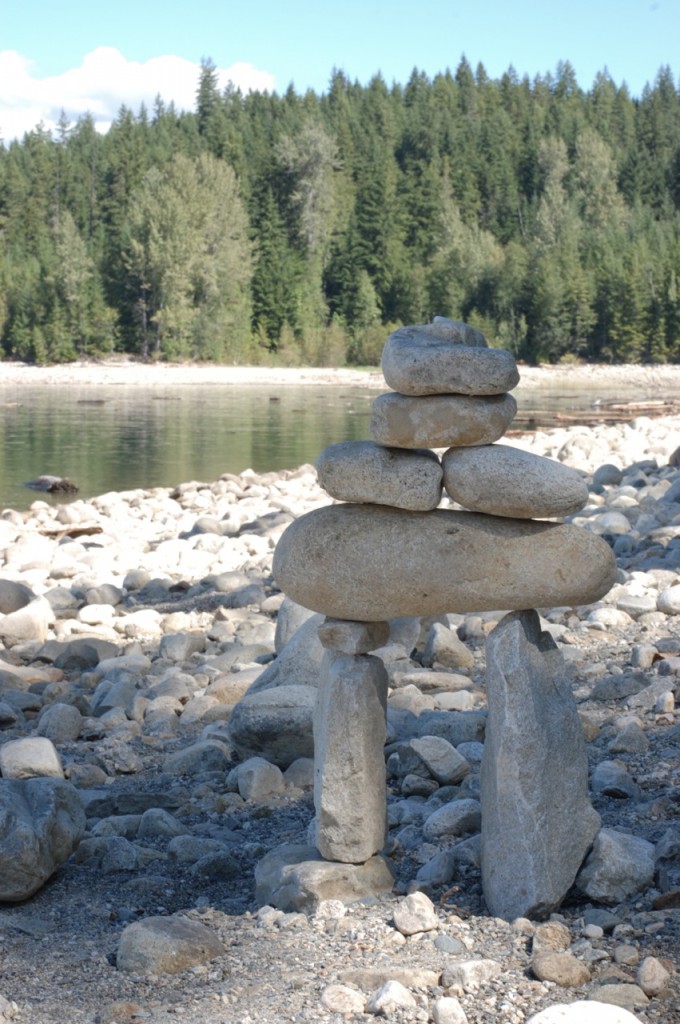 From the ferry terminal, we headed north on Highway 23, took a hard left at Revelstoke (we’ll spend more time there on a future trip) and then re-linked up with the Trans-Canada Highway, taking us through Salmon Arm, and closing the circle back in Kamloops.

Oh! And don’t forget to make a stop at “The Burner” on the last leg of your journey, just a little ways past Revelstoke.  The restaurant is located inside a refurbished waste wood “beehive” burner from the Beaumont Mill in Malakwa, BC.  The inside is furnished with large timbers from the Malakwa area, milled on site and is, quite literally, a one of kind restaurant with tasty food.  And we’re still taking bets on what the rusting machinery out back is… our current favourite theory is a 1930s ‘log buggy’ similar to the “Willamette” model.