Has dining out become a little too “been there, done that” for your taste? Want to sample something different? Here are a few places to try.

Dining in the Dark, Vancouver

It’s lights out at Vancouver’s Dark Table, where you explore sensory delights sans illumination. A major hit in London, New York, and Montreal, blind dining in Kitsilano turns traditional dining on its head. How? You’ll make your menu choices in the restaurant’s lighted lounge; your cellphone, luminous watches and the like are turned off here. A blind or visually impaired server then leads you to your table in the dining room, where the temporary loss of sight will heighten your remaining senses, elevating the flavours and nuances of the meal. 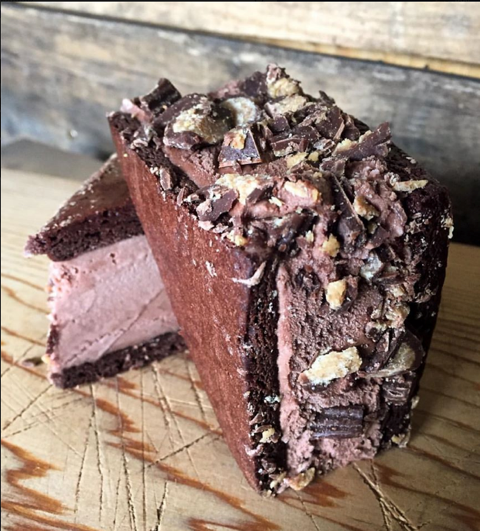 It’s not often that you’ll find a full-service motorcycle shop that’s known for its homemade ice cream sandwiches. In Victoria, Wheelies Motorcycles draws motorheads and Sunday brunch-ers to its Rock Bay Avenue café and shop for chocolate fudge brownie ice cream sandwiches. Their slow-cooked, root beer-braised pork sandwich alongside inventive drinks like the Driveshaft (whiskey, Kahlua, Bailey’s, fresh espresso, and milk) are also crowd pleasers. Peruse the menu, then check out the work—including fabrications and custom upholstery—in the shop. If it’s a live music night, order a beer and wait for the show to start. 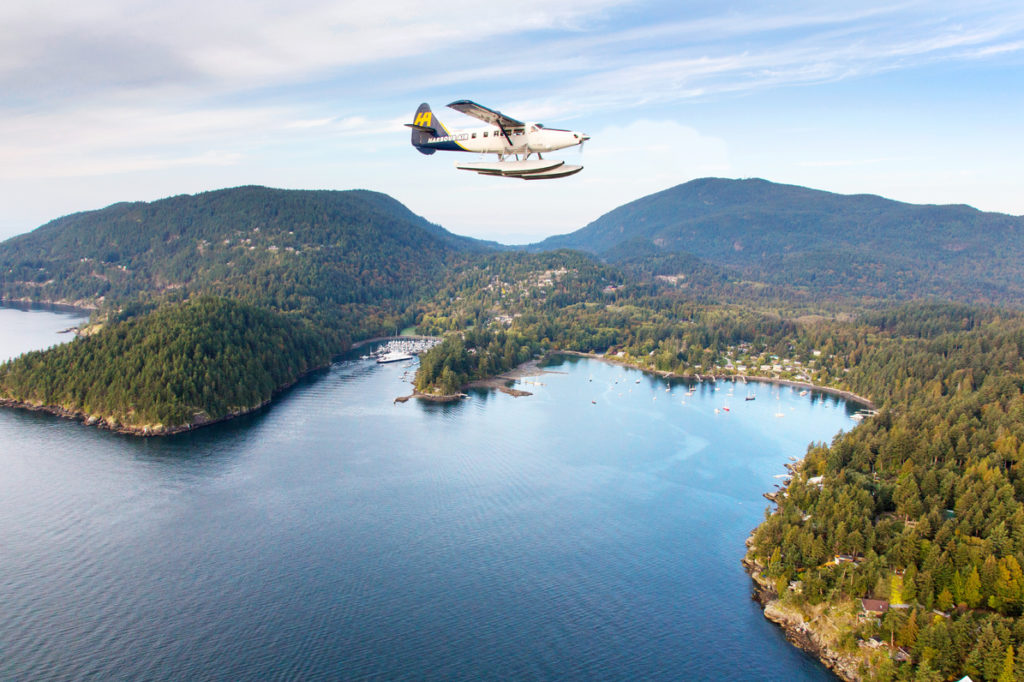 For a change of scene, Fly ‘n Dine to Bowen Island. A 20-minute Harbour Air seaplane ride from Vancouver’s Coal Harbour brings you to Bowen Island for a three-course dinner at Doc Morgan’s. Here, local favourites include dark ale-battered fish and chips, chowder thick with crab, shrimp, and salmon, and homemade apple crumble topped with vanilla ice cream. When you’re done, walk to the ferry at Snug Cove for a trip to Horseshoe Bay, where a limousine puts it in drive for the return ride home.

In Kimberley, the Old Bauernhaus Restaurant serves hearty fare in a building steeped in history; more than 350 years old, it was dismantled in Germany and transported to Kimberley, where it stands today. It’s the perfect setting to savour schnitzel, or, if you’re feeling ambitious, the restaurant’s multi-course Bavarian Feast. What to expect? A range of appetizers, including baked brie, garlic prawns, and bauernplatte (house-cured meats), and a family-style main course that features jagergeschnetzlte (a meat dish served with mushroom cream sauce), spatzle (German noodles) and more. Prost (cheers)! 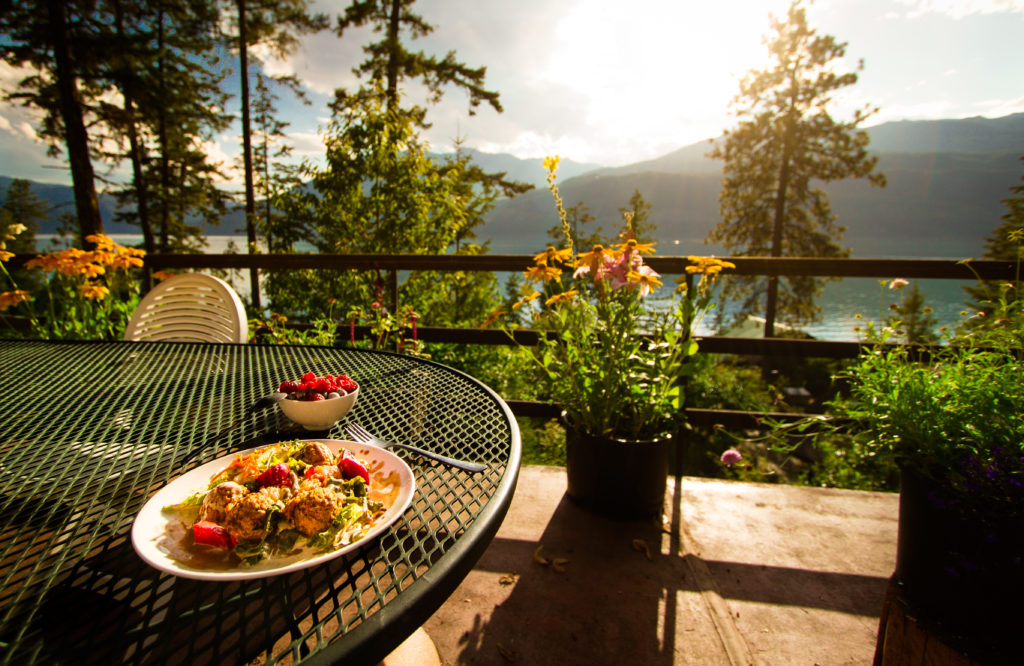 Lunch at the Ashram, Kootenay Bay

While many seek enlightenment over weeks of self-reflection at the Yasodhara Ashram, you can enjoy a Taste of the Ashram in just one day. Founded by Swami Sivananda Radha, the yoga retreat is one of the longest-running spiritual communities in North America, and it offers a lovely view of Kootenay Lake—perfect for a nutritious lunch of homemade soups, spreads, and vegetables grown on-site. (Vegan and vegetarian options are available.) Tip: come early for a Hatha yoga class, where you can downward dog your stresses away before it’s time to eat. 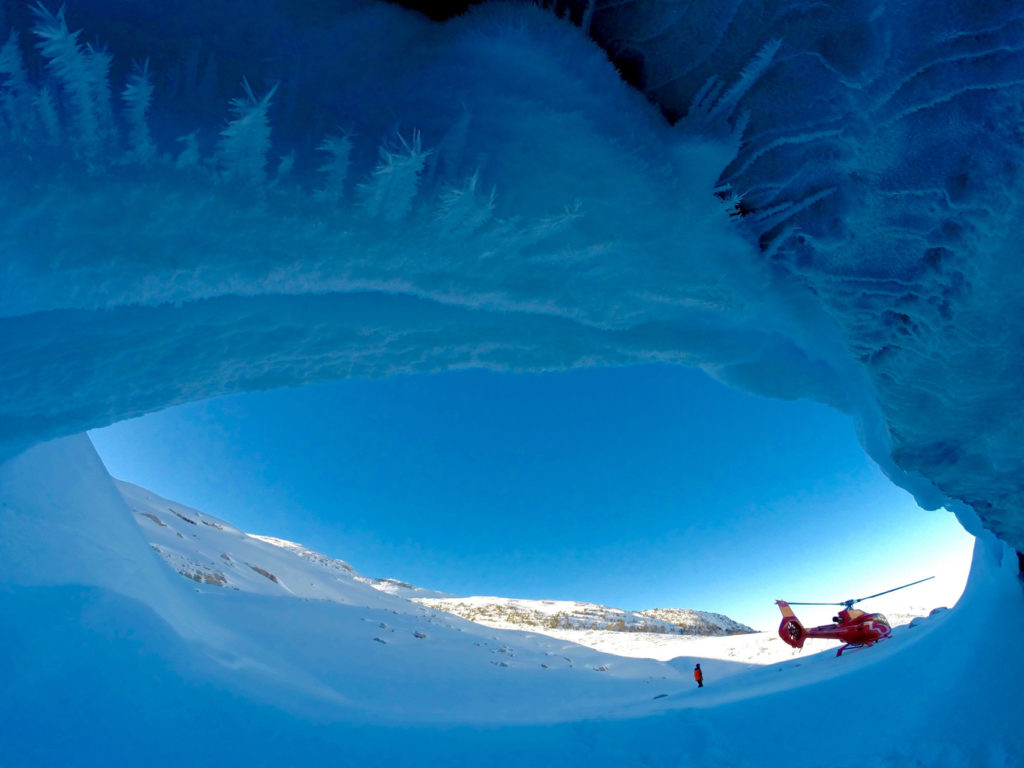 A helicopter transports you to an ice cave near Whistler during the Taste of Place. Photo: Four Seasons Hotels

Dining experiences are seldom ordinary at Whistler’s Four Seasons hotel. Case in point: Taste of Place, where a private helicopter transports you to a remote glacier, just beyond the four-season mountain town. Clad in a Canada Goose jacket and Sorrel boots (as Canadian as it gets), you’ll explore an ice cave and its labyrinth of aqua-blue chambers, where you’ll chip away glacier ice for cocktail hour. Once you raise a glass, it’s back into the whirlybird for a return trip to a private residence, and a decadent chef-prepared meal. 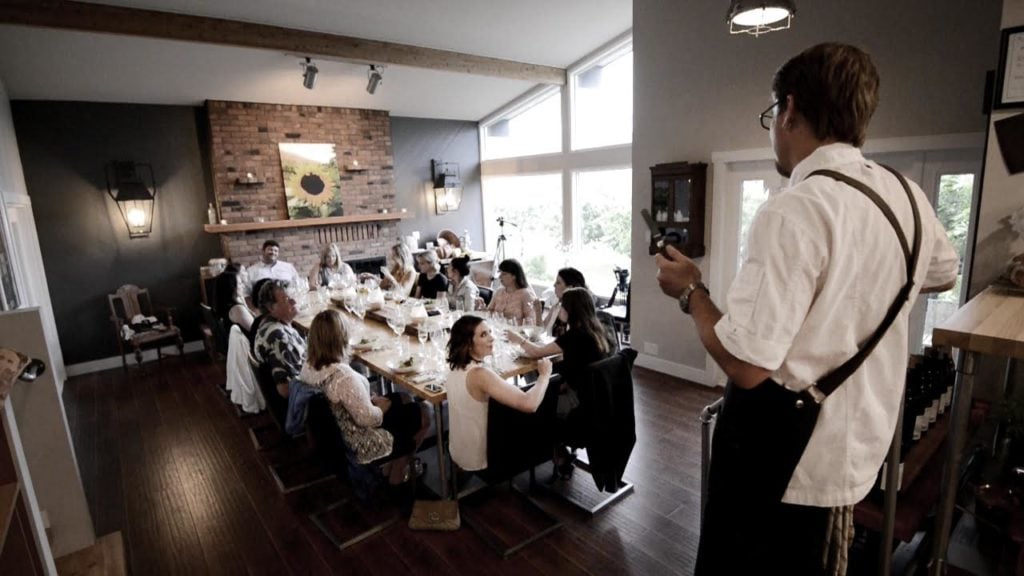 You’ll get more than a meal when you venture to Backyard Farm’s Chef’s Table in BC’s Okanagan, where private, multi-course culinary demonstrations and workshops are led by chef Chris Van Hooydonk. Ingredients are sourced from the farm’s two-acre heritage orchard property; local farmers, producers, ranchers, and fishermen round out the culinary complement. Seasonally inspired menus are often paired with handcrafted sauces and chutneys, vinaigrettes and pickled vegetables. As a bonus, you’re welcome to sift and stir in the kitchen, should you choose, or sit back and watch the action from the sunken dining room below.