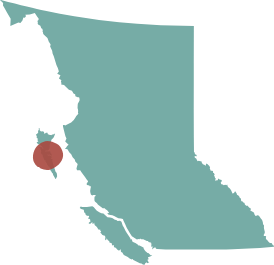 Haida Gwaii is the ancestral territory of the Haida Nation. This storm battered archipelago of 150 rocky islands off British Columbia’s West Coast is tricky to access at times, which only adds to its allure. With its diverse plant and animal life (the area is nicknamed Canada’s Galapagos), and monumental poles and longhouses, there is something new to learn for everyone.

The islands are home to dramatic landscapes, abundant wildlife, and some of the world’s richest heritage, home to more than 500 archeological sites. Haida Gwaii’s climate produces lush vegetation and abundant wildlife. Groups of Sitka deer feed on the grassy clearings along Highway 16 (the Queen Charlotte Highway), and eagles—often in large convocations—can be seen flying overhead in spring and summer.

The largest communities on the islands include the Village of Daajing Giids, HlGaagilda (Skidegate), and Massett, all located on Graham Island. Gwaii Haanas National Park Reserve is located in the southern islands of Haida Gwaii, and is accessible only by boat or seaplane.

Island waters teem with sea life.  The islands are a seasonal home for grey whales, humpback whales and orcas, along with seals, sea lions, porpoises, and marine birds.

Alaska View Lodge is located along the north coast of Graham Island, between the town of Masset and Tow Hill. The lodge sits right on the beach...

This Motel has 29 rooms and friendly staff.

Want to recharge? Here are unique accommodations in BC that are sure to restore your energy.